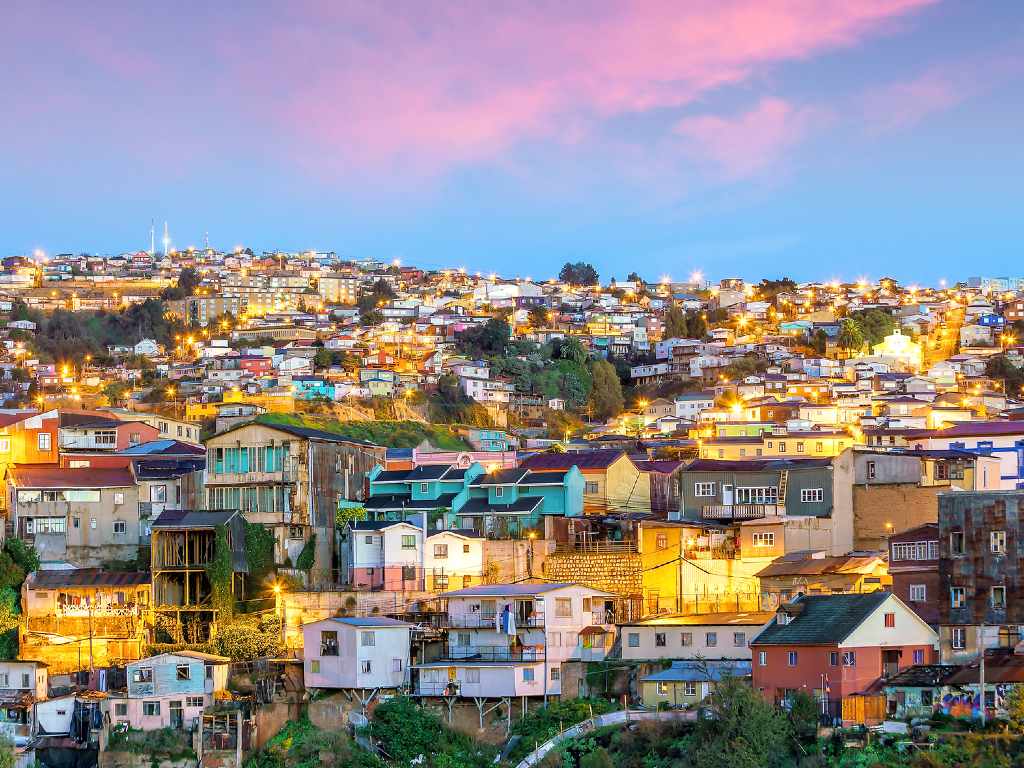 Valparaíso, or Valpo to the locals, is a maritime city overlooking Chile’s Pacific coastline, about 90 minutes from the nation’s capital, Santiago.

While brimming with color, culture, and culinary delights, Valpo has seen better days. This former artery to the capital arguably peaked in the latter half of the 19th century during its heyday of booming development.  What’s left is a beguiling, romantic—if slightly dilapidated—hub that a multicultural population of 300,000 Chileans calls home.

One in every port

Founded by Spanish conquistador Juan de Saavedra in 1536, Valparaíso has clung to the seaside hills from day one and its rich history is intrinsically tied to the sea. Since Chile’s independence from Spain in 1818, Valpo has been home to the country's naval base and one of its largest seaports.

Unsurprisingly the ocean plays a main role in the city's rise and fall. Valparaíso saw a huge boom in the 19th century thanks to the city’s strategically useful position for entrepreneurial Europeans who stopped here while refueling their ships en route to California during the Gold Rush. In fact, it’s still regarded by UNESCO as one of the best examples of 19th-century architecture and urban development in Latin America.

The inauguration of the Panama Canal in 1914 meant the end of European sea traffic passing by the city. With that went the regular cash injections, so Valpo’s fortunes fell as the rich and famous flocked to neighboring Viña del Mar. But the last few decades brought a small renaissance as Chile’s creatives moved in and made the city a hotspot for artists, musicians, and poets.

I just want to dance the night away

Valparaíso has a small but thriving clubbing scene thanks to the student population from its universities and young creative residents. While its infectious reggaeton and salsa are not an unusual fixture in South American nightclubs, its thriving LGBTQ+ community stands out, with Valpo lovingly known as “the mini Berlin on the sea.”

Pack your best walking shoes for a trip to Valparaíso, as it’s one hilly old city. The winding streets hit you with steep and sudden inclines/declines when you’re least expecting them. Local tourism leaflets will tell you there are 42 hills but you’ll swear there’s more.

Thankfully, a series of public ascensores (steep funicular railways) help transport locals and visitors up the hills. There is a minimal fare, and you’ll get some great views of the city and experience a moment of time travel. Plus, your thighs will thank you.

Also worth riding are the city’s vintage trolley buses, a group of 1950s Pullman buses that still roll along route 802 and take you on a scenic, if unnecessary, adventure.

Valparaíso on a plate

The food options in Valparaíso are widely varied, more so than other towns and cities in Chile (barring the capital, of course). You can put this down to its position on the aforementioned route to California, back in the day. Consequently, Valparaíso was an early example of globalization in action, a truly metropolitan city that people emigrated to from around the world—and its enduring international population is reflected in its cuisine.

Cerros Alegre and Conception are particularly good for pizza, pasta, ramen, and sushi, the stand out being the fluffy Neapolitan-style pizzas at Malandrino.

If you want to try a local delicacy, check out chorrillana, a meat feast of minced beef and fried egg heaped on a plate of french fries. This Valparaíso staple is thought to date back to the 16th century and can be found for sale in little bars such as Casino Social J Cruz, where a plate is best shared with a few friends.

The first thing visitors to Valpo are struck by is its distinctive colorful houses, making the view across the valley an explosive rainbow-like scene. Hotel Brighton is one of the most visible buildings in the city—a bright yellow building on the highest hilltop overlooking the port.

This spectral tradition dates back to the 19th century when city dwellers would source any old leftover paint from the dockyard to slap on their homes to protect them from damage and weathering. Perhaps thanks to becoming a UNESCO World Heritage site in 2003, this Valpo decor lives on, reflecting the spirit of the city and playing a solid role in its regeneration, attracting a new generation of artists and creatives.

Internationally revered Nobel Prize winner Pablo Neruda was Chile’s most beloved poet, politician, and a staunch campaigner for social justice. His poem Ode to Valparaíso gives the reader a taste of the poet’s mad love affair with the city.

His house in Valparaíso, called La Sebastiana, remains one of the city's most attended tourist attractions. Poetry pilgrims and fans of his politics alike flock to view this unusual, delightful crow’s nest of a house museum perched atop of the highest hills, providing 360-degree views of the city as you move through the warren of staircases and terraces.

The quirky, dream-like work and living spaces were all designed by Neruda himself, who collected furnishings—often with a nautical theme—that allowed the depths of his imagination to run wild. It’s the merry-go-round horse in the middle of the living room though, that delights guests from all over the world. La Sebastiana is one of three of Neruda’s houses; be sure to track down his homes in Santiago and Isla Negra to complete the trilogy of homes.

You don’t have to be a street art connoisseur to recognize the world-class quality of walls painted up on Valpo’s cerros (hills). The city is an open-air art gallery these days with artists coming to paint from all corners of Chile. Graffiti has no doubt always existed here in some form, like in any busy city, but it was in the early ‘00s when the city was awarded its UNESCO World Heritage status that the street artists arrived en masse and the locals began to invite artists to use their walls.

Have a wander or take a guided street art tour around cerros Alegre, Bellavista, Carcel, Concepcion, Miraflores, and Panteón to find impressive murals that cover everything from humor to politics, and be sure to keep your eyes peeled for the government-commissioned pieces by the most famous street art couple Un Kolor Distinto. The couple’s large-scale work is a highlight of the Valpo street-art trail and unlike most, they sign their work with a recognizable logo. Their most famous work, "Solsticio de Verano" (Summer Solstice), is a colossal piece covering the ten-story Centenario apartment building at 168 Bellavista.

He who shall not be named

General Augusto Pinochet was born in Valparaíso in 1915 and spent his school life in the city before joining military school in the capital. He famously staged a coup d’etat on September 11, 1973, and his violent dictatorship is synonymous with Chilean history (for Americans born before the 1960s, it’s often the first thing that comes to mind about the country).

Pinochet’s rule was a lengthy one and included 17 years of unlawful imprisonment and torture of an estimated 60,000-80,000 leftist intellectuals and socialists who supported the previous, democratically-elected President Salvador Allende. It’s estimated that more than 3,000 people died on Pinochet’s order by the time the regime ended and democracy returned in 1990 after overwhelming public protest.

While the temptation may be strong to bring Pinochet up in conversation, navigate such sensitive historical conversations with caution—with one Chilean at a time and never in a group, as opinions are so divided that you will likely find yourself in the middle of a heated argument otherwise.

Many Chileans feel Pinochet brought economic progress by deregulating the financial market and privatizing public organizations, which produced a sizable financial boom under his reign. But his rapid introduction of capitalism widened the gap between Chile’s rich and poor. The effects can be seen today in the recent fierce protests for social equality.

Chilean director Pablo Larraín has shot three movies in Valpo. Fuga (2006) takes place in part in Valparaíso and Neruda (2016) of course includes scenes of the poet at his Valpo home La Sebastiana. But it is Larraín’s most recent film, the 2019 movie Ema, that provides the most vivid picture of Valparaíso.

This dreamy, artsy flick starring Gael García Bernal and Mariana Di Girolamo, with a soundtrack by Chilean wunderkind producer Nicolas Jaar, is the story of a dancer in a failing marriage to her choreographer husband as she embarks on an elaborate plan to get back the adopted son she gave up. The film was entirely shot on location in the city—so much so that the architecture becomes a character in the film in its own right.

Read our guide to budget airlines in South America and join Scott's Cheap Flights to save hundreds on flights to Chile and around the world.

Thank you! Your submission has been received!
Oops! Something went wrong while submitting the form.
Last Updated
March 13, 2021 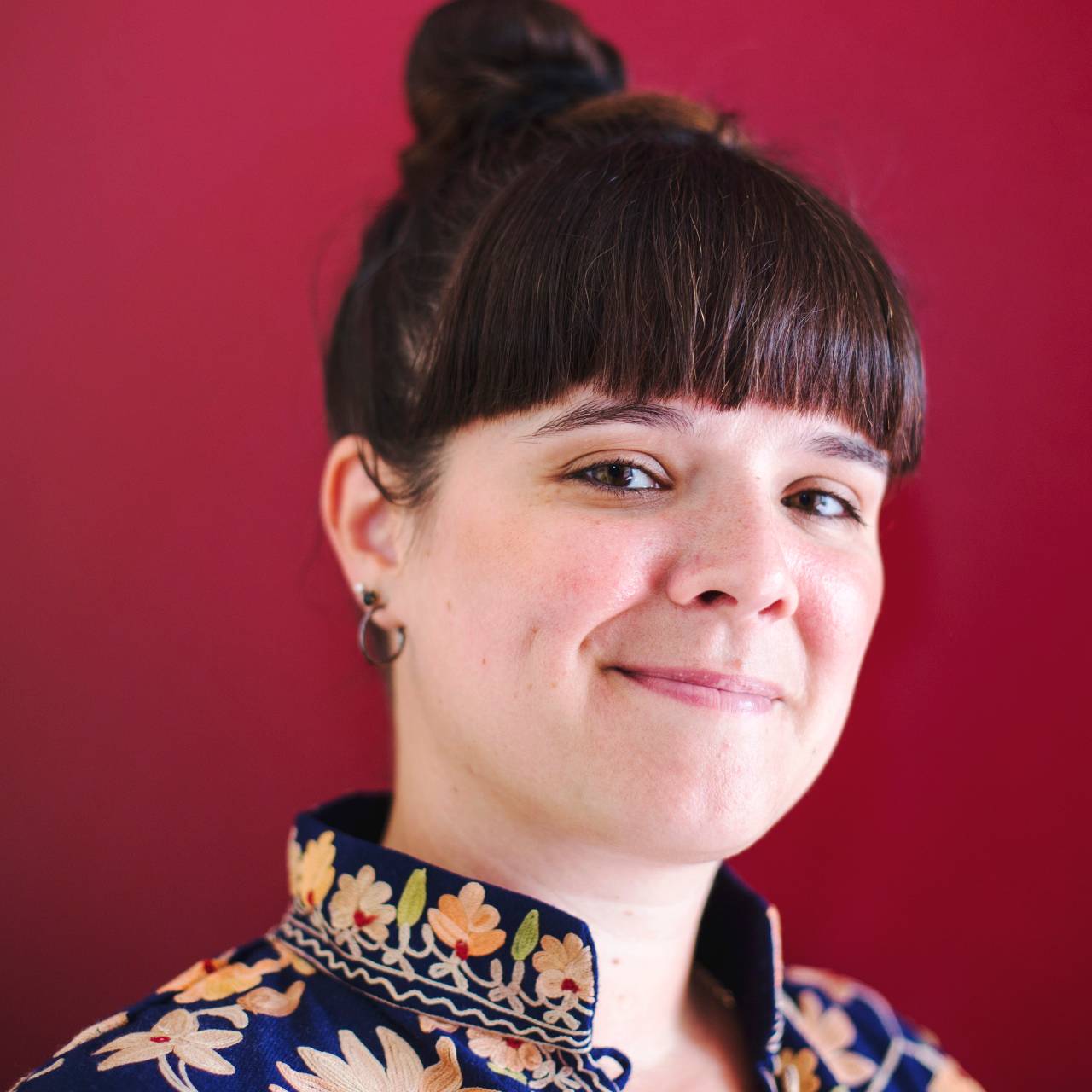 Lucie is a freelance writer and researcher currently based in India. During her grad school studies, she was lucky enough to take part in an Erasmus exchange program, first visiting Valparaíso in 2018. She traveled in South America extensively throughout 2019 and always came back to Valpo as her favorite city.