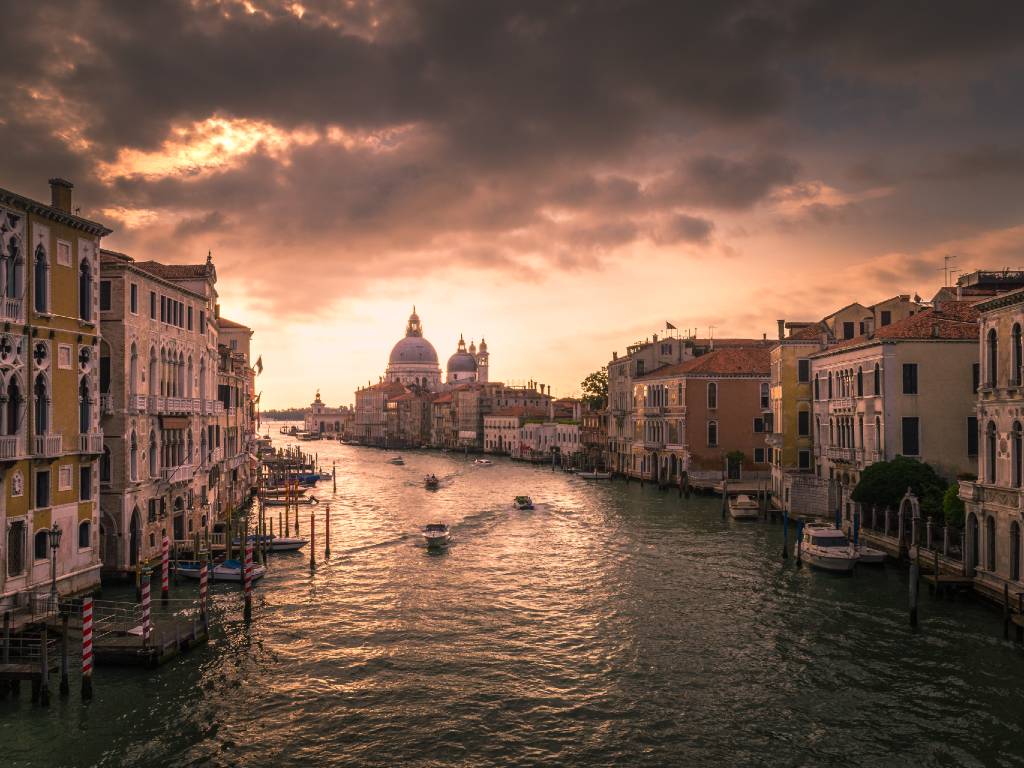 Lost in a living museum

Venice tends to evoke passionate responses from visitors—both good and bad. The Canal City is undeniably beautiful and surreal, just as it’s often overcrowded with tourists. But despite how it might look at times, Venice is a real, functioning city, not an open-air museum. What some might call a “more authentic” Venice is easily found steps away from the tourist crowds, where quiet corners beckon, the only sound is water gently splashing against canal walls, and the city’s early Byzantine-era nickname of La Serenissima (Most Serene) still applies.

Early mornings and late evenings, when Venice is left to residents and overnight visitors, are equal parts enchanting and eerie. And getting lost is simultaneously impossible (you’ll eventually hit water) and the best thing you can do.

How to build a city

Venice is called an “island city,” but in truth it’s actually a collection of more than 100 tiny islands connected by 400-plus bridges spanning the city’s famous canals.

When settlers first arrived in the 5th century CE, most of the lagoon’s islands were marshy and uninhabitable. The solution? Drive thousands of tree trunks into the lagoon floor to create platforms. And that’s still what’s holding up much of the city today. The wood, never exposed to air, petrified underwater rather than rotting—so some of the posts holding the modern city up are more than 1,000 years old.

Watch this long but fascinating behind-the-scenes tour of Venice to learn more about how the city was built as well as how it’s maintained today.

There’s only one place on the main Venetian islands where you’ll find cars and other motorized land vehicles: the city’s sole parking lot. Otherwise, all transportation is by boat. And yes, that includes taxi boats, bus boats (called vaporetto), moving service boats, delivery boats, and even fire and police boats.

Piloting a gondola takes a long time to master. Venice’s gondoliers must attend a special school for 12-18 months for rowing training and classes in history, geography, and foreign languages before they can apply for a license. Even then, a licensed gondolier has to serve one year on a traghetto route before being allowed their own gondola.

Historically, membership in the exclusive gondolier guild was passed only from father to son within families, and though the profession is still overwhelmingly male, there are now a few women gondoliers. The official gondolier uniform consists of black pants and shoes and a white striped shirt—the only choice is whether the other stripes are blue or red. The straw hat isn’t traditional, and is technically optional, but most gondoliers wear it anyway.

The shifting tides of fortune

Venice had humble beginnings. The original 5th century settlers chose the marshy lagoon because it was hard to reach—they were fleeing Attila the Hun. Within a few hundreds years, Venice had risen in stature and wealth, and by the 13th century, the Republic of Venice was a strong maritime power. At its peak, there were more than 200,000 people living in Venice.

The city’s slow decline began in the 15th century and was hurried along by the opening of new trade routes, two plague outbreaks, and much more recently, the increasing cost of living as foreign investors buy up properties for vacation apartments.

Today, there are less than 55,000 people in the main island cluster, and that number shrinks by 1,000 or so every year. Contrast that with 30+ million annual tourists and Venice can feel more like an amusement park than a real city. Mass tourism is partly responsible for the city’s sinking (cruise ships and motorized taxi boats damage building foundations) and the overabundance of day trippers burdens the city’s fragile infrastructure without giving much money back to the local economy.

On the other hand, tourism is an enormous part of Venice’s economy. In 2019, Venice announced plans to charge a tax on day trippers to help keep Venice afloat—figuratively and literally—and ensure that future visitors can experience the city’s magic.

Salt cod, sardines, and a spritz

Though Venice doesn’t have the worldwide culinary reputation of some other Italian cities, eating well in Venice isn’t hard—the locals, after all, wouldn’t tolerate a city full of terrible restaurants. Around happy hour, bars around Venice draw hungry diners with cicchetti (chick-ET-ee), bite-sized snacks that often feature seafood from the lagoon. A small glass of prosecco or local wine is a perfect accompaniment to a selection of cicchetti.

Craft your own Venetian happy hour at home with popular cicchetti like grilled polenta with baccalà mantecato (made from dried salt cod) or sarde in saor (sardines in a sweet and sour sauce). One of Venice’s classic cocktails, the spritz, is a great accompaniment.

Sick of the word quarantine? Blame the Venetians

Though some aspects of traditional Venetian culture have sunk into the background in recent years, the Venetian language lives on. Everyone in Venice today speaks Italian, but many also continue to use the historic Venetian tongue. What’s more, you’ve probably used words with Venetian origins without realizing it.

For example, the most-heard word of 2020—quarantine—comes from the Venetian term for the 40-day isolation once imposed on ships that arrived in port with any illness. Quaranta is the word for forty.

Venice has inspired artists for centuries, but much of the art for which the city is famous is contemporary. The Venice Biennale is one of the art world’s biggest festivals; Ca’ Pesaro, a Baroque palace on the Grand Canal, is home to the International Gallery of Modern Art; and one of the most beloved art museums in Venice is the Peggy Guggenheim Collection.

Venice is routinely described as romantic, but there’s a dark past, too. Less than four miles from the main part of Venice, the tiny island of Poveglia is now home to only ruins and (some say) ghosts. It was a quarantine station for travelers who arrived in Venice carrying the plague for more than a century, and later housed a mental institution.

Some estimate there are more than 150,000 people buried on Poveglia, many in mass graves. No one has lived on the island since the late 1960s, and tours are prohibited, but it’s said to be one of the most haunted places in the world.

Even one of Venice’s top attractions isn’t the romantic spot many believe. The Bridge of Sighs gained its romantic reputation from the 1979 film, “A Little Romance,” in which a kiss beneath the bridge gives a couple lifelong love. In reality, the bridge connected the city’s old prison with the new one across a canal. The “sighs” were said to be from prisoners getting their last glimpse of the outside world before being thrown in a cell.

High water in a sinking city

Is Venice really sinking? The short answer is, “It’s complicated.” Due to a combination of things including climate change and an increase in motorized boats and behemoth cruise ships in the city, water levels have risen noticeably and the fortifications keeping Venice afloat are eroding faster than they used to. The annual rate of “sinking” averages 1-2 mm per year and many ground floors of canal-facing buildings are now partially or totally submerged.

When the tide coming in from the lagoon is particularly high, parts of Venice experience flooding—known as “acqua alta,” or “high water.”

The artisans of the outer islands

There are more than 50 islands in the Venetian Lagoon. One of the most popular (aside from the centro storico cluster) is Murano. It’s been internationally known for its glass making since the 13th century, when Venetian glassmakers were forced to relocate there to keep potentially deadly fires from consuming the city. Colorful Burano has been known for handmade lace since the 16th century. And, believe it or not, there’s even an island in the Venetian Lagoon with a vineyard.

If it was good enough for Shakespeare...

Venice’s surreal scenery and fascinating history makes it an ideal place to set a novel or film a movie, so it’s easy to immerse yourself in La Serenissima from the comfort of your couch.

Shakespeare set both “The Merchant of Venice” and “Othello” in Venice, as did Donna Leon with her series of detective novels. And you can read the true story of the fire that destroyed Venice’s opera house in 1996 (the third time that the aptly named La Fenice, or “The Phoenix,” has burned down) in John Berendt’s “The City of Falling Angels.”

Venice has also played many roles on the silver screen, including in “The Italian Job,” which replaces the usual action thriller car chase with a boat chase through the canals. Fellini’s 1976 film, “Casanova,” was not only filmed in Venice, its protagonist was one of the city’s most famous sons—18th-century writer and infamous womanizer, Giacomo Casanova.

>>Check out our tips for your first trip to Europe or read our travel guide to Venice. And join Scott's Cheap Flights to save up to 90% on flights to Venice and around the world!

Thank you! Your submission has been received!
Oops! Something went wrong while submitting the form.
Last Updated
March 4, 2021