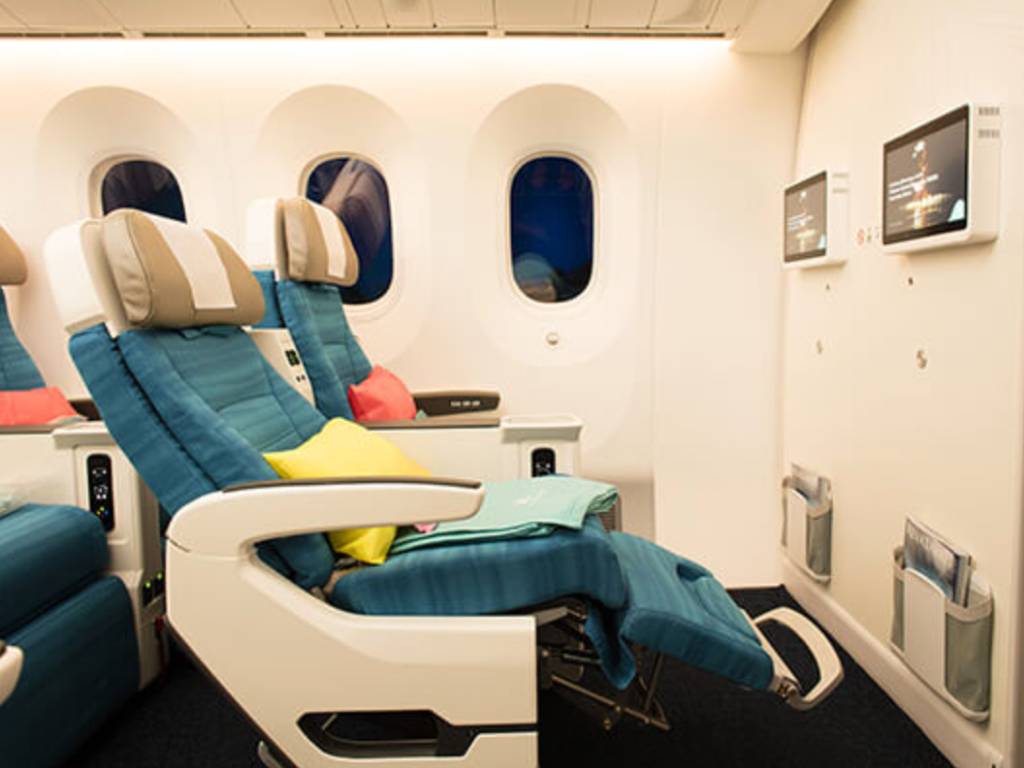 Many travelers are familiar with first class and business class, but during the last decade or so, there’s been a new class creeping into the product suite of carriers around the world—premium economy class. Offering more space, primarily on long haul flights, premium economy offers an-in-between option for travelers who might not have first class or business class in their budget, but prefer more comfort than they would receive in economy class.

Premium economy was introduced by Virgin Atlantic Airways in the early 1990s as a more comfortable economy class experience, but without the exceptional personal space and amenities of business class.

What is premium economy class?

Premium economy is a class of service, primarily on longer-haul international flights. Premium economy is sometimes sold on long haul US domestic flights. Some airlines offer extra legroom economy seats, which may also come with additional benefits, but premium economy cabins are distinct from these.

American Airlines, for example, only offers amenity kits to premium economy passengers on long haul international flights, and not on its domestic flights where premium economy is sold as a distinct product.

How much are premium economy tickets?

Premium economy ticket pricing can vary based on the market, and the amount of difference in product between economy and premium economy.

A transatlantic premium economy fare can run between $2,000 and $3,500 roundtrip, while economy fares can start as low as $400 roundtrip for midweek dates during off-peak periods.

Domestically, the limited number of markets with actual premium economy fares for sale typically follow the same international fare conventions—a premium economy ticket will often be twice as much as a regular economy class ticket.

How to find premium economy tickets

Not all airlines have premium economy products. Airlines such as Aer Lingus, KLM, Qatar, Etihad, and Korean Air have elected not to install premium economy cabins onboard their aircraft serving intercontinental routes, although many of them will offer extra-space economy seats for a fee.

Similarly, premium economy is generally only outfitted on larger aircraft. Airlines operating medium-sized narrowbody equipment (e.g. Airbus A321 or Boeing 757) on long haul routes will generally not have premium economy available onboard.

Premium economy is also a product for leisure travelers (the vast majority of corporate travel policies allow for business class travel on long-haul flights). As such, demand will often peak during top dates for leisure travel—think Thanksgiving, Christmas, Spring Break, and most of the northern summer. To find lower priced premium economy fares, look away from these periods, and toward the middle of the week.

Another facet of leisure travel products is that they tend to book well in advance. Many premium economy cabins are booked far in advance of business class, which tends to sell last-minute. Many deeply discounted premium economy fares also required a substantial advance purchase—often up to 60 days prior to departure.

How to upgrade to premium economy class

With cash or points in advance

Many airlines market their premium economy cabins aggressively, offering upsells throughout the purchase process for economy class, and then again once the booking is completed. Delta is one airline that consistently offers cash or mileage upgrades in advance—passengers need only retrieve their reservation to see what’s available for their upcoming flights, bearing in mind the prices tend to fluctuate the same way fares do.

With cash or points during check-In

Another option for upgrades is during the check-in process. Many airlines will continue to sell premium cabin seats at a discount right up until departure time. During check-in, many airlines will offer paid upgrades with tiered pricing based on frequent flier status (upgrades are often cheaper for higher-tier members).

Some airlines, like Air France, even offer mixed currency purchases for upgrades during the check-in process. Passengers can pay entirely with points, entirely with cash, or use a sliding scale to pick a combination of the two.

The long haul flights that airlines typically offer premium economy cabins onboard are often carved out from frequent flier upgrades--that is, the automatic free upgrades many elite flyers receive to premium cabins on domestic flights don’t apply to many flights with premium economy cabins. However, some airlines, such as United, allow top-tier flyers to use upgrade credits or points (available only to elite flyers and distinct from redeemable miles) for seats in premium economy.

Many carriers also offer bids for premium economy upgrades within a few weeks of departure, similarly to how many airlines offer the same bid programs for business class. From about a week up to several weeks before the flight, airlines will email confirmed passengers with links to submit a bid (passengers in the know can often visit the airlines website to submit bids without being prompted by email).

Bids will be collected (with a minimum bid—no “The Price Is Right-style” $1 bid shenanigans here!) and winning bidders are notified by email. It’s important to check how much advance upgrades are going for when determining a bid, although it’s notable that many carriers who offer upgrade-by-bid programs tend not to sell upgrades as aggressively using other methods.

Premium economy vs other tickets

Premium economy quality can vary by carrier, but it generally sits between Economy and Business Class. On some super-discount carriers, premium economy is the only premium product onboard.

US-based airlines generally model their premium economy cabins on the domestic first class products – passengers can expect a wide, leather recliner and an upgrade meal served in a single course on a tray. Non-US carriers generally follow a similar model, but have more disparity between products.

What do premium economy tickets usually include?

At minimum, premium economy tickets promise a package of improvements over economy class—more than just extra legroom seats (which airlines often sell at a fee to economy class passengers).

While products vary, premium economy tickets generally include a bigger, wider seat with more recline and more legroom—often with a leg rest or foot rest installed. Entertainment screens will often be larger, and many airlines provide higher quality noise-cancelling headsets. Amenity kits are often upgraded over economy (or provided when none are offered in economy).

Meals are an area where there is inconsistency among carriers. Most airlines offer upgraded meals, often on china dishes with glassware to premium economy passengers, but there are exceptions.

It’s also worth noting that premium economy cabins are typically quite small, with only a few rows of seats. They’re often also partitioned from the economy section by a bulkhead and a curtain, providing premium economy passengers with a sense of exclusivity and privacy in a more intimate cabin, compared to the stadium feeling of many larger economy class sections.

More often than not, international business class will offer passengers a lie-flat seat. Along with lounge access and some differentiation in the onboard meal service, these are the primary differences between business class and premium economy class. There’s also the issue of personal space. Business class seating is standardizing around “aisle access” or no seat being between any seat and the aisle, while in premium economy it’s still common for a portion of the seats in the cabin not to have aisle access.

Premium economy is meant to look a bit more like economy class than like business class, but its passengers generally enjoy extras, like a better seat, and sometimes an upgraded meal. As international aircraft cabins have grown more cramped, and had amenities reduced, veteran fliers sometimes describe premium economy as “what international economy used to be like”.

Note that United, Delta, and American all operate aircraft configured with premium economy cabins on some domestic flights, but on most flights these seats are sold as part of the economy cabin, typically with as part of the extra legroom sections available for a fee or to elite frequent fliers.

Premium economy cabins and services change over time. Passengers can use websites like SeatGuru and SkyTrax to check out airline seating advice with seat maps, and read reviews and rankings of the world’s airlines, respectively.

Read more about flying in classes above economy:

Thank you! Your submission has been received!
Oops! Something went wrong while submitting the form.
Last Updated
December 13, 2021