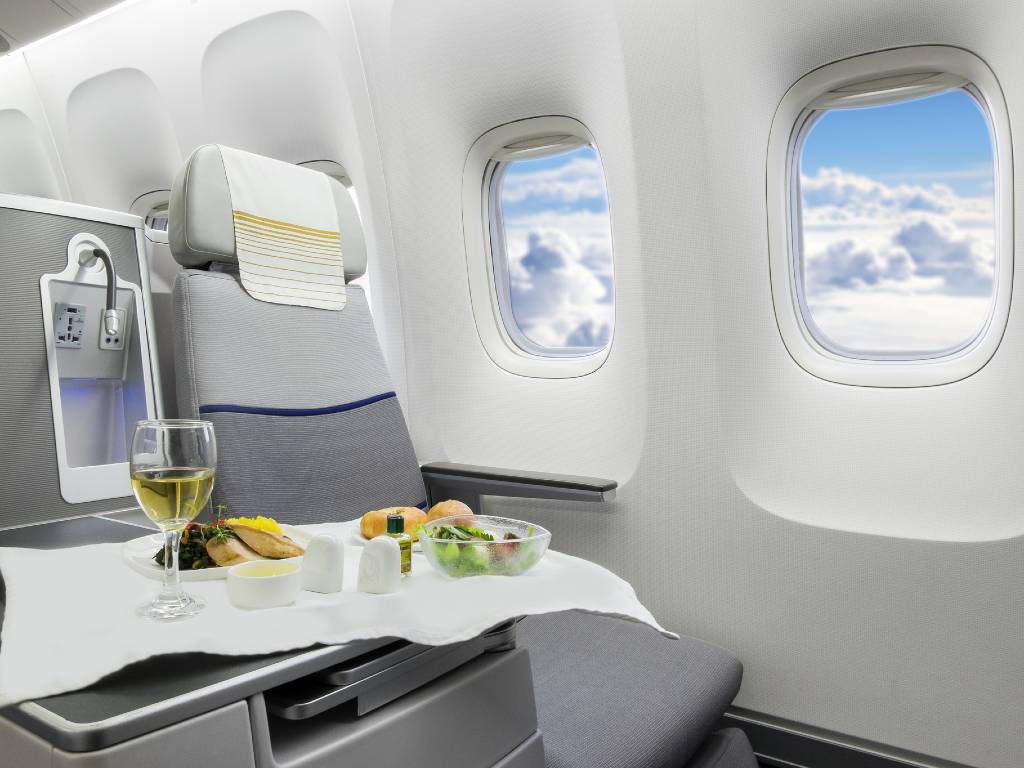 So you’ve found your destination and picked your airline (or at least whittled the list into a short one) and are comparing fares and itineraries. An offer might pop up at the time of booking, displaying fares for business class or first class on your chosen flights. But what’s the difference? Is it significant? Is it just a slightly bigger seat with more room, or are the differences substantial?

We hear stories about chauffeured limousines to planeside at the last minute and free-flowing champagne on tap, but which airlines do that, and for whom? And what’s the difference between international first class and domestic first class? Is it really worth paying more?

Read on—we’ve got tips. And if you want to save up to 90% on your next business or first class flight, join Scott's Cheap Flights.

For having the same name, domestic and international first class couldn't be more different, and if you're expecting a lie-flat seat and gourmet meals on your three-hour first class flight within the US, you're going to be disappointed.

The United States is one of the few countries where airlines generally market their domestic premium cabins as “first class”—in the rest of the world, it’s business class on most shorter flights. On most aircraft, US domestic first class means a wider reclining seat, upgraded (and free) meal service, and free alcoholic drinks, often served on basic china with glassware, compared to the plastic in use in economy (also referred to by airlines as the “main cabin”).

On most US domestic flights, first class is the only premium cabin onboard the aircraft. There are, however, a select number of routes that airlines treat differently—mostly coast-to-coast transcontinental flights (NYC to LA, for example). On those flights, the first class products are often similar to international markets. This is typically made clear during the booking flow on the website.

Confusingly, on many shorter international flights between the United States and Canada, Mexico, Central America, the Caribbean, and even the northernmost destinations in South America, the flights are operated with the same aircraft used for US domestic flights. On these flights, the domestic first class cabin is often sold as business class (but with a service standard roughly similar to domestic first class).

Most airlines flying international first class cabins today do a good job of elevating the first class experience enough to make it worth the increased fare over business class, but they’re careful not to make it too exclusive and expensive, otherwise they’ll start to lose customers to private jet travel.

Just before United Airlines phased out United Global First in favor of their new United Polaris business class, the primary differences were a slightly larger seat, different crockery and glassware, an extra soup course, and an additional choice of main course. Otherwise, their first and business class products were remarkably similar. That was an example of a product on the way towards retirement—most airlines that continue to operate separate first and business cabins to international markets have continued to maintain their distinctions from each other.

It’s also worth noting that availability of international first class is often limited to a smaller set of cities with significant demand—typically cities with concentrations in the entertainment, banking, energy, and tech industries, which have corporate travel policies that allow for first class travel.

The Pros and Cons of Flying Business Class

The Pros and Cons of Flying First Class

First and business class passengers generally have access to a lounge at most airports on their itinerary.

For example, at the Air France La Premiere lounge at Paris CDG, there’s a restaurant with table service, turning out dishes by Alain Ducasse, while the business class lounge offers a self-serve buffet and bar.

In some smaller cities without a lot of daily flights, the first class lounge could be as simple as a separate section of the business class lounge with upgraded food and amenities. At larger cities, first class passengers can use a dedicated first class lounge operated by the airline or one of its alliance partners. At Frankfurt, Lufthansa operates a dedicated First Class terminal with private security screening and private car transfers to departure gates.

While business class passengers are among the first to board the aircraft, they still generally queue up in the terminal.

First class passengers are typically escorted to the departure gate, often by a cart through the terminal, or by luxury sedan to planeside at some airports. First class passengers may also have a dedicated jet bridge to the aircraft, and may choose to board first or wait until the last minute.

With few exceptions, premium cabin seats come in three categories: recliner, lie-flat, or suite. There are subcategories within these, but these are the basics.

A recliner seat is like a living room recliner, with a wider seat and more legroom than economy plus often a foot rest. A lie-flat seat reclines to 180 degrees with lots of surrounding storage, and a suite is a lie-flat seat with privacy walls or curtains around it and sometimes even more space.

The suite is quickly becoming the standard in first and business class, and many airlines have suites in both classes. The difference between them is generally the amount of personal space. On some airlines, first class suites are simply souped-up versions of the business class seat with more room, but on other airlines, the suites may be remarkably different.

On Cathay Pacific, both first and business class passengers on the 777-300 have lie-flat seats, but the first class seat is longer and wider. They both have linens from the organic brand Bamford, but in first the thread count is higher, there’s a selection of pillow types, and they’re prepared with a “calming pillow mist.”

Conversely, there are some airlines that still have older versions of first class products onboard, including first- or second-generation recliner seats in a 2-2 configuration, where window seats do not have direct aisle access. These layouts are becoming exceptionally rare, but it’s always a good idea to check the website or consult SeatGuru for the detailed seat information and seat map for the aircraft type planned to operate the flight prior to booking to avoid the shock of not having expectations met onboard.

On some airlines, there’s not a huge difference between the meal service in first and business classes. On other airlines, the difference can be significant. Because even business class cabins can have a substantial number of passengers to be fed at one time, service flow will generally look more similar to economy class: flight attendants dispense beverages and pre-plated meals on trays from carts in the aisle at a predetermined service time. Most airlines will serve business class passengers a set tray with an appetizer and salad, and then return with another cart to offer main courses.

In first class, meals are often plated onboard, and served upon request, rather than at a set time. It’s also more common for tables to be set and plates presented individually rather than all together on a set tray.

Food is also top quality in first class. Many airlines, including Lufthansa, Emirates, Etihad, Cathay Pacific, and Singapore Airlines serve caviar with traditional garnishes and pour top Champagnes such as Dom Perignon, Bollinger, Krug, and Laurent Perrier. For breakfast, many airlines will cook eggs to order in first class (Cathay Pacific has a purpose-built frying pan in first class galleys).

Some airlines also offer the ability to pre-order specific entrees. While the service is typically offered to both business and first class passengers, the selection in first class is often more extensive.

It’s typical for airlines to differentiate their amenity kits substantially between the first and business class cabins. On SWISS, the first class amenity kits contain products from the Swiss luxury spa brand La Prairie, while the amenity kits in business are designed by Victorinox and contain more basic products. On Air France, business class kits contain Clarins products, while in first class they’re packed full of amenities from Carita. On British Airways, it’s The White Company in business, and Elemis in first.

In addition to the amenity kits, which typically contain personal care items, many airlines offer pajamas to passengers in both first and business class on long haul overnight flights. Supply and selection of sizes are often limited, and first class passengers have first selection.

Some airlines have installed standup bars onboard, but they’re available for both first and business class passengers.

Emirates is a standout, offering onboard shower suites to first class passengers onboard their A380 aircraft. The suites can be reserved for 30 minutes (water flow lasts only five minutes but the remaining time is clearly indicated) and come with Bvlgari bath amenities.

Outside of set meal and beverage times, business class passengers are generally left to their own devices. On long haul flights, many airlines that don’t have a staffed standup bar onboard will have a self-serve bar with drinks and snacks available.

Some airlines will offer more substantial hot snacks that can be ordered from flight attendants at any time during the flight. This is sometimes offered in business class, but is far more standard in first class.

Airlines That Have Both First and Business Class on International Flights

Which One Should You Choose? Business Class vs First Class

As with most travel products, the final decision really comes down to value. Travelers who have the money to spend and are looking for an exceptional travel experience would likely find booking a first class ticket worthwhile; travelers who want a comfortable flight but aren’t taken in by all the trappings of a first class ticket might find business class to be a better value.

For example, a traveler wanting to maximize sleep time on a seven-hour overnight flight between New York and Paris might prefer to have a quick bite in the lounge and then sleep the entire flight, so the onboard service differences between business and first might be irrelevant (provided the traveler doesn’t need the extra space of a first class bed to sleep well). However, on the nearly 13 hour nonstop from New York to Dubai, the extra space and amenities might easily be put to good use, in addition to a solid night’s sleep.

The bottom line: If you’re looking for the ultimate travel memory and have the cash to splash, first class delivers an outstanding experience. But if you’re coming from economy, business class will likely offer enough additional comfort and service to feel like a luxury.

Whatever cabin one does choose in the end, it pretty much goes without saying that a journey in international first or business class will likely prove to be memorable—for all the right reasons.

Thank you! Your submission has been received!
Oops! Something went wrong while submitting the form.
Last Updated
November 15, 2021