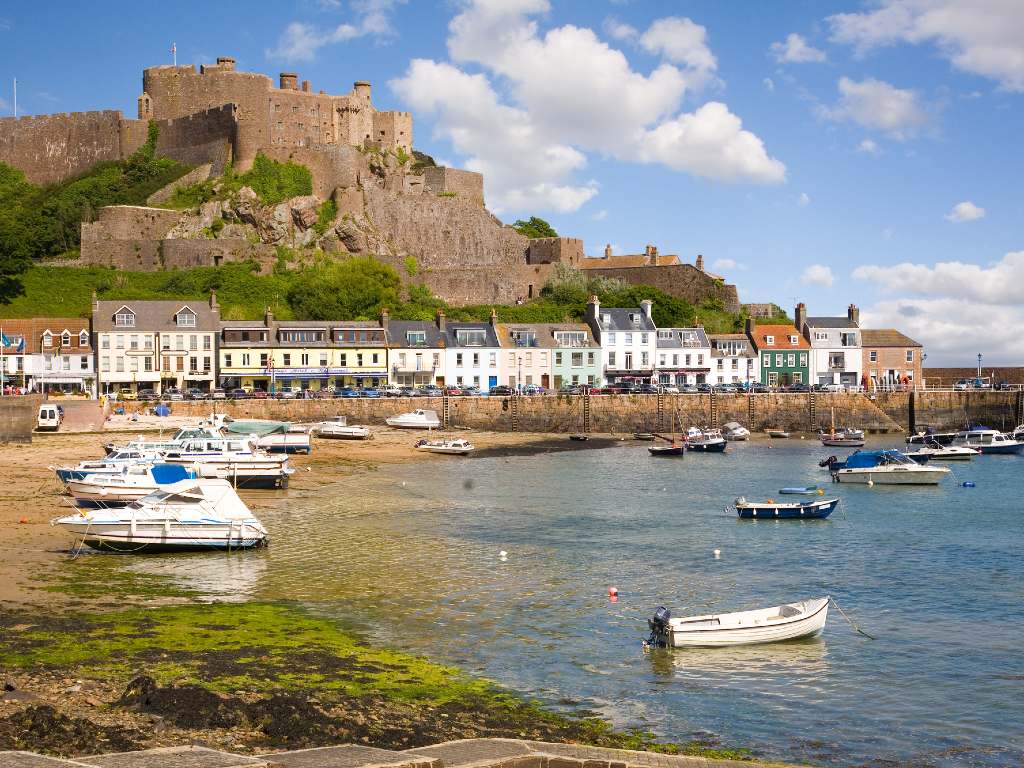 Look at most maps of the world and you’d be forgiven for missing the Channel Islands. But zoom in on the English Channel between the south coast of England and the north coast of France. Here, you’ll see the specs of land that make up this unique Anglo-French archipelago of golden sand and shingle beaches, granite sea cliffs, and lush rural interiors.

The Channel Islands are Crown Dependencies, which means the Queen of England is their monarch, but they are not part of the United Kingdom. And while they are collectively referred to as the Channel Islands, the five main islands—and several uninhabited islands—are divided into two jurisdictions, each with their own government, laws, taxes, and mints.

The Bailiwick of Jersey governs the largest island, Jersey, which is just 9x5 miles. The Bailiwick of Guernsey encompasses Guernsey and the smaller islands (in size order) Alderney, Sark, and Herm, along with two private islands that are not open to the public.

Fortified against the French

The Channel Islands were part of the Duchy of Normandy until 1204. When they gave allegiance to King John of England, many of the historic defenses still found on the island were built to ward off French invasion.

On Jersey, 800-year-old Mont Orgueil Castle is one of the finest examples of a Medieval stronghold in the whole of Europe. From the binoculars on the granite turrets, you can see people sunbathing 14 miles away on the Normandy beaches.

At around the same time, Castle Cornet was built on a tidal island on Guernsey (it is now accessible by a causeway) and some 350 years later in the mid-1500s, Elizabeth Castle was built on a tidal island in Jersey, which can now be reached at high tide by an amphibious vehicle. King Charles II took refuge here during the English Civil War in the 1640s. Visit any of these majestic granite strongholds and you feel history close enough to touch. In summer, you may chance upon re-enactments, including the firing of the “Noon-day Gun” from Castle Cornet and Elizabeth Castle.

Jersey and Guernsey were both important makers and exporters of cider from the 17th to 19th centuries, when up to a quarter of the islands were covered in orchards and horse-drawn stone cider presses were a feature of most farmyards.

As beer gained popularity, cider production declined, but is now being revived. La Robeline in Jersey produces an award-winning traditional cidre bouche in the Normandy style, where a second fermentation in the bottle produces the fizz. And Roquette Cider in Guernsey produces a more modern, carbonated cider that’s equally delicious. You can walk through the neat orchards at Roquette, which puts you in the rural heart of Guernsey. Look up the valley from their tasting room and you won’t see another building—just grass and apple trees as far as the eye can see.

The islands of Jersey, Guernsey, and Sark each have their own dialects of Norman French, which are considered severely endangered, with most of the population now speaking English as their first language.

In Jersey, a young group of musicians and songwriters have attempted to revive Jèrriais, which is now only spoken by a few hundred people. They play and record traditional songs in the language, which are then taught and sung in schools to encourage early learning among primary-aged children. Kit Ashton, one of the founding members of the band the Badlebeques, who sing in Jèrriais, has written an article that outlines the project.

You won’t find a gas station on the smaller islands of Sark and Herm. That’s because they have never had cars on them. Life continues much as it has for hundreds of years with locals going about their business on foot or by bicycle.

The only motorized vehicles are tractors that fill up from diesel canisters transported from Guernsey. The tractors on Sark pull a trailer “bus” of passengers up the steep hill from the harbor and also pull a trailer fire engine and ambulance.

The Channel Islands rose up out of the ocean five million years ago, and there is evidence of inhabitants from as long back as 280,000 years.

Early in 2021, archeologists discovered that teeth found in a cave in Jersey contained DNA of both Neanderthal and Homo sapiens, perhaps proof that the two species’ interbred. Alongside this Paleolithic evidence in the islands, there are also many Neolithic remains from about  4,500 BCE.

The most important of these is La Hougue Bie in Jersey, an impeccably preserved passage grave that is thought to be among the oldest buildings in the world. There are other dolmens and passage graves in both Jersey and Guernsey left by pagan ancestors. Unlike other important sites of this age, the ones in the Channel Islands are really easy to access and there is never a crowd, so you can sit in quiet contemplation and ponder the weight of history.

The Channel Islands were the only British soil captured by the Germans in the Second World War. The Nazis occupied the islands for just under five years. Evidence of this time can be seen in the concrete fortifications, bunkers, and watchtowers found along the coastlines of Jersey, Guernsey, and Alderney, which are part of Hitler’s Atlantic Wall.

Nearly all residents on Alderney were evacuated before the arrival of the Germans and the island became a concentration camp for European prisoners of war. In Jersey, discover what life was like for the locals and soldiers in the award-winning War Tunnels, while in Guernsey, visit the German Occupation Museum. You might get the shivers as you learn of 9 p.m. curfews, radios being confiscated, and the living conditions of the forced labor that was used to build the fortifications.

The book the Guernsey Literary and Potato Peel Pie Society, which was made into a major movie starring Tom Courtenay, dramatizes life during this period.

Tiny populations and even tinier prisons

Sark has a population of just under 500 people, while Herm has just 65. And with everyone knowing each other, crime is at a minimum. People leave their doors unlocked in Sark and even leave the keys in the ignition of their cars in Alderney (after all, if you were to steal a car you can’t go far on an island that’s three square miles).

Because of the low crime rate, Herm has perhaps the smallest prison in the world—just a single cell—while Sark has two cells.

But beware of the strange laws. In Jersey it’s illegal for men to knit in July and August, and in Guernsey, it is illegal for men to knit in daylight hours. The laws date back to the 17th century when the wool trade was booming in the islands and apparently, men enjoyed helping with the knitting of Jersey and Guernsey jumpers so much they needed to be forced back to their farming and fishing duties.

Life on the water

The five main islands share nearly 120 miles of coastline between them, which can be explored by kayak, stand-up paddleboard, or RIB trips known as seafaris, that get you close to smugglers caves in the cliffs and the birdlife that nests at the waterside, such as puffins, oystercatchers, and guillemots. Nothing beats that feeling of the wind in your hair, the salt on your lips, and the sun bouncing off the water to warm your face.

Surfing, kite-surfing, and coasteering are all popular sports on the larger islands. Off the coast of Herm is a colony of Atlantic seals that you can watch basking on the rocks, while off the coast of Alderney, 2% of the northern gannet population nests on a few sea rocks. Dolphins are also often spotted in the waters between Guernsey, Sark, and Herm.

Jersey is well known for its Jersey Royal new potato; a sweet, nutty “early” potato that finds its way onto the menus of the finest restaurants in London and beyond. It is also home of the doe-eyed brown Jersey cow that produces golden milk, high in fat content that in turn makes wonderfully creamy butter and ice cream. Guernsey has its own “Guernsey” cow, which produces an equally yellow butter and is also home to distinctive Golden Guernsey goats.

The cuisine is derived from the peasant food of northern France, with Jersey’s most well-known traditional dish being bean crock—a stew of beans and pigs’ trotters that resembles the Normandy cassoulet. Guernsey has a very similar dish, known as bean jar. As for sweet treats, Jersey has fried twisted donuts called wonders, while Guernsey has a fruit loaf known as gâche.

“I dreamed a dream in times gone by”

Victor Hugo is to the French what Shakespeare is to the British, and the famous author of Les Miserables has connections to both Jersey and Guernsey where he spent time after he was exiled from France. Hugo made Guernsey home for 15 years and he decorated Hauteville House in a truly extraordinary way, with each room a cacophony of styles, textures, and colors. It’s like an interior design poem.

On Guernsey, you can also visit a new Victor Hugo Garden in Candie Gardens, which showcases some of Hugo’s favorite plants, and those named after his friends, such as the Alexandre Dumas rose.

A meal for a tenner

To get the locals eating out in the autumn when the bulk of the tourists have headed home, an innovative restaurant festival called the Tennerfest was born. Now in its 24th year, restaurants across the islands sign up to take part and offer fixed-price “Tennerfest” menus at their restaurants.

Originally these were £10 each, but these days they can be more than £20 for a set menu at a fine-dining restaurant. In 2021, the festival runs for six weeks from October 1 through November 11.

Getting there: Cheap Flights occasionally finds flights to Jersey in the $400s and $500s roundtrip. One-hour nonstop flights from London to Jersey or Guernsey typically start around $40 each way. There’s also a ferry that reaches the islands in about four hours.

Join Scott's Cheap Flights to get notified of incredibly cheap tickets to destinations around the world.

Thank you! Your submission has been received!
Oops! Something went wrong while submitting the form.
Last Updated
October 27, 2021 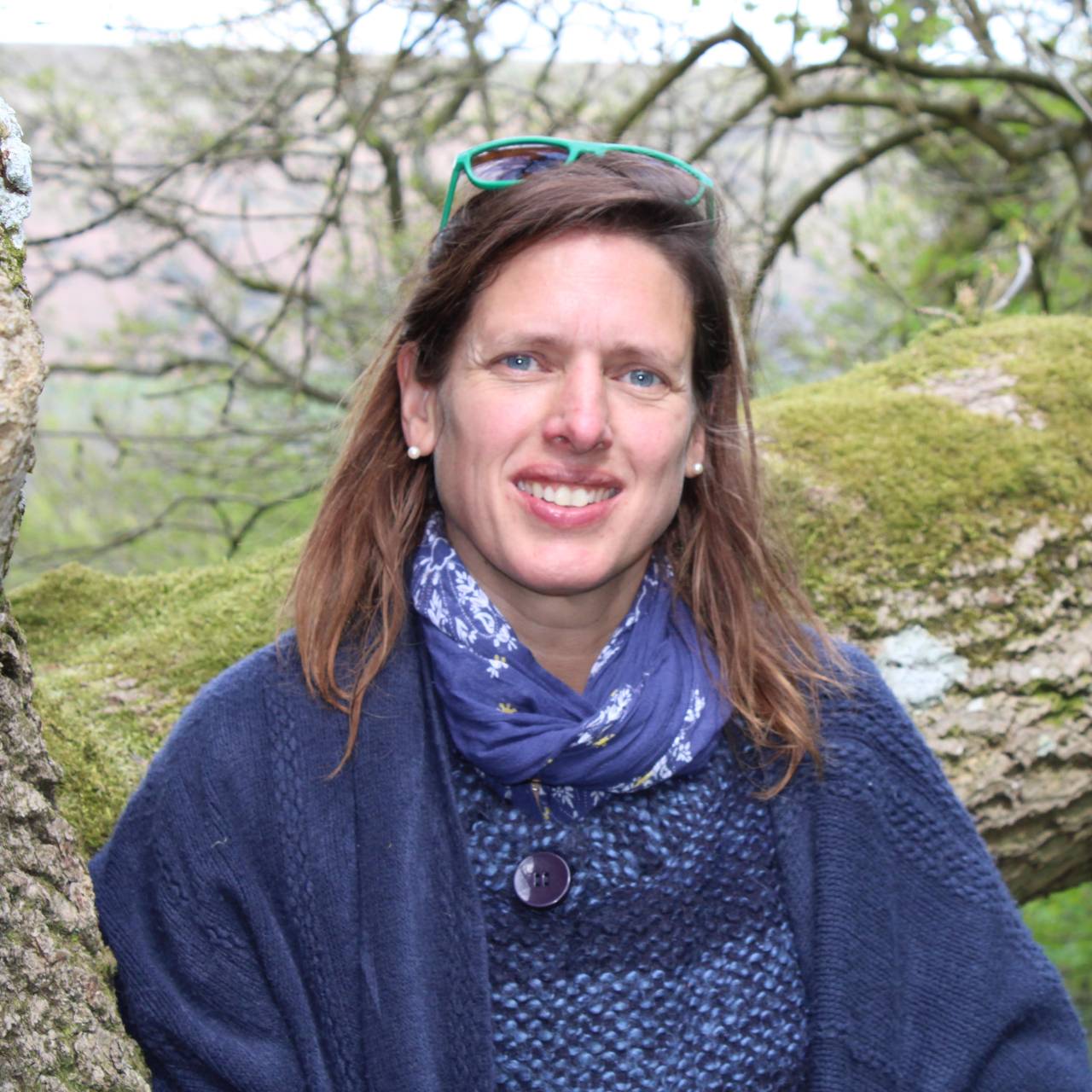 Antonia was born in Jersey and is the UK Telegraph’s Channel Island destination expert. She has also written about the islands for a host of other publications including the Financial Times, Country Life, Family Traveller Magazine, the Guardian, Conde Nast Traveller, and the Times.