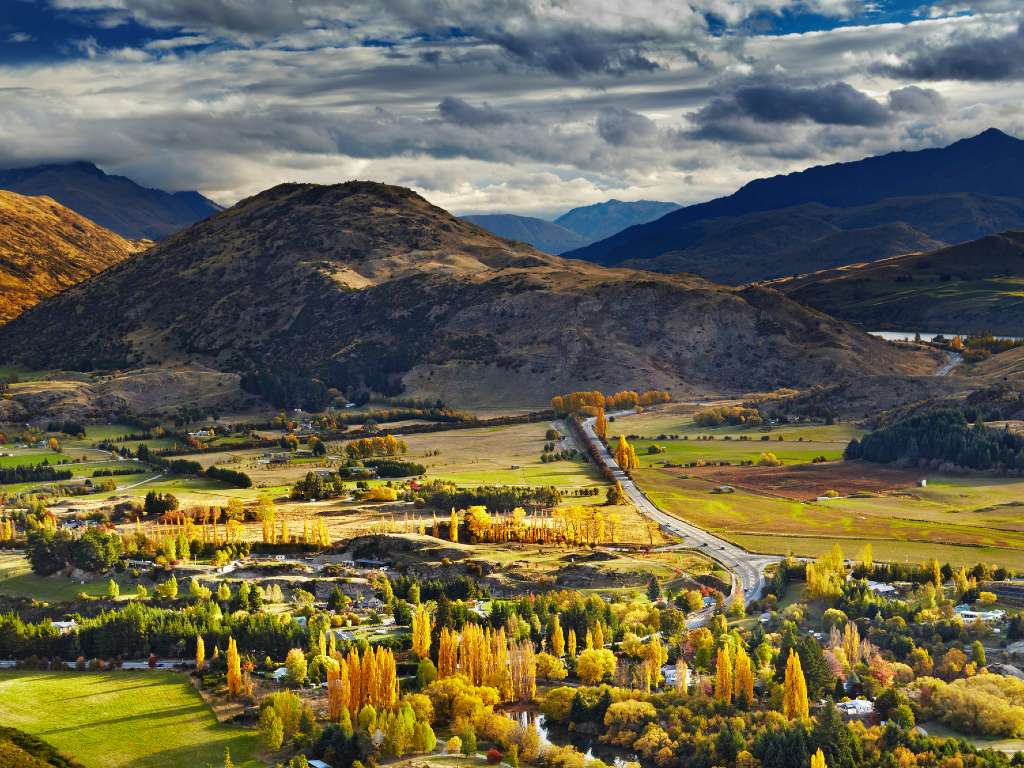 Tucked into the heart of New Zealand’s rugged South Island between the cities of Dunedin and Queenstown, Central Otago is a quiet region that packs a punch. Lovingly nicknamed “Central” by locals, it’s a place with big open skies, cerulean blue alpine rivers, purple mountain ranges, and sloping valleys that smell of wild herbs.

Home to the iconic Southern Alps and stunning Otago coastline, the region has  four distinct seasons (albeit reversed from the Northern Hemisphere) of autumn in April and spring in October, plus cold winters and hot, dry summers.

New Zealand’s indigenous people, the Māori, arrived in Central Otago more than 700 years ago, passing through the region on their way to the West Coast looking for pounamu (greenstone). Along the way, they hunted moa, a giant flightless bird that’s now extinct, and as they did, they would burn paths through the forest and vegetation. As a result, the region’s wide uninterrupted plains have an almost lunar appearance with few trees in sight.

It’s barren and wild—beautiful in a rugged way. Though it’s sparsely populated, there are lots of charming towns worth a visit, from the historic gold mining town of Alexandra to the stone fruit capital of Cromwell. Familiar to most Kiwis but largely undiscovered by overseas visitors, with its history, incredible landscape, beautiful views, and farm-to-table food scene, Central has it all.

Central Otago is unlike many of the other regions in New Zealand owing to its arid landscape and dryness. Boiling in summer and frosty in winter, the unique landscape allows for the incredible growth of fruits and herbs, including cherries, apricots, and plums.

Come springtime, the sunbaked lands around Central bloom with wild thyme, turning everything fragrant and bright purple. Legend has it that thyme was first introduced to Central Otago by Jean Desire Feraud, a French gold miner who planted it around his garden near Clyde. It slowly spread across the empty landscape and now blooms beautifully in spring and summer, making walks and tramps through the countryside super pleasant as each step releases the scent of wild thyme.

The landscapes of Middle Earth

The Lord of the Rings trilogy was filmed on location around New Zealand, and many of the fictional places in the series, such as the Westfold of Rohan, are actually located in the heart of Central Otago.

The stunning blue Kawarau River appears in the films as the River Anduin (though you might not recognize it without the computer generated Pillars of the Kings standing on either side) and Skippers Canyon showed up on screen during the memorable scene when Arwen calls the flood to wash away a horde of Ringwraiths chasing her.

Poolburn Dam, an artificially dammed lake in the Raggedy Ranges, was another popular filming location for the fictional land of Rohan in the films, and it’s one of Central’s greatest secrets, hidden away down long dirt roads. Built during the Great Depression to increase employment, it’s mostly used in summer for fishing and getting away to one of the many “cribs” around the lake—a South Island New Zealand word for a very rustic holiday cottage (think: no power, no reception, and outdoor toilets).

Inspiration for poets and painters

For a look at Central on the page, pick up The Vineyards of Central Otago by Viv Milsom, which explores the area’s wine industry; Graeme Sydney’s Central Otago, a beautiful pictorial look at the region; or Elemental, a collection of Brian Turner’s poems about and inspired by the land.

Lots of sheep…not a lot of people

Not long after the gold rush of Central Otago in the 1860s, 20% of the entire New Zealand population lived in the area. Nowadays it’s dropped to less than 5%.

While more people are escaping the hustle and bustle of big city life to retire and relax in the peace and tranquility of the region, the wildness of Central Otago still feels like an escape. Otago comprises an area of roughly 12,000 square miles and is home to about 230,000 people; for comparison, that’s about 75% of the size of the Netherlands, but with less than 1% of its population.

Central Otago has an ideal climate for growing fruit. Many of New Zealand’s best stone fruits are grown here, such as plums, peaches, and nectarines, and the landscape is covered in orchards and vineyards.

Hearty home cooking defines the Central plate, and there are plenty of cellar doors, gastro pubs, good old fashioned pubs, and iconic restaurants worth traveling for. From springtime cherries to spiced honey and homemade cheese, Central is a food-lover’s paradise.

With many high country sheep stations and a strong farming background in the area, it’s easy to understand why lamb is also often on the menu. Roasted lamb shoulder with spices and a glass of local pinot noir makes for the classic meal of Central.

Vineyards at the end of the world

One of the world’s southernmost growing wine regions, Central Otago is also the highest, driest, hottest, and coldest wine-growing region on the planet—and it is world-famous for its legendary pinot noir.

While the first vines were planted in 1864, winemaking didn’t take off here until the mid-90s. Now there are more than 100 wineries in the region, including the newly opened Cloudy Bay Shed, Akarua, Mt. Difficulty, Two Paddocks, and Felton Road. Many of these labels are available all over the world if you find yourself thirsty for some authentic Kiwi red wine. Other varietals produced include chardonnay, sauvignon blanc, riesling, pinot gris, and gewürztraminer.

The colors of autumn

The seasons turn differently in New Zealand. Peak summer is in January—when the days are long and hot and locals head to nearby lakes to cool off—but by April the days have shortened. The air turns crisp as autumn makes its presence known.

It all begins with the wine harvests around Central, with all hands on deck as everyone works together on the small vineyards to reap the year’s harvest and begin winemaking. Then the orchard trees begin to change color, with the wide-open landscapes turning into seas of gold and red.

Autumn is the best time to experience the wonder of Central Otago and Clyde and Cromwell are two of the most stunning towns for an autumn visit. Surrounded by tall lush poplar trees that turn vibrant yellow, as well as vineyards as far as the eye can see, the landscape here truly transforms once the cold air arrives.

A land of gold, literally

In the 1860s, a gold rush brought tens of thousands of searching souls to Otago hoping to make their fortune in the region.

After the gold was gone, Central Otago was left with many relics from the Gold Rush days: visible sluicings in the sides of the hills around Bannockburn, gold works in St. Bathans, mine shafts in the Bendigo Historic Reserve, and the remains of abandoned villages around the Bendigo Mine Loop, one of the awesome day walks in the area.

Central Otago has over 185 miles of bike trails in the region, from trails connecting the wineries to dozens of mountain biking tracks for all abilities.

The Central Otago Rail Trail was built on top of the old rail tracks through the region and traverses across and through some of the old railroad bridges and tunnels. The trail, which covers 93 miles (150km), was launched in 2000 to bring life back into the quiet hills and plains of Central Otago and now is one of the best ways to take in the area’s tiny towns.

The trail passes through barren landscapes, by stunning historic farmsteads, and over river gorges, historic bridges, and viaducts as it traverses the heart of Central Otago. The ride itself isn’t too challenging, and can be done any time of year, and there are operators who handle the logistics (like transferring luggage between stops).

>> Planning a visit? Here's what you need to know about getting a New Zealand visa. 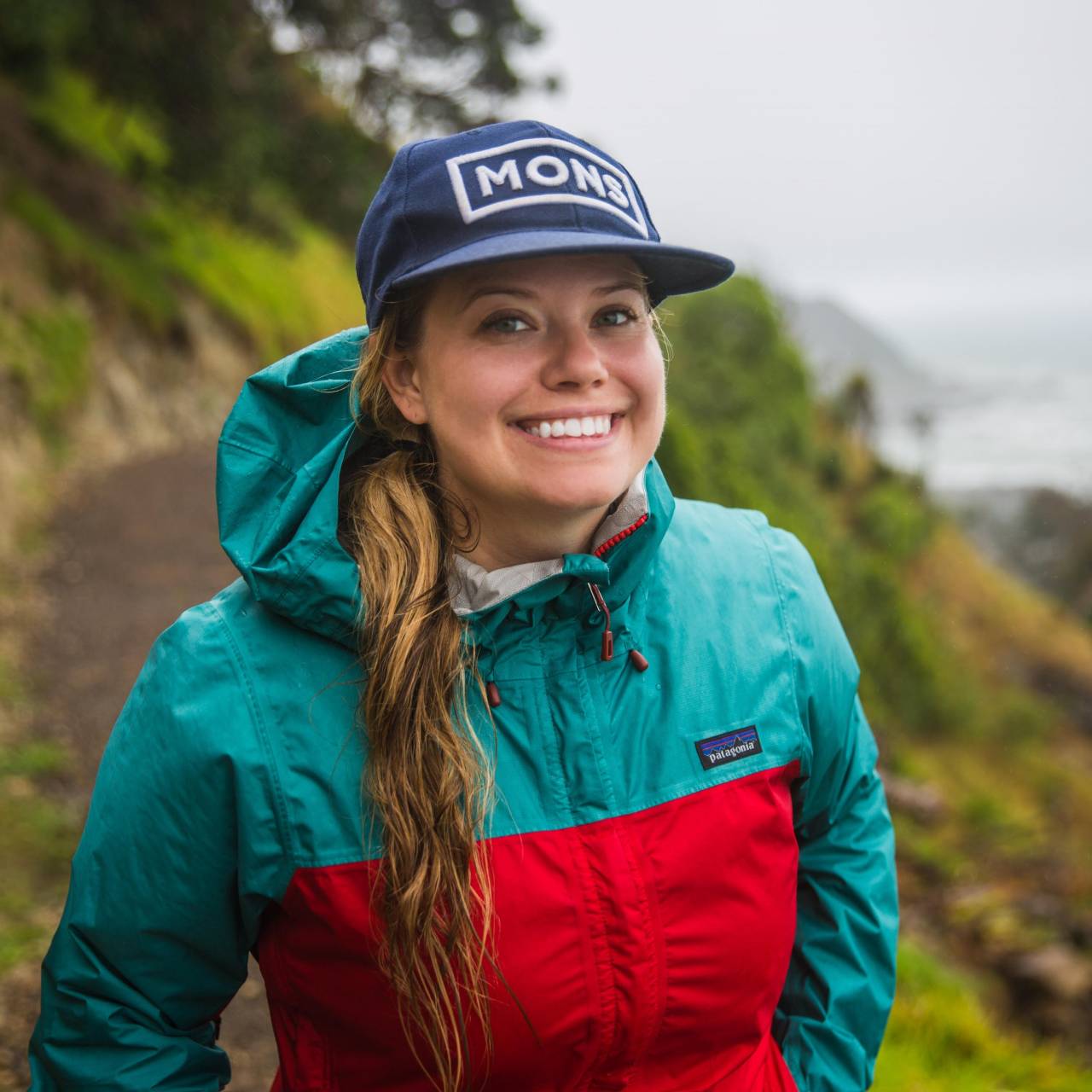 Liz is the creator behind the Young Adventuress travel blog. Based in New Zealand’s South Island, she’s always on an adventure hiking in the mountains and looking for a good story, and nowhere else in the world draws her in more than Central Otago, a land of big landscapes and bold pinot noir.