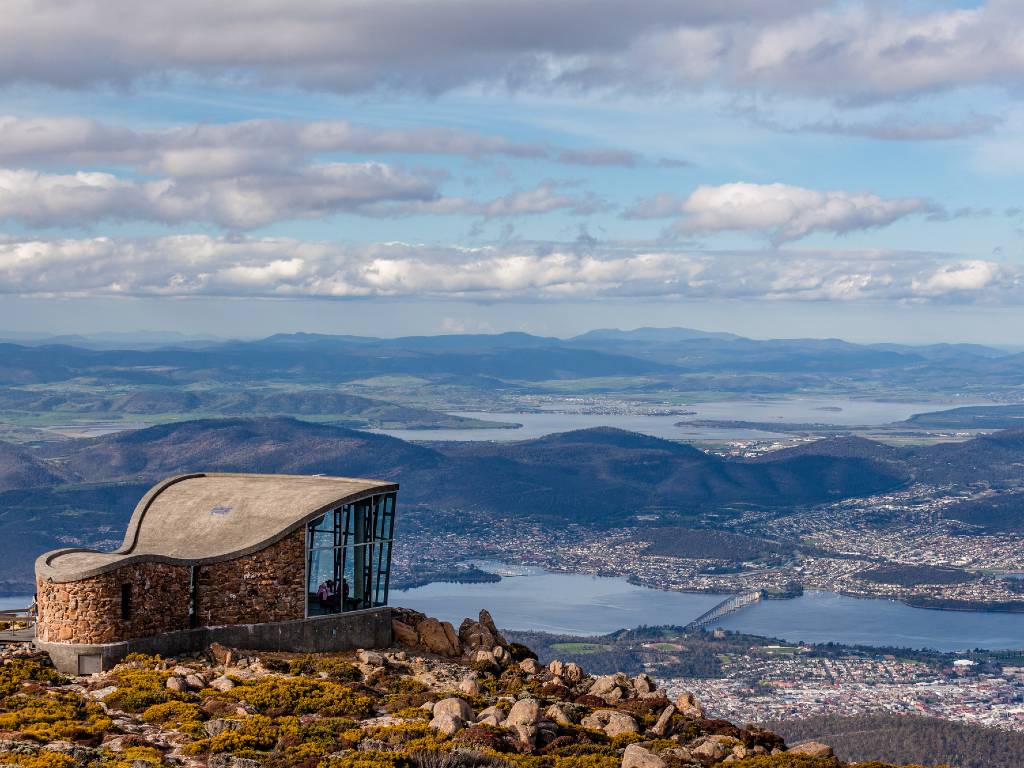 An island off an island

To some, it might be the edge of the map, but to others, the island of Tasmania, about 150 miles off the southeast coast of Australia, is one of the most beautiful and inspiring places on earth.

Tasmania is roughly the same size as the state of West Virginia, but it’s been left untouched—over 20% of the entire state is protected as part of UNESCO’s Tasmanian Wilderness World Heritage Area and just over 40% of the entire island is a national park or reserve.

Most visitors arrive via the capital, Hobart, a charming historic town along the Derwent River. It’s worth a few days of exploration—you’ll find great museums, the gorgeous Mount Wellington, and the well-loved Salamanca Market, held every Saturday. From there, Tasmania is your oyster, with wilderness, national parks, and forests ready to be discovered. One of the best things about Tassie is its rugged landscape, so lace up your hiking shoes and prepare to be amazed.

Tragically, European arrival to Tasmania, or lutruwita, which is the Indigenous name for the island, decimated much of this culture through genocide, with Indigenous Tasmanian descendants still fighting for reparations. In 2008, the Tasmanian government approved a $5 million AUD fund for children from the stolen generation, a national government program that ran from 1910-1970 and led to Indigenous children being taken away from their families. The original Tasmanian Aboriginal language, palawa kani, no longer has any living speakers. However, the palawa kani Program, through the Tasmanian Aboriginal Center, is working to retrieve and recover palawai kani through surviving audio recordings.

While Dutch explorers were the first to arrive in the 1640s, it wasn’t until 1803 that the first permanent settlement was established when Tasmania became a British penal colony known as Van Diemen's Land. It’s believed that more than 70,000 convicts were sent there in the 19th century, with the remote and isolated island reserved for only the worst offenders. In 1901, Tasmania officially became part of the emerging Australian federation and an Australian state, with Hobart as its capital.

Indigenous Tasmanians are proud of their heritage and one of the best ways to learn more is by supporting Indigenous-owned tourism businesses like the wukalina Walk, a guided walking and cultural experience through the Bay of Fires. Hobart’s Tasmanian Museum and Art Gallery also has a permanent exhibition, ningina tunapri, that celebrates Aboriginal culture on the island. More and more government recognition is also being given to Indigenous place names and there are now 28 landmarks and places in Tasmania that are officially acknowledged by both their palawa kani and English name.

To truly experience Tasmania, you need to take a hike—literally! Tassie is known for its natural beauty, best explored via one of the state’s multi-day walks. Visitors will find over 1,700 miles of walking trails and more than 880 unique walks across the island. Arguably, Tasmania has the best selection of bushwalks, or hikes, within Australia. Adventures such as the epic 6-8 day South Coast Track and the shorter four-day Three Capes Track, which opened in 2015, are the best ways to immerse yourself in nature.

Pristine beaches, jagged cliffs, and unique flora await, from the soaring King's Holly tree to the tiniest fungi and mosses. However, don’t set off without training and the right gear, as these hikes are no walk in the park. Some hikes offer accommodation huts that intrepid hikers need to pre-book, while others require you to be self-sufficient.

If you’re looking for something a bit less intense, you can find plenty of easy day walks across Tasmania as well. There’s even a short hike up the 4,000-foot Mt. Wellington, overlooking Hobart, that can be done in about 1.5-2 hours.

Tasmania might already be an island off an island, but Bruny Island, off the Tassie coast, is worth the extra detour. Departing from Kettering, about a 40-minute drive south of Hobart, Bruny Island is only a 20-minute ferry ride away, making for an easy day trip.

While you’re there, you’ll stumble across delicious produce such as apples, honey, and cheese, plus a plethora of wildlife, including fur seals, albatross, rare white wallabies, and echidnas.

Be sure to visit the Neck, an isthmus of land that connects North and South Bruny Islands and one of the best places to take photos on the island. Bring your sneakers though—it’s 279 steps to the top. At the lookout point, be sure to visit the monument to Truganini, a 19th-century Aboriginal woman who worked to unite Indigenous Australians.

The devil is in the details

Tasmania’s best-known animal has to be the Tasmanian devil. Bearing only a passing resemblance to the cartoon character of the same name, these voracious scavengers are unlike anything else. Tassie devils store fat in their tails, their newborn joeys are about the size of a raison, and once grown they can devour carrion in minutes—bones, hair, and all.

While there’s no doubt that these carnivorous marsupials are fierce, they are also at risk. Tasmania is the only place where these animals are found in the wild, but the species is listed as endangered, in part due to an infectious facial cancer that has decimated wild population numbers and has no known cure.

As a tourist, you can help by driving slowly at night, when devils are likely to be crossing the road, and support local conservation efforts.

Tasmanian whisky is here to stay. Ever since Sullivan’s Cove distillery took home the title of “World’s Best Single Malt” at the World Whiskies Awards in 2014 for their French Oak Cask, Tasmanian whisky has been on the world’s stage. However, whisky isn’t new to the island, as the first legal distillery was started back in 1822. Thanks to a temperature climate, pristine spring water, and plenty of locally-grown barley, Tasmania is ideal for whisky production.

Sullivan’s Cove remains the only Australian whisky to take home this coveted award, and extremely small production numbers mean their whiskies are quickly snapped up and become collector’s items.

Luckily, they’re not the only game in town. Sample local favorites such as Lark and McHenry—with over 30 active distilleries to try, you won’t go thirsty in Tasmania.

Art unlike anywhere else

Many visitors to Tasmania don’t initially realize that it’s a world-class art destination, but the 2011 opening of MONA (Museum of Old and New Art), changed everything. Owned by eclectic professional gambler David Walsh, MONA is unlike any other art museum—it used to contain a controversial, darkened ‘Death Room’, but you’ll still find plenty of thought-provoking art installations, including a famous wall of vagina sculptures.

The museum is also behind Tasmania’s yearly ‘Dark Mofo’ festival, held each June in celebration of the winter solstice, complete with a unique effigy each year, such as 2018’s giant Tasmanian cave spider, and a nude ocean swim.

If local handicrafts float your boat, time your visit to coincide with the Tasmanian Craft Fair, held in the scenic town of Deloraine in late October each year. You’ll find delights including watercolors, sculptures, and jewelry, plus plenty of opportunities to meet the artists.

Tasmania is Australia’s largest producer of seafood, with the state known for its incredibly fresh delights, particularly salmon. However, the industry is being impacted by climate change, with rising ocean temperatures impacting the health and growth of salmon.

If you want to enjoy delicious but sustainable seafood in Tasmania, it helps to consult GoodFish, a sustainability initiative by the Australian Marine Conservation Society, designed to help consumers learn more about where their seafood is coming from.

You want to feel good about the choices you make when buying seafood, whether in a restaurant or at a local market. Can’t wait to sample some amazing seafood? If so, check out Seafood Everyday, a cookbook by local Tassie chef Eloise Emmett.

If you’re going to visit Tassie, you need to get wild! Some of the most gorgeous parts of the state are national parks or protected reserves—in fact, a little over 40% of it. Many visitors to Tasmania rent their own car or hire a campervan, as it’s the easiest way to explore every nook and cranny that the island has to offer.

A few national parks that should be high on your list include Cradle Mountain–Lake St Clair, Mount Field, and Tasman. Cradle Mountain is one of the island’s most iconic vistas–a winter visit gives you gorgeous, snow-covered peaks, while spring brings an abundance of bright wildflowers in bloom. For visitors short on time, a day spent in Mount Field offers majestic waterfalls and eucalyptus forests, accessible via short walks. Or, plan an adventure to Tasman National Park, delivering epic, jagged cliffs, and the well-known Tasman Arch rock formation.

Many parks are quite remote, with limited facilities. You’ll also need to leave your furry friend at home, as dogs (other than service animals) generally aren’t permitted in Australian state and national parks.

The ancient rainforests of Tasmania are truly special —they’re documented as some of the world’s oldest and largest trees in the world, including eucalypts dated as far back as 20 million years and the world’s tallest flowering trees. Many forests on the island are also home to important Aboriginal rock art, notably found near the beaches of Preminghana.  They also provide habitats for endangered species of flora and fauna such as the swift parrot, spotted handfish, and many types of native ferns.

Sadly, the forests of Tasmania have been the cause of a decades-long battle between loggers, politicians, and conservationists, with companies eager to cut down and log these huge trees for profit. Large swaths of old-growth forest have been lost as a result. As a visitor to Tasmania, be sure to visit some of the national parks to learn more about the local ecosystem, but always leave no trace, ensuring everything you bring into the park leaves with you.

Your cup runneth over at Wineglass Bay, one of the most picturesque places on the island—if not the world. This pristine inlet, part of Freycinet National Park, regularly finds itself on the world’s best beaches lists for its pink granite cliffs, unbelievable water clarity, and perfectly formed horseshoe bay.

However, the key is to time your visit on a sunny day. Without the sparkle from the sun, the turquoise waters of the beach don’t stand out and you’re not going to get those glowing, clear photos. Tassie’s weather is notoriously unpredictable, so if you see a break in the clouds, go for it!

Thank you! Your submission has been received!
Oops! Something went wrong while submitting the form.
Last Updated
January 5, 2022 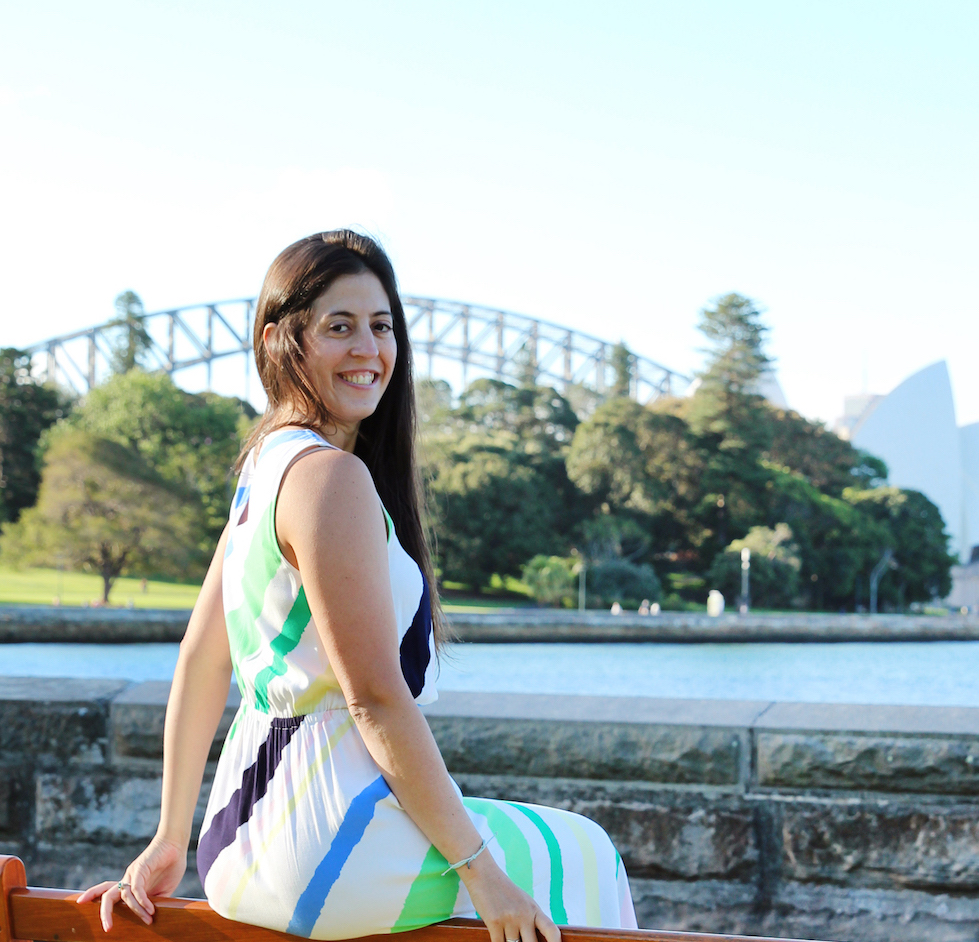 Katie is a freelance writer based in Sydney. Originally from the US, she’s called Australia home since 2012 and loves hiking and exploring one of her favorite parts of the country, Tasmania. Follow her adventures on www.theaccidentalaustralian.com or @theaccidentalaustralian on Instagram.