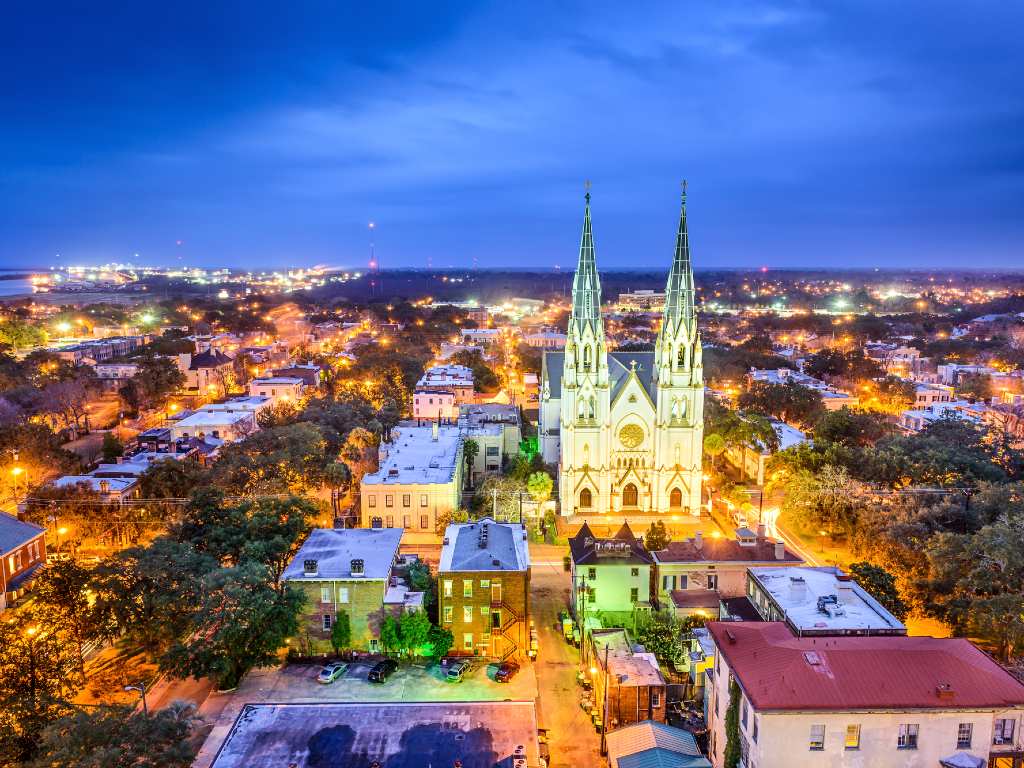 Savannah was the first planned city in the United States. Today it’s still filled with some of the best examples of 18th- and 19th-century architecture in the country, and the city’s blocks are lined with some of the oldest, most unique buildings in the nation, blending Federal, Gothic Revival, Georgian, and modern architecture. Over 40% of Savannah’s buildings are historically significant, and the city itself is one of the largest historic preservation areas in the country.

There are 22 large public squares spread out over the historic downtown core. Each is filled with miniature gardens of flora and fauna and oak trees that tower over the cobblestone streets. Many trees are covered in creeping Spanish Moss, but this name is misleading—it’s neither Spanish nor moss. Savannah’s signature plant is actually a close cousin of the pineapple. Just don’t try to eat it.

Another plant that rules the squares is the resurrection fern. While most plants can’t live without water, the resurrection fern will last up to 100 years without it. Its fronds curl up to survive, but when it rains, the green plant blooms out, expanding to cover the trees around it.

From slavery to civil rights

Black heritage is an important part of Savannah’s history, and much of it can be explored around the city. First stop is the Ralph Mark Gilbert Civil Rights Museum, the official civil rights museum of the state, which chronicles the movement from slavery to the present over three floors. Notable exhibits include the work of the NAACP and an interactive map of significant civil rights sites around the city.

The Owens Thomas House and Slave Quarters, a Regency-style mansion, offers a look at the lives of the enslaved people who lived and worked there—and the family who enslaved them. (The house is part of the Telfair Museum, home to an impressive collection of contemporary art.)

The city is also home to the oldest Black church—the First African Baptist Church—in North America. Founded in 1777, it was an important part of the Underground Railroad, and was also the headquarters for Rev. Dr. Ralph Mark Gilbert, the leader of Savannah’s civil rights movement.

We’ve got spirits, yes we do

Many of the city’s street strollers aren’t from this realm—the American Institute of Paranormal Psychology actually dubbed Savannah the most haunted city in the country. It seems every local has a tale of oddities or hauntings and ghosts are in abundant supply, probably thanks to the many Civil War battles and yellow fever epidemics that ravaged the city.

One of the city’s best craft breweries—the Moon River Brewery on Bay Street—is backed by some haunted figures. Staff and patrons swear that ghostly figures will brush up on billiards players or toss bottles off tables. While the ghosts who haunt the main floor brewery are cheeky in nature, the top floor of the building—the most haunted spot in the place—once served as a hospital during yellow fever.

Hostess with the mostess

Savannah earned the nickname Hostess City for its reputation of generous hospitality. Even today, strolling down the streets, locals are happy to chat you up or wave a greeting.

Another of the city’s nicknames? Slowvannah, as time seems to move at a different gait here. Long chats with shopkeepers are the norm—as is taking an extended lunch to escape the afternoon heat.

The boozy punch with presidential approval

Back in Prohibition days, Savannah was the unofficial capital for rum-running; Al Capone set up a garage in the city where he outfitted cars with fake engines full of rum and sent them across America. While the city is not short of drinking options today, many of the best bars, like Alleycat Lounge and Mata Hari, are still speakeasy-themed. The city is even home to the country’s only Prohibition Museum, where visitors can learn about the infamous gangsters, rumrunners, and clandestine cocktail bars of the 1920s and 30s.

One of the city’s most famous drinks is the Chatham Artillery Punch. Supposedly invented in the 1700s by a regiment of Savannah soldiers, the crowd-pleasing punch calls for a bold blend of Cognac, whiskey, rum, Champagne, lemon and sugar. Many say it was the preferred sip of George Washington when he came to visit the city.

Low Country boils—seafood roasts stacked high with corn, peel-and-eat shrimp, sausage, and potatoes—are a staple in Savannah. Come spring and fall, locals head out of the city to oyster roasts. Here, community members gather as barrels of oysters are boiled and piled mountain-high onto tables. Often, the oysters are pulled from just off the banks of the nearby beaches. Folks stand around tables, shuck, sip, chat, and listen to local bands.

Hosting an impromptu oyster roast at home is easy. Roast the mollusks in the oven in the shell, and lay out hot sauce, sliced lemons, saltines, shucking knives, and seafood forks for everyone. Let everyone shuck their own and garnish with whatever toppings they prefer.

Another local favorite is Country Captain’s Chicken: a spicy, curried whole chicken traditionally flavored with ingredients, like curry powder and ground nutmeg, from the spice trading ships docked in the Savannah harbor. The Grey’s Chef Mashama Bailey discusses the history of the dish on the new season of Chef’s Table. Don’t watch it hungry.

Savannah is one of the gateways to the Sea Islands, home to Gullah Geechee culture. Gullah Geechee are the descendents of enslaved West Africans who worked cotton, rice, and indigo plantations over the Georgia coast for two centuries before being emancipated and settling communities on the islands.

Their remote location and isolation was an incubator to a vibrant, unique culture, complete with rich cuisines and its own language. Explore it through traditional artisan works, like quilts and woven grass blankets, and dishes like gumbos and crab soup. Hungry? Gullah Gourmet ships ingredient packs across the country, or test out a recipe for Gullah rice.

Just ring the bell if you’re not actually dead

Savannah is home to some of the most historic graveyards in the country, from Laurel Grove to Bonaventure Cemetery. Many are scenic, blanketing the river and draped in Spanish Moss. Famous figures like songwriter Johnny Mercer and Girl Scouts founder Juliette Gordon Low, along with a range of others, are buried among the live oaks.

Aside from notable folks, the graveyards are home to many victims of the Civil War and yellow fever outbreaks. When winds blow, listen for the sound of bells—during the yellow fever, many victims would slip into a coma when ill. Doctors at the time thought they were dead, so they would cart the patients off to the graveyard. Being buried alive became a common fear, so bodies would be laid to rest with a bell on their grave, connected to their finger with a string. If the person turned out to be not quite dead, their movement would ring the bell.

Centered in the city is the Savannah College of Art and Design (SCAD), the country’s largest art school. The school has an extensive program dedicated to rehabilitating historic buildings, and many of the city’s most notable monuments can be attributed to the school’s preservation work. For example, the school restored an18th-century convent and the African American baptist church and then returned it to the congregation.

The school also has an impressive art museum, home to the largest collection of African art in the country and works from Salvador Dali, Annie Leibovitz, Willem de Kooning, and Pablo Picasso. The school’s online boutique peddles jewelry, prints, sculptures and more made by alumni, students, and professors.

Luck of the Irish

Some of the first settlers in the city were Irish (many came over to the new colony in 1734), which is why today, the streets are dotted with charming pubs seemingly lifted right from Dublin.

Every year, Savannah is home to one of the largest St. Patrick’s Day parades in the country. The fountains across the city’s 22 squares are dyed a neon green hue in celebration.

A pirate’s life for me

Savannah has a long history as a port town, thanks to its location at the mouth of the Savannah River.

On the shore as you enter the first city is The Pirate’s House, the oldest building in the entire state, dating back to 1754. You can dig into seaman fare here, as many sailors have over the centuries, but one of the big draws is the first edition version of Treasure Island by Robert Louis Stevenson on display.

In the restaurant’s early days, it was a raucous pirate bar—there are hidden tunnels that run from the port to the basement rum cellar where all sorts of unsavory characters could float in and out without being spotted on the streets.

You may recognize much of Savannah’s scenery from films, like Forrest Gump. Although the movie was set in Alabama, downtown’s Chippewa Square is where Forrest spoke his famous “life is like a box of chocolates” line. Today, the bench can be found in the city’s visitors center. Movie buffs can even pick up food from Debi’s Restaurant—the dinner where Jenny worked—on the other side of the square.

Outside Mr. Hanks, it’s common to see stars strolling the streets of Savannah. It’s a versatile location to shoot in: the city has beaches, wetlands, cityscape, and Antebellum architecture plucked out of another era. Plus, the state offers generous tax credits for filmmakers. Action flicks like X-Men, period pieces like Galveston, and films like Peanut Butter Falcon, CBGB, and Baywatch were all filmed here, as well as Savannah’s most famous film, Midnight in the Garden of Good and Evil (the house is now a museum, open for visits).

Join Scott's Cheap Flights and save up to 90% on flights to Savannah and around the world. 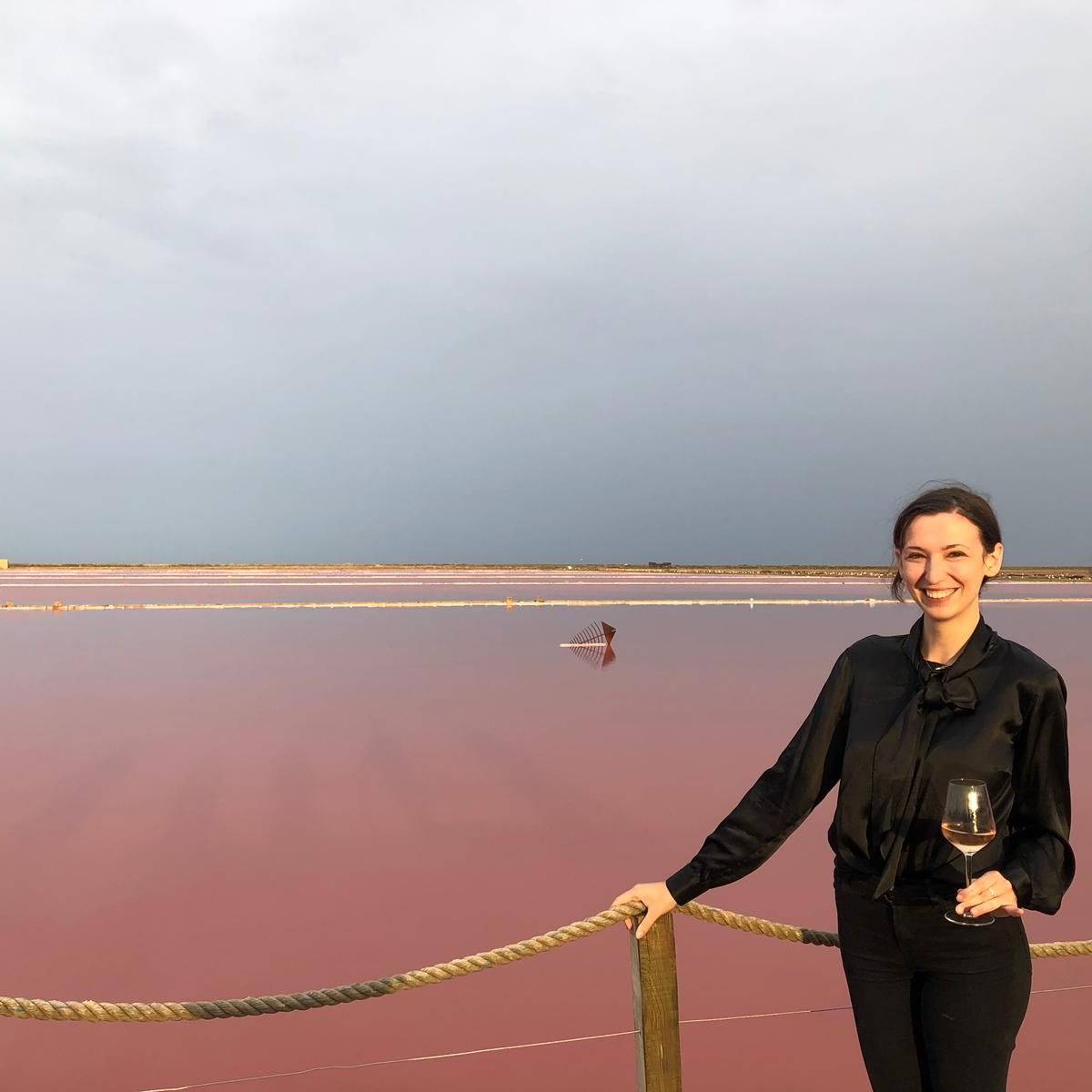 Kate is a freelance writer who moved to Savannah for school and fell under the city’s spell. Now, find her eating copious amounts of pralines, most likely in one of the city’s squares. She writes for MAXIM, Wine Enthusiast, Forbes, Eater, Elle, and The Spruce.