Cheap Flights to Florida | From $61 Roundtrip 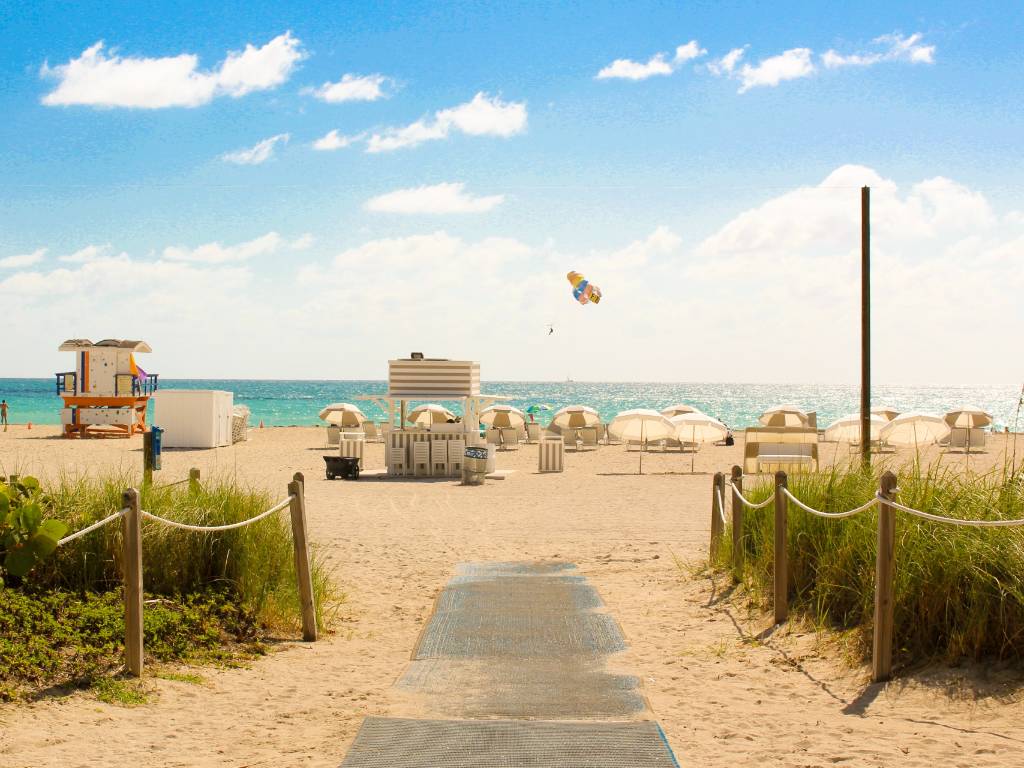 Florida certainly lives up to its “Sunshine State” nickname. There’s its reputation as a haven for snowbirds and raucous spring break parties, as well as the miles upon miles of gorgeous beaches that draw visitors from all over the globe.

But Florida is more than just sun and sand. There are unique historic sites, famous theme parks, Latin flavors, distinctive art and architecture, and more than a million protected acres of wetlands. To say there’s something for everyone in Florida is an understatement.

While the abbreviation for Orlando International Airport (MCO) references the airport’s old name, because Orlando is home to Walt Disney World it’s often said to stand for “Mickey’s Corporate Office.” The airport is less than 20 miles from the famous theme park.

It’s under 14 miles from downtown Orlando, though traffic can mean the trip takes up to an hour. Although Orlando isn’t a coastal city, it’s the most popular tourist destination in Florida—because of theme parks like Walt Disney World, Universal Studios, and SeaWorld—and MCO is Florida’s busiest airport.

>> Read our travel guide to Orlando

It’s about eight miles from downtown Miami, which sits near Florida’s southeastern tip. Many of Miami’s main attractions are technically in neighboring Miami Beach (think Art Deco architecture, flashy night clubs, and sunny beaches), but the whole Miami metro area boasts a vibrant mix of Latin cultures that permeates much of local life.

The main airport in this area is in Tampa, but St. Pete–Clearwater International Airport (PIE) is served by a few low-cost airlines. It’s a hub for Allegiant Air, with seasonal service on Sun Country Airlines (from Minneapolis/St. Paul) and Swoop (from two airports in Canada).

The airport is nine miles from St. Petersburg, seven miles from Clearwater, and 17 miles from Tampa. Clearwater itself is on the western side of Florida, on the Gulf of Mexico, and borders Tampa Bay to the south. The 20-plus miles of beautiful beaches between St. Pete and Clearwater are well-loved by visitors and locals alike.

Destin–Fort Walton Beach Airport (VPS) is located on Florida’s Panhandle, about 9 miles from Fort Walton Beach and 16 miles from Destin. The airport is closest to the city of Valparaiso. It’s a relatively small airport with year-round service from Allegiant Air (for which it’s a hub), American Airlines, American Eagle, Delta Air Lines, Southwest Airlines, and United Express. All but Allegiant and Delta also have seasonal flights into Destin. Destin, on what’s known as Florida’s “Emerald Coast,” is famous for its white sand beaches and emerald-green waters.

Tampa International Airport (TPA) is the largest airport serving the Tampa Bay metro area and one of the biggest in Florida. More than 20 major airlines serve Tampa, though it’s only a hub for regional airline Silver Airways and a focus city for Breeze Airways and Frontier Airlines. Some of the other airlines serving Tampa are Alaska Airlines, American Airlines, British Airways, Delta Air Lines, JetBlue, Southwest Airlines, Spirit Airlines, and United Airlines.The airport is about six miles from downtown Tampa.

The city itself is on the western coast of Florida, on the Gulf of Mexico and it also sits on Tampa Bay. It’s a major port city for both cruise and cargo ships, and one of its main tourist attractions is Busch Gardens—part theme park and part zoo.

Fort Lauderdale-Hollywood International Airport (FLL) is often considered a secondary airport to Miami International Airport (MIA), since the former is just a bit over 20 miles from Miami. While Miami is served by a longer list of major airlines, FLL has more flights on budget airlines—Fort Lauderdale is, for instance, the airport with the most Southwest Airlines flights in South Florida. It’s a hub for regional airline Silver Airways and a focus city for Allegiant Air, JetBlue, and Spirit Airlines.

Like much of the surrounding area, Fort Lauderdale is a popular tourist destination because of its beaches and waterfront. It’s been known as a raucous party town for spring breakers for decades, though more recently Fort Lauderdale caters more to upscale seasonal and long-stay visitors with a growing arts scene, fine dining, boutique shopping, and yachting events.

The largest and busiest airports in Florida are in Orlando, Miami, Fort Lauderdale, and Tampa, with the airports of Fort Myers, West Palm Beach, and Jacksonville categorized as medium hubs. The major airlines serving each are listed below, and airlines using that airport as a hub or focus city are listed in italics.

How long is the flight to Florida?

Flying to Florida from NYC

Flights from the New York area to Florida usually fall between 3-5 hours, depending on which New York airport you depart from and where in Florida you’re landing.

Flying to Florida from California

Flights from California to Florida vary in length depending on where you’re flying from in California and where you’re landing in Florida, though you can expect flight times in the 4-5 hour range.

Flying to Florida from Dallas

Flights from Dallas/Fort Worth International Airport (DFW) to Florida are typically about 2-3 hours.

Flying to Florida from Chicago

Flights from O’Hare International Airport (ORD) to Florida are usually about 3-4 hours.

How to get cheap flights to Florida

If you live in a place with multiple major airports that are relatively easy to reach by car, you increase the chances of finding a cheap flight. Portland residents, for instance, can look at flights from Seattle’s airport, while people in Milwaukee can browse the options from Chicago.

Look at smaller airports near your destination.

Florida has multiple major airports with service from dozens of airlines, but sometimes it’s the second-tier airport in the area that has a greater concentration of flights on budget airlines. When traveling to Miami, for example, it’s a good idea to check flights into Fort Lauderdale, too.

We all know how common it is for airlines to sell a bargain ticket and then charge for every little thing once we’re on the plane. Checking a bag for free is almost unheard of on domestic flights in economy class, so it’s always best to travel with carry-on sized luggage. This, too, may come with a fee if you’re flying on a low-cost carrier, but even that’s cheaper than checking a bag on the same flight.

Book your tickets 1-3 months ahead of your trip.

With domestic flights, we recommend booking flights about 1-3 months before a trip to get the best fares. The math is different if your dates aren’t flexible, or if you’re traveling during Florida’s high seasons, when you’ll be better off booking further in advance. If you don’t have a choice and must book closer to your travel dates, just keep in mind that airfare tends to jump at the 21-day, 14-day, and 7-day points.

Florida’s peak tourist seasons last from December all the way through April, thanks to a combination of snowbirds escaping the winter further north and spring break revelers, and high season means high prices. If saving money on your trip is your primary goal, look at the off-season calendar.

Airfare searches turn up so many options these days it’s easy to forget that there’s a major airline that you never see. Southwest Airlines, which serves many Florida airports and is even a hub at some, does not provide its ticket information to any OTA, which means you’ve got to go directly to the Southwest website to compare their ticket prices to the others you’re finding.

Use the best airfare search sites.

We have some favorite OTAs we rely on, and two in particular that we recommend—Google Flights and Momondo. Google Flights gives you the option to select multiple departure and arrival airports, which makes comparing ticket prices much easier. And a quick search on Momondo helps you confirm that you’re getting the lowest fare available.

Whatever site you prefer, you’ll save yourself a lot of time if you set an airfare price alert for the itinerary you’re hoping to book. You’ll get an email when the price changes, minimizing the amount of attention you need to pay to airfare, and if you set the alert far enough in advance you’ll be confident in what the price of a ticket usually is and what constitutes a great deal. If your travel dates are flexible, though, you will need to set multiple fare alerts.

Even if cost is your main concern, it’s not a bad idea to look at the price of fares above basic economy. With tickets above the basic economy level, many airlines allow changes free of charge. In other words, if you book a ticket and later find the same route for a lower price, you can book the cheaper flight and cancel your original ticket. You’ll usually get a voucher for the amount of the original ticket rather than money back, so just be sure you’ll have a chance to use the voucher before it expires.

Bonus: Become a member of Scott’s Cheap Flights. Membership means letting us comb for airfare deals every day—deals that we send directly to your email inbox so you can monitor price fluctuations for tickets to Florida. Then, when you’re ready to book, you can do so confidently.

Join Scott's Cheap Flights to get deals like these to Florida and spots around the world.

Thank you! Your submission has been received!
Oops! Something went wrong while submitting the form.
Last Updated
December 13, 2021