Sedona: The US Desert City Surrounded by Ancient Red Rocks 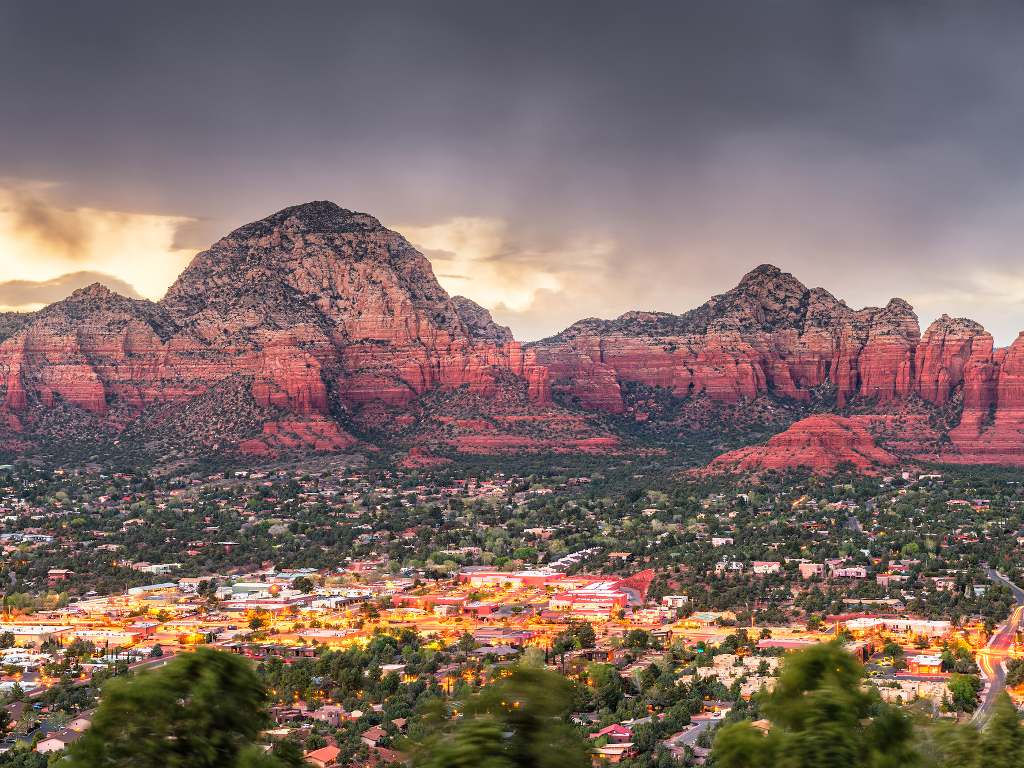 Arizona’s rust-colored small town of Sedona is a popular destination for long-weekenders, hiking enthusiasts, spiritualists, luxe-lifestylers needing to unwind, and simply anyone who wants to experience America’s most majestic landscapes at their very best.

With hundreds of hiking trails through spectacular red rock formations, both traditional and off-beat relaxation treatments and fun activities for all ages, Sedona is a highly sought-after vacation spot. Celebrities like Oprah Winfrey, Kristen Bell and Dax Shephard, and even Walt Disney and Lucille Ball have spent time here. The beauty of the region made it a perfect filming destination for movies such as The Quick and the Dead and National Lampoon’s Vacation, as it is highly accessible for a range of budgets.

Sedona is also well-positioned geographically, a two-hour drive north of sprawling metropolis and major airline hub Phoenix. It makes a great getaway on its own, but it’s also just a two-hour drive to the Grand Canyon or three hours to the many wonders of Navajo Nation.

Many centuries, many lives

The Verde Valley is the 1,200 square mile region of Arizona where Sedona and neighboring towns now stand and may have been linked to early Aztec or Mayan occupation thousands of years ago. However, the earliest native artifacts—such as pottery and weavings—found in the area date back to as early as the 7th century.

Between the 12th and 15th centuries, Indigenous people constructed complex cliff houses. Sedona’s Palatki Heritage Site (which also contains fascinating pictographs) and nearby Montezuma Castle are two examples of this construction that you can visit today. In the 16th century, the Spanish called the local Indigenous people Sinagua, which means without water. It’s thought they could have been early ancestors of Arizona tribes including Hopi, Navajo, and Yavapai.

In 1899, Maryland native Theodore Carlton “T.C.” Schnebly headed west from Missouri for Flagstaff to join his brother, Ellsworth Schnebly. Along with other European-descended pioneer families, they began blasting irrigation routes and installing pipelines. They constructed a road and set up a guesthouse and post office amongst the beautiful red rock formations.

Soon after establishing himself, T.C. Schnebly called for his wife and two children to join him. Schnebly was unsuccessful in early attempts to name his new town, with the Postmaster General denying Schnebly Station and Oak Creek Crossing. In 1902, a name was finally approved: the first name of his beloved wife, Sedona.

Welcome to the vortex

Locals have long known that “God created the Grand Canyon, but he lives in Sedona,” a quote of unknown origin, but attributed to Indigenous people of the region. There is something intangible and mystical about the energy pervading Sedona, and it contributes to many people’s head-over-heels, lifelong love affair with the area. Many of the hippie-hearted who flock to this region claim this vibration emits directly from Sedona’s multiple energy vortexes.

While the entire region is considered an energy vortex, Bell Rock, Boynton Canyon, Cathedral Rock, and Airport Mesa are known as the four prominent and specific vortex centers. They are accessible by hiking trails of various degrees of difficulty—you’ll know you’ve arrived by the abundance of folks in yoga poses, meditating, or simply standing around with eyes closed and arms outstretched. Myth touts that the vortexes offer their visitors increased health and clarity. For a more hands-on experience with the vortexes, local guides offer private guided hikes or on-location yoga sessions to curious visitors.

If your vibe attracts your tribe, it’s no wonder that Sedona is a magnet for New Age practitioners. You’ll find multiple crystal shops and tarot card readers, but there are more unique options that may be worth a try.

Sound bathing or sound healing is one of many ways to ease anxiety, heal trauma, and connect with yourself. It’s commonly offered in some of the more mystical local spas in conjunction with traditional massage, reiki, or meditation, in private or group sessions. The guides create healing tones with crystal singing bowls and gongs, then allow the sounds to reverberate throughout the atmosphere and “bathe” the participants.

Say a little prayer for you…

The Chapel of the Holy Cross is an architectural wonder, spectacular vista, and Roman Catholic church rolled into one.

Hungarian sculptor Marguerite Brunswig Staude originally sought to build an Empire State Building-inspired steel-framed chapel in her native Budapest during the 1940s, but the outbreak of World War II canceled those plans. Post-war, Staude searched the globe for a new location, stumbled into the energy of Cathedral Rock Vortex and felt a pull to build in this spot in the federally protected Coconino National Forest. With assistance from then-Senator Barry Goldwater, Staude and partner architects, August K. Stotz and Richard Hein, received approval to commence construction in 1955. The chapel opened the next year.

A long concrete path with 360-degree views, including Bell Rock and Courthouse Butte, lead you up an incline to where the chapel juts from the earth. Inside is a collection of art and a magnificent, concrete crucifix that rises along the glass-paneled rear wall. The crucifix was created under Staude’s instruction by San Francisco sculptor Keith Moore and only updated in 2018 with the addition of a 33-foot tall bronze sculpture of Jesus by local sculptor, James Muir. The Chapel of the Holy Cross was added to the U.S. National Register of Historic Places in 2011.

Take a hike, or two

You don’t have to be on a spiritual quest to appreciate Sedona. Spending time in the spectacular scenery is more than enough reason to pay a visit, and scheduling several hikes is the best way to immerse yourself in the rusty landscape. Sedona is home to over 200 different hiking trails covering over 400 square miles, both within city limits and the immediate surrounds, so there are plenty of options at all skill levels to choose from.

One popular hike—or rather, scramble—is Cathedral Rock. You will head up, up, up for just over an hour until its summit: a vortex. While technically “moderate” and not advisable for hikers with small children or physical limitations, it includes the challenge of finessing yourself through a gully midway. From atop Cathedral Rock, the large rusty rock formations jutting into the sky are visible from every direction. Time it correctly to catch an unforgettable sunset.

The weather is generally mild in Sedona (though temperatures drop severely at night and it can be quite hot in midday in summer), so hiking is a year-round activity. A solid pair of sneakers, a big bottle of water, sunscreen, and comfy clothes that you don’t mind getting a little dusty are packing list absolutes. The regional Red Rock Pass or national America the Beautiful Pass will grant you parking and access to hundreds of trails.

Other popular routes include the hikes to Devil’s Bridge, Birthing Cave, and Fay Canyon.

Sightseeing and stargazing in Flagstaff

Flagstaff is about an hour’s drive north from Sedona and makes an excellent add-on or pit stop en route to further adventure.

Flagstaff sprang up in the 1870s along historic Route 66 and developed around lumber, sheep ranching, and saloon life. Now it’s considered an integral gateway to seven national parks and monuments, including Sedona’s home, Coconino National Forest, as well as the Grand Canyon and Petrified Forest national parks.

Check into the Weatherford Hotel, which officially opened in 1900 and has since hosted guests including William Randolph Hearst, Teddy Roosevelt, and Wyatt Earp. The hotel has live music performances, a restaurant and bar, and is situated among the boutiques and restaurants that have sprung up over the past century. John W. Weatherford’s other key contribution to Flagstaff, the century-old Orpheum Theater, is a major venue that now hosts popular musicians and comedians.

Flagstaff was named the world’s first International Dark Sky City in 2001, and it’s a great place for stargazing. Set above downtown Flagstaff, Lowell Observatory is one of America’s longest-running (since 1894), premiere observatories. Lowell is where Pluto was discovered in 1930 and is a Registered National Historic Landmark by the National Park Service. Today, visitors can attend family-friendly guest lectures or peek into the cosmos through one of several on-site telescopes.

Eat: Picazzo’s Healthy Italian Kitchen offers incredibly tasty, health-conscious dining in the heart of Sedona with a wide range of tasty options for all diets, including fantastic vegetarian and vegan options. The menu is loaded with fun, hearty takes on nutritious superfoods including quinoa and kale. They have both indoor dining or a patio option, the latter of which has a cozy fireplace and scenic views.

Whether you eat there or not, check out the significantly less healthy, but far more novel turquoise McDonald’s, the only McDonald’s in the world with golden arches painted turquoise, installed to comply with Sedona’s unique color-specific building codes.

Sleep: Accommodation in Sedona tends to skew on the higher end, with some of the most budget-friendly options being home rentals found in the surrounding communities. On the edge of downtown, Red Agave Adventure Resort is a unique accommodation with fully equipped studio apartments that are perfect for couples, and chalets for families or groups. With kitchenettes, grills, a swimming pool, hot tubs and fire pits, it’s a contrast to the luxury and spa-style hotels that are ubiquitous in Sedona.

Do: Book a professionally guided ride with either of friendly cross-town “rival” Jeep tour operators. Red Rock Western Jeep Tours and Pink Adventure Tours are Sedona staples and both offer a variety of experiences ranging from a couple hours to full day, showing off the best of Sedona and nearby sites.

Thank you! Your submission has been received!
Oops! Something went wrong while submitting the form.
Last Updated
July 27, 2022 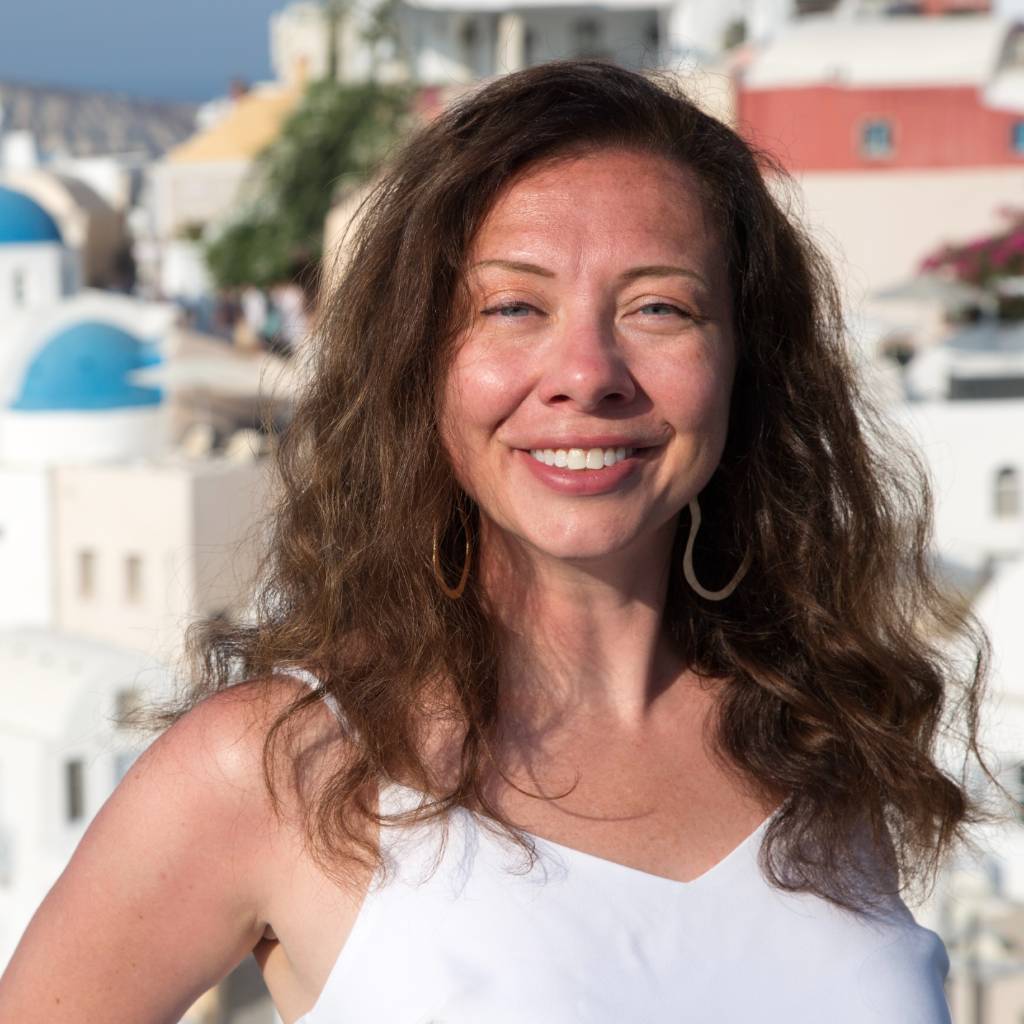 Angela DiLanzo is a native of Philadelphia, Pennsylvania, who has spent plenty of time in Sedona both independently and leading guided group tours throughout the region. She is an expert in U.S. domestic travel, group travel, and a proficient global traveler. She recently ventured to her seventh continent, Antarctica, and is currently traveling North Africa and Europe.