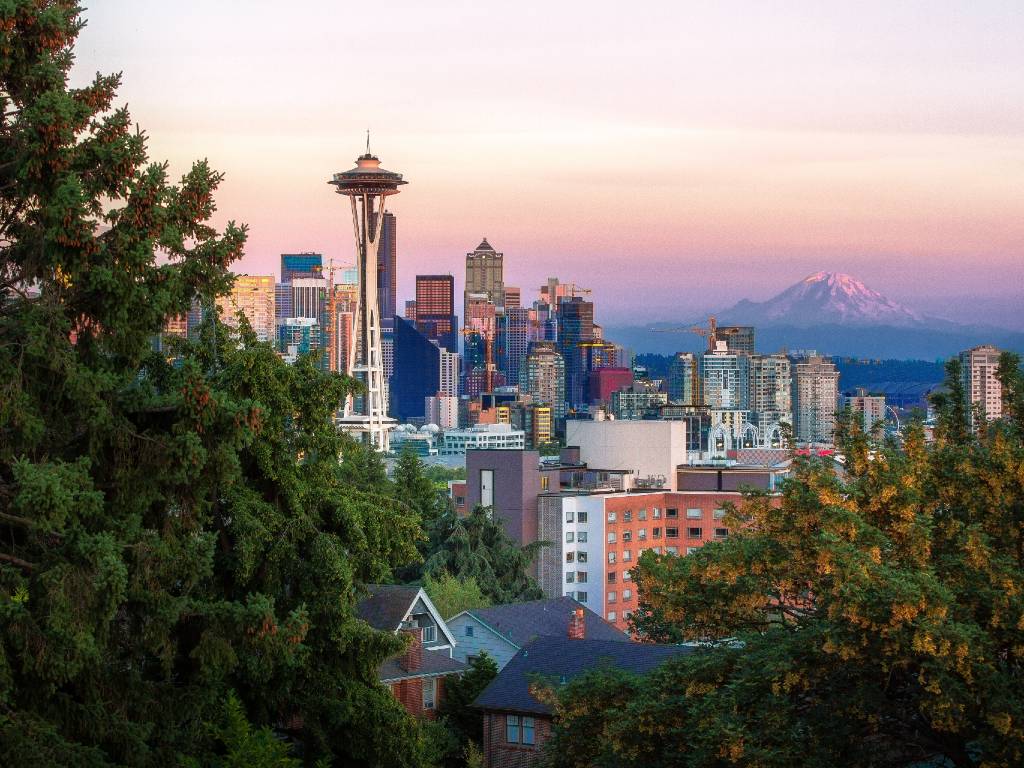 Here’s the map. West looks across the deep blue waters of Puget Sound towards the Olympic Mountains. Two lakes, Lake Washington and Lake Union, mark the middle. A man-made fish ladder—an early monument to Seattle’s ingenuity—allows salmon to return to their spawning ground to the east, the glacier-fed rivers of the Cascade Mountains. In the middle of all this: downtown, highrises, bus lanes, the market with its fish and flowers, and so much green it’s easy to see why the city’s nickname is “The Emerald City.”

Over the last decade, tech giants have changed Seattle from a flannel-wearing second- or third-tier city to a thriving metropolis, gentrified to the eyebrows. Moss-covered long term residents grumble about the change, the cost of living, the crowds. But the smell of spruce and salt water gets under a Seattleite’s skin, never mind the rainy days. Catch a true Seattleite at sunset on a late summer evening and they’ll confess there’s no place they’d rather be.

Seattle got its name in the 1850s, but Native Americans settled along the banks of the Duwamish river (named for the tribe) nearly 10,000 years ago. The temperate climate and an abundance of natural resources made for prosperous lives, and native people had time and resources to become prolific artists. Today, many pieces of this art are on display at the Seattle Art Museum.

Chief Seattle, the city’s namesake, is buried just north of Bainbridge Island on the Port Madison Reservation but his likeness appears frequently as graffiti on cable boxes and warehouse doors. His speech to Washington’s Governor Stevens in 1854 remains an often-quoted eulogy to the loss of native lands and a plea to care for the environment: “Humans merely share the earth. We can only protect the land, not own it.”

The city beneath the city

After a failed attempt to establish the heart of the city on the West Seattle peninsula, early settlers moved to current day Pioneer Square. Look down and you’ll see chunks of purple glass embedded in the sidewalks. That’s to let light into the city below, Seattle’s Underground.

In 1889, the Great Seattle Fire burned this district to the ground. In an attempt to prevent that from ever happening again, the city was rebuilt in masonry (the neighborhood still contains some of the finest Romanesque architecture in the US). The new construction was indeed fireproof, but planners failed to take into account the soft soil of Puget Sound’s tidal flats. The highrises of the time—six and eight story brick buildings—settled, settled, and settled some more until entire first floors had become basements. Stubborn businesses continued below ground level until 1907 when the city condemned the lower floors.

Nowadays, the Underground Tour is a popular tourist attraction, and while there’s not so much to see, the guides are excellent storytellers.

Fighting for change since 1919

Capitol Hill’s Autonomous Zone—a byproduct of the city’s Black Lives Matter protests—earned the city its “Anarchist Jurisdiction” moniker, but it’s not the first time Seattleites have taken to the streets en masse.

The WTO protests in 1999 appeared in The Battle In Seattle, a 2007 high-budget movie featuring Ray Liotta as the city’s mayor. In real life, the city was paralyzed for days while every night the streets filled with tear gas and riot police.

Perhaps the earliest recorded mass protest by Seattle residents, though, was the general strike in 1919, when tens of thousands of workers brought the city to a halt for almost a week to protest working conditions.

With all this progressive action on the part of the people, it’s not surprising that Seattle was one of the first places in the nation to institute a $15 per hour minimum wage. Nationally, Washington State was among the first to legalize marijuana and sanction gay marriage.

Seattle by the book

Seattle has repeatedly jockeyed for first place against DC and Minneapolis for the rank of the country’s most literate city. The public library’s postmodern main branch is a monument to Seattle’s love for books. And the city has a celebrity librarian, Nancy Pearl, who’s a best selling author and a respected voice for books and reading.

Want to read Seattle? Daudi Abe’s Emerald Street: A History of Hip Hop in Seattle covers the scene from Sir Mix-a-Lot to Macklemore, Ijeoma Olua wrote the best-selling So You Want to Talk about Race. Seattle still talks about David Guterson’s Snow Falling on Cedars and Jamie Ford’s Hotel on the Corner of Bitter and Sweet—two works that look at the region’s shameful history with its Japanese citizens.

Not far from Elliott Bay Books is Richard Hugo House, a cultural center for the written word where writers and readers gather to learn and celebrate the fact that no matter where we rank (top ten, always), we love a good read.

Fact check time: The Seattle sound didn’t start in Seattle. It started in Olympia, a college town 60 miles to the south. That’s where Kurt Cobain’s unmistakable voice sparked a fire in the imaginations of a generation of underemployed and disaffected youth. That sound became the icon of an era, but it’s not the only modern music from this city. Ben Gibbard’s Death Cab for Cutie (and his subsequent efforts) poured into bus rider headphones throughout the 00’s, and Grace Love’s voice became synonymous with Seattle soul.

More recently, Seattle singer-songwriter Brandi Carlile joined forces with a powerhouse of women musicians to form The Highwomen and record the perfect anthem for the post-pandemic era, Crowded Table.

The music scene in Seattle spans from the resident world class symphony at Benaroya Hall to a hundred indie bands occupying dive bars and outdoor stages during peak festival season. There’s no better way to get a bead on what’s happening in Seattle music right now than to tune to KEXP, the independent radio station that broadcasts music, interviews, and news about the local scene 24/7.

It’s not surprising that a fishing port should have abundant seafood. Seattle practically throws a party during Copper River salmon season, but the city also feasts on shellfish from nearby oyster farms. Crack open Naomi Tomky’s Pacific Northwest Seafood Cookbook and make the slow roasted salmon to experience what Seattle has on its plate.

Foragers have good luck finding wild mushrooms and fiddlehead ferns right in the city, but you don’t have to get dirty. Shop the region’s finest organic produce and dairy at the extensive farmer’s market scene year round, rain or shine. Beecher’s makes smoked cheddar that will go well with the bread from Tall Grass, and thanks to the temperate climate, there’s an abundance of greens, year round. What to make with all that veg? Get Plum: Gratifying Vegan Dishes by chef Makini Howell and win over the vegan-skeptic at your table.

Seattle faces east for culinary inspiration, towards China, Japan, and Southeast Asia. Nothing takes the edge of the winter damp chill like a bowl of pho, Vietnamese noodle soup; nearly everyone has a favorite pho joint. The outer burbs offer an international variety of dining—Indian, Ethiopian, Korean, Filipino, you name it. Spice Bridge, a new food court in Tukwila, not far from the airport, has rotating international food startups. One day you might get Senegalese food, the next, Jamaican. Curious diners will never go hungry.

Coffee fuels Seattle through many a gray day and, while tourists line up to take pictures outside the city’s oldest Starbucks location in Pike Place Market, there are over 800 cafes where you can get your caffeine hit. Seattle has never been short on pho joints, but now Vietnamese cafes are popping up with Coffeeholic and Hello Em bringing one more aspect of Vietnamese cuisine to enthusiastic Seattle coffee lovers.

>> Get more tips on where to eat and drink in our travel guide to Seattle.

Seattle can’t claim the invention of flight, but the city was a critical player in the launch of commercial air travel. The Pacific Aero Products Company—later, The Boeing Company—was founded here on the banks of the Duwamish River.

William Boeing’s red barn, where the flight engineer built his first aircraft, now houses exhibits at the Museum of Flight. But innovation was on the agenda pre-Boeing; the Alaska Pacific Yukon Expo in 1915 showcased a steam locomotive, a telephone line so East Coasters could hear the Pacific ocean, and a significant role for women in the planning committee for the event. The World’s Fair came to Seattle 47 years later, forever changing the skyline with its iconic Space Needle.

Microsoft and Amazon were started here, along with hundreds of tech and dot com companies, as were REI and Eddie Bauer, two leading outdoor gear and clothing brands. The city also claims the cordless phone (debuted at the World’s Fair), the automatic car wash, Pictionary, and the Slinky Dog.

Seattle has been the backdrop for many tv shows and movies.

In a 1996 episode of The Simpsons, Homer was recruited to work for a high-tech super villain in a city that looks remarkably like Seattle. Anastasia Steele and Christian Grey played out 50 shades of relationship dynamics in Grey’s downtown Seattle apartment, while in Grey’s Anatomy, ferries slide across the water against the city’s distinctive skyline.

10 Things I Hate About You chews through Seattle scenery (that paintball scene is in industrial cool Gas Works Park) and the Kerry Park view is very similar to Frasier’s in the post-Cheers TV show. Tom Hanks lived in a Lake Union houseboat in Sleepless in Seattle and Bridget Fonda poured coffee for disaffected Gen Xers in Singles.

More recently, Lindy West’s book, Shrill, was made into a TV series (filmed and set in Portland) featuring a character based on the Seattle author and, in part, her contentious relationship with Seattle indy news editor-in-chief Dan Savage.

Marie Semple’s Where’d You Go Bernadette is another Seattle-set book converted to the screen and while it’s a secondary plot line, those blackberries that choke any unattended green space in town are all too real. Take note: Vancouver, Canada, often acts as a stand in for Seattle in movies and TV shows set here. Both cities are green and full of water features, but only one has the Space Needle in the skyline.

Read our guide to the best small towns in the US or join Scott's Cheap Flights and save up to 90% on airfare.

Thank you! Your submission has been received!
Oops! Something went wrong while submitting the form.
Last Updated
March 10, 2021 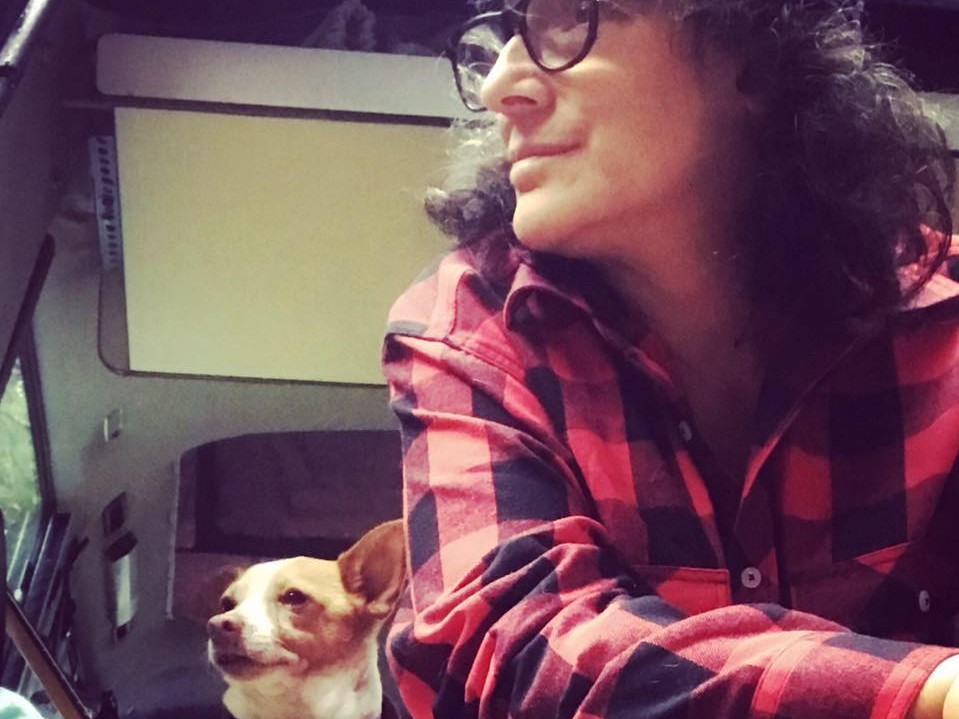 Pam Mandel is a freelance writer from Seattle, Washington. Her dog loves car rides but hates camping. Learn more about her work at www.nerdseyeview.com.