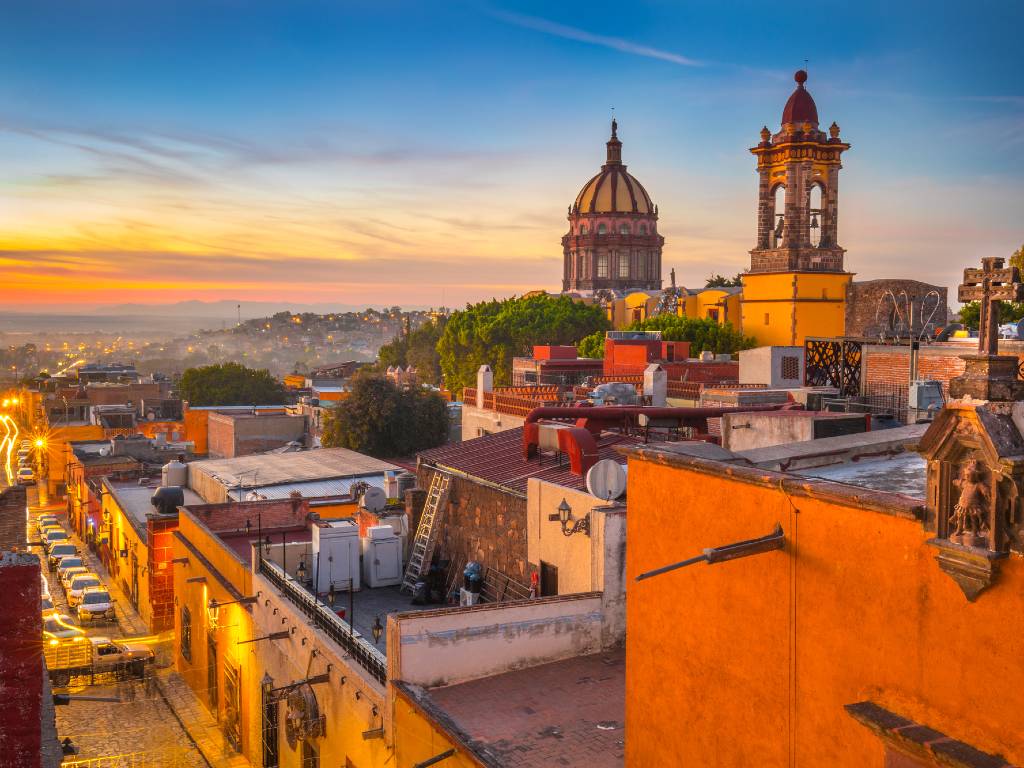 The Heart of Mexico

That’s the tourism slogan of San Miguel de Allende, and this historic city in the state of Guanajuato in the mountains of central Mexico has certainly won the hearts of many visitors.

With its colorful houses, cobblestone streets, frequent fiestas, and buildings that went up before the US was even a country, there’s an enchanting atmosphere that makes visitors fall in love.

The UNESCO World Heritage city continually places near the top of travel magazine reader’s polls as one of the top cities in the world. Many who visit are so smitten that they start making plans to move. In fact, a whopping 10-15% of the city’s population of approximately 150,000 is international expats.

From independence to artistic revival

San Miguel de Allende was officially founded in 1542 by Franciscan monk Juan de San Miguel, whom the city was originally named for. Allende was added to the name thanks to the heroics of a resident nearly 300 years later.

When the Mexicans started making plans to break free of Spain’s rule in the early 1800s, San Miguel played a role in the planning and the action. A local named Ignacio Allende marched troops to the state capital of Guanajuato for the first battle of the revolution. After he became a martyr in the 11-year struggle for independence, Allende’s name was added to that of the city’s.

While it’s now easy to call San Miguel de Allende Mexico’s most picturesque city, nobody was saying that a century ago. Much of the population emptied out after a flu epidemic and many of the buildings sat abandoned for decades.

It wasn’t until the 1960s, when San Miguel de Allende became a favored artists’ destination for foreigners, that the path to reconstruction started. Lured by attractive prices and the year-round nice weather, the trickle of immigrants eventually became a flood and helped turn the city into a showpiece.

Aspiring artists still come to study at Instituto Allende and Zenteno Bellas Artes. Many eventually find a place where they can live and work long-term. The art scene is more vibrant now than ever, with the added bonus that there are enough people with money to sell to, so the painters, sculptors, and jewelry makers don’t have to be starving artists. Take a virtual tour by exploring the galleries of Fábrica La Aurora, a former textile factory converted to a space for dozens of quality galleries and workshops.

The city’s most famous site is the neo-Gothic church, La Parroquia de San Miguel Arcángel, fronting the main plaza. The original church went up in the 17th century, but in 1880 a self-taught architect named Zeferino Gutierrez added the more fanciful façade, which was modeled after a stamp on a letter from Europe—a continent he never visited.

There are a few large hotels built from the ground up this century, but others are renovated mansions that date back to colonial times. For example, Casa No Name used to be the home of a prominent priest and had tunnels connecting it to a nearby convent. The main restaurant building of Belmond Casa de Sierra Nevada was once the grand home of the archbishop (his former bedroom is now the bar). And, the five-room Hotel Amparo once served as the mayor’s residence.

The Sistine Chapel of Mexico

San Miguel de Allende is more of a strolling destination than a “see and do” destination filled with museums, but about 15 minutes away is a separate UNESCO World Heritage site on its own.

Known as “the Sistine Chapel of Mexico,” the 16th-century Sanctuary of Atotonilco has an interior completely covered with paintings of biblical scenes, some rather gruesome, that artists Miguel Antonio Martínez de Pocasangre and Rodriguez Juárez created over the course of three decades.

The two elements come together for those fortunate enough to catch a wedding celebration, since bigger-than-life-sized figures representing the bride and groom will sometimes be parading down the street. The mojigangas (which were brought from Spain to Mexico in the 1600s) also show up in different forms in parades and festivals, often dancing around to the music.

Any excuse for a fiesta

In San Miguel, there’s something to celebrate every month. One of the events unique to the city is Dia de los Locos—Day of the Crazies. Taking place in mid-June, it’s a visual delight of wild costumes, mojigangas that range from comical to macabre, and jocular dressed-up groups throwing candy to the kids.

San Miguel is also one of the best places to experience Day of the Dead, which really takes place over three days from October 31st to November 2nd. While there’s no parade in 2020 thanks to social distancing needs, the core elements of altars, sugar skulls, and roaming locals in skeleton makeup and fancy clothes will still be out in force.

Many holidays around religious days are celebrated with gusto, whether that’s fireworks and exploding effigies filled with candy at Easter, all-night revelry during the Feast of San Miguel Arcángel in the autumn, or parties and parades for more than the 12 days of Christmas.

Dining where the sun shines (almost) every day

With its pleasant year-round climate at 6,000 feet and some 330 days of sunshine, it’s easy to spend a week in San Miguel de Allende without ever eating indoors. More than 20 rooftop bars and restaurants have city views, while others are located in open-air courtyards.

San Miguel’s dining scene is heavily influenced by the year-round availability of fresh produce, as well as by its expat community, with gourmet dining options that stretch the boundaries—and plenty of interesting tequila cocktails in the mix.

While there’s no true signature dish for the area, Mexican staples like chicken enchiladas, carne asada, and chilaquiles can be found on menus or sold at food stalls around the city. Follow the locals’ lead and order a big arrachera platter to be shared. This is a big serving plate of grilled steak, chorizo (spicy sausages), onions, peppers, and queso fundido (melted cheese). Pop what you want into warm corn tortillas, add some salsa, and enjoy.

An ancient pyramid that tells time

A strange cosmic pyramid outside of town changed the map of Mesoamerican history. Before its discovery, historians thought that advanced science and astronomy in this part of the world was limited to the Aztecs and the Mayans, with a vast knowledge wasteland in between. Local tribes, who were primarily Otomi, constructed the complex over a period from 540 to around 1050 AD.

Now called the Cañada de la Virgen archeological site, it’s located near a rugged canyon that’s also good for horseback riding or hiking. The pyramid lines up with certain planet and star formations at different times of the year, plus the pyramid is aligned so the sun sets in certain points for solstices, planting time, and harvest time.

While the northern Baja Peninsula of Mexico produces around 85% of the country’s wines, the Bajio region (which includes parts of the states of Aguascalientes, Jalisco, Guanajuato, and Querétaro) has been growing grapes for two centuries longer.

The Spanish started growing grapes here as early as the 1550s. Now there are more than 30 wineries across the region, with several open for tastings within a half-hour of San Miguel de Allende, including Dos Búhos (Two Owls), Tres Raices (Three Roots), and three run by the La Santísima group.

Both Tres Raices and the Santisma wineries have young female winemakers at the helm. They all grow a wide variety of grapes and are still experimenting, but some that do best in this climate are sauvignon blanc, cabernet franc, tempranillo, and several varietals that work well for dry rosé. The state tourism office publishes printed wine route maps you can pick up for free, though you’ll need to use your Spanish language app to translate to English.

San Miguel on the screen and page

Surprisingly few films are set in picturesque San Miguel. Perhaps this is because the big-budget Robert Rodriguez film Once Upon a Time in Mexico disrupted life so much for the residents that they don’t want to repeat the experience. The film is worth seeing for the visuals—though the script doesn’t quite live up to the promise of its all-star cast including Johnny Depp, Antonio Banderas, and Salma Hayek.

The city is the setting for several books, however. The best-known is On Mexican Time: A New Life in San Miguel, by Tony Cohan, about the author and his wife moving to the city and renovating a dilapidated 250-year-old home. Although its 1999 publication preceded the boom to come, it still captures the city’s essence the best.

Many travelers to San Miguel de Allende fly into León, about 75 minutes away via shuttle bus.

Join Scott's Cheap Flights and save up to 90% on flights. 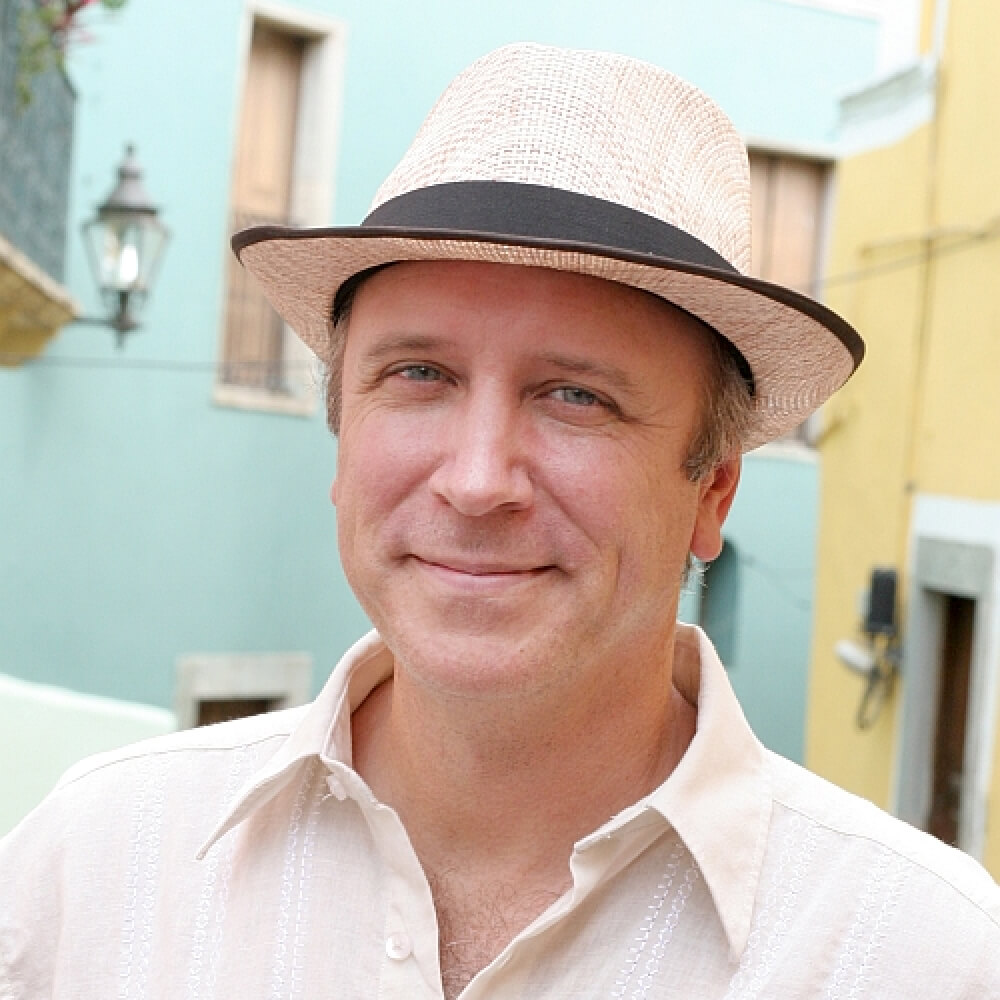