Portland: The Foodie City That Embraces the “Weird” 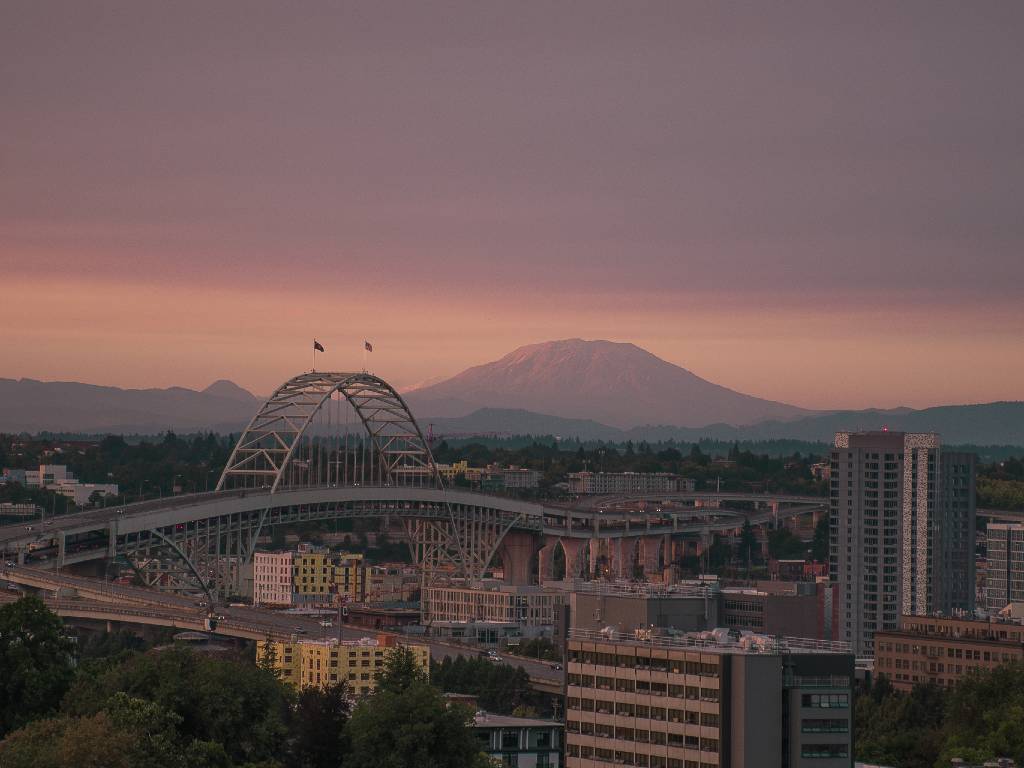 Keeping it weird since 2003

While Portland may not have been the first to use a version of the phrase, “Keep Portland Weird” has become the city’s mantra. Far from a slight, it’s a badge of honor locals wear proudly—and that was true long before IFC’s show “Portlandia” brought some of the city’s quirks to a national audience.

The intent of “Keep Portland Weird” when it was brought to the city in 2003 was to encourage the support of the small local businesses that make Portland unique. Today, the slogan adorns bumper stickers, shirts, hats, and other paraphernalia, along with a huge mural downtown.

There’s more than one instrument-playing unicycler in Portland, but none is better known than the Unipiper. You’ll know him by the kilt and (sometimes) Darth Vader mask—and from the flames that occasionally spout from his bagpipe. And the world’s oldest working drag queen, Darcelle, hosts cabaret-style shows, has served as the grand marshal of the city’s Starlight Parade, and makes frequent appearances at charity fundraisers.

Portland “weirdness” isn’t limited to individuals who seem to be professional oddballs, though. Everyday residents add to the quirkiness in their spare time, organizing events like the annual Adult Soap Box Derby and yarn-bombing downtown’s adorable animal sculptures with ugly sweaters for the holidays.

In 1845, the two men who founded Portland each wanted to name it after his New England hometown. A coin toss decided the question, and Francis Pettygrove’s beloved city in Maine got its Pacific counterpart. If, on the other hand, Asa Lovejoy had won the toss, you’d be reading about Boston, Oregon right now.

Portland has several nicknames. All the river-crossing bridges led to “Bridgetown,” and “Stumptown” comes from the time when the city grew so quickly that when trees were felled for building, no one could spare the time to remove the stumps.

While the official nickname is “The City of Roses,” the best-known nickname is “Rose City.” In the late 1880s, roses were planted along the city streets. By the time the Lewis and Clark Centennial Expo took place in 1905, roses lined more than 200 miles of road. In the years leading up to World War I, the International Rose Test Garden was established to preserve Europe’s beloved blooms from the ravages of war. Today, the garden is home to more than 10,000 rose bushes representing more than 610 rose varieties.

Though so many young people go to Portland to retire, it’s usually not hard to identify newcomers. Locals just listen to how they pronounce a few key spots. Oregon is pronounced ORE-uh-gun, the Willamette River is will-AM-et (rhymes with “damn it”), Glisan Street is GLEE-sun, and Couch Street is cooch—yes, really.

Portland has, let’s say, something of a reputation when it comes to the weather. You’ve heard it rains a lot here, and it does—but while the city ranks third overall in the US for the average number of rainy days per year (164, if you’re counting), Portland isn’t even in the top 15 for the highest annual rainfall.

Most of the rainfall doesn’t come in torrential downpours; it’s a rare local who even bothers to carry an umbrella. Instead, it’s more like you’ve just walked into a cloud, so even when it rains for hours on end there’s very little in the way of accumulation. Portlanders (who love to point out that Seattle is wetter) never let the rain stop them from getting outside. After all, there’s no bad weather, just bad gear.

Over the rivers and through the woods

Both locals and visitors appreciate Portland’s proximity to an impressive variety of landscapes, but not everyone knows why it’s so easy to go from urban to rural surroundings so quickly. The Portland Metro Area’s Urban Growth Boundary imposes strict land use regulations that protects land outside the boundary from sprawl and encourages developers to build vertically inside the boundary.

That means you can go from city to farmland in the blink of an eye. Some of the rural areas surrounding the metro area include rolling hills covered in vineyards and two major rivers (one of which brought Lewis & Clark through). There’s even a dormant volcano inside the city limits.

Back in 1985, when the first animated shorts of The Simpsons appeared on The Tracey Ullman Show, no one in Portland would have imagined that the city would someday draw fans of the hilariously dysfunctional family to see where its creator, Matt Groening, was born.

While the show’s town has a different name (and Springfield, Oregon is about 109 miles south of Portland) Groening incorporated many landmarks of his hometown into the show. For example, Burnside Street and Montgomery Park combine to give perennial baddie Montgomery Burns his name. Other streets that appear as monikers for Simpsons characters are Flanders, Kearney, Lovejoy, Quimby, and Terwilliger.

Portland is home to both enormous Forest Park—which is one of the biggest urban forests in the US with 5,200 acres and some 80 miles of trails—as well as the smallest park in the world.

Mill Ends Park is a tiny circle of 452 square…inches, otherwise known as about two feet across. Originally intended to house a lamppost, the little plot of dirt was turned into a park in 1948 by a local journalist who decided to plant a few flowers there before the city got around to installing anything. And, of course, oddity-loving locals embraced it.

The most popular sport in the world has a happy home in Portland. The Portland Timbers got their start in 1975, and almost immediately games drew crowds of 20,000 fans. The club joined Major League Soccer in 2011 and every home game since has been sold out—there’s a years-long waiting list for season tickets. In 2013, the Timbers were joined by the Portland Thorns, one of the National Women’s Soccer League’s original teams.

Both teams have active supporters groups who fill the North End of the stadium with a constant buzz of songs, chants, flags, banners, drumming, cheers, and even a horn section—but locals argue the Timbers have the best mascot. When the home team scores, chainsaw-wielding Timber Joey cuts a slab from the Victory Log, and the slab is given to the goal-scoring player.

Portland was recently named the Best Foodie City in the United States, and ranks among the top 10 for most restaurants per capita. Given the city’s size, there’s an unexpected diversity of cuisines fueled by both the city’s strong entrepreneurial spirit and the thriving food cart culture.

Portland’s first mobile food sales date back to a horse-drawn cart in the early 1900s, but food carts really became popular after the economic downturn in 2007, as food carts are inexpensive alternatives to restaurant ownership. Not to be confused with highly mobile food trucks, these carts tend to stay in one spot.

Today, there are more than 600 food carts in the city, including some that developed a devoted following and eventually became brick-and-mortar restaurants, such as Nong’s Khao Man Gai. You can get a taste at home, too. Nong’s sells its addictive khao man gai sauce to enjoy wherever you are.

Portland is known for its craft breweries, and it has a growing list of urban wineries and craft distillers—including the gin that actor Ryan Reynolds loved so much he bought the company.

Portland caffeine addicts raise coffee roasting to an art form; local favorites include Coava and Heart Roasters, both of which have online shops. Oprah’s beloved Moonstruck Chocolate started in Portland in 1993, but there’s plenty of local competition in the sweets department now (check out Xocolatl de David). Salt & Straw’s unusual ice cream flavors draw long lines outside the shop—and, yes, they ship, too.

Making a Portland mixtape is easier than you might expect, since lots of popular bands have Portland ties.

In the 1990s, it seemed like the whole world was singing along to Everclear, while The Dandy Warhols made a name for themselves as underground darlings, and Elliott Smith made everyone cry. In the past two decades, indie rock bands like The Decemberists, The Shins, Portugal. The Man, Sleater-Kinney, and She & Him have either gotten their start in Portland or adopted the city as home.

In other words, almost regardless of the style of music you prefer, Portland has a tune or two for you.

Ready to go? Read our ultimate guide to things to do in Portland, and join Scott's Cheap Flights to find amazing deals to destinations in the US and around the world.

Thank you! Your submission has been received!
Oops! Something went wrong while submitting the form.
Last Updated
March 2, 2021