Nova Scotia: The Canadian Province With the Highest Tides in the World 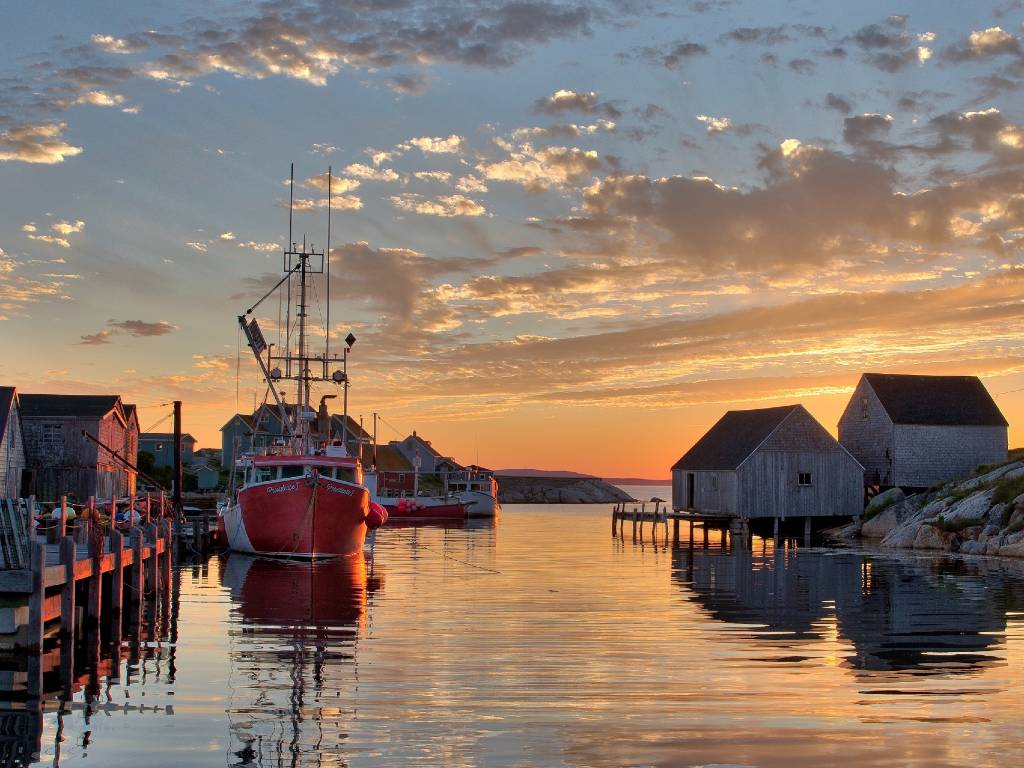 Located on the east coast of Canada with a population of just less than one million people, the province of Nova Scotia is affectionately known as Canada’s Ocean Playground. The province is 360 miles long and just 80 miles at its widest point, so you’re never more than about 40 miles from the ocean—and the seafood-filled menus, stunning coastal drives, and friendly people won’t let you forget it.

When the Titanic sank in 1912, a ship from Halifax was one of the first to arrive. One hundred and fifty of the bodies recovered from the water are now buried in Halifax in three different cemeteries: Fairview Lawn Cemetery, Mount Olivet Cemetery, and the Baron de Hirsch Cemetery. There’s even a tombstone with the name J. Dawson. While fans of the Titanic film may want to imagine it’s the real-life Jack Dawson, it’s actually the resting place of Joseph Dawson who worked as a coal handler on the ship.

The Maritime Museum of the Atlantic houses the largest collection of wooden artifacts from the disaster including a piece of wood that the famous “door” from the film was modeled after.

Nova Scotians have been the ones in need as well. On December 6, 1917, the world's largest manmade accidental explosion (now second only to Beirut, Lebanon) occurred in the Halifax harbor.

During a busy, foggy morning in the harbor, two ships—one full of munitions—collided. A fire started onboard the ship with munitions and 20 minutes later an explosion occurred. The blast was so powerful it instantly killed 2,000 people, injured 9,000, and flattened 1,600 homes. To make matters worse, a blizzard dropped 16 inches of snow on the city that night.

Help was sent from all over, but the biggest gesture of kindness came from Boston. The city sent a train full of supplies, doctors, nurses, vets, and more. To thank them for their kindness, Nova Scotia now provides the city of Boston with its annual Christmas tree.

Today, St. Paul’s Anglican Church still has a piece of steel embedded in it from the blast, the Halifax City Hall clock is frozen at the exact time of the explosion, and visitors can still see where a 1,140-pound piece of anchor landed more than two miles away from the site. Visitors may also notice a more subtle reminder of the tragedy. When the explosion happened, all of the street signs were knocked down and ambulances and people couldn't find the right streets. When the streets were repaved, the cement was imprinted with the street names at street corners, and a few of these still exist today.

The first people to live in Nova Scotia were the Mi’kmaq who lived on this land for more than 10,000 years before colonizers arrived. The area was originally known to them as Mi’kma’ki (Meeg-ma-gee) and still is to this day. Many Mi’kmaq still live throughout Nova Scotia.

A great way to learn about the Mi’kmaq, their history, and way of living in Nova Scotia, is to visit Eskasoni Cultural Journeys in Cape Breton. It is home to the largest Mi’kmaq speaking community in the world, and visitors can learn about Mi’kmaq food, medicine, and more. Membertou Heritage Park has an exhibit on the Mi’Kmaq, five acres of living history to explore, and classes in making traditional drums and earrings.

With over 50 craft beer breweries in Nova Scotia, the locals definitely have a love of beer. However, this passion goes back hundreds of years. The first brewery in Nova Scotia was founded in 1820 by Alexander Keith & Son, who brewed his namesake Alexander Keith’s IPA. Keith went on to be elected mayor of Halifax in 1843, 1853, and 1854. The company even launched a humorous marketing campaign to re-elect him posthumously (though he wasn’t actually on the ballot).

The Good Cheer Trail highlights the more than four dozen breweries now in the province (along with cideries, distilleries, and wineries for a total of 90 stops on the trail). For each spot you visit, you can check-in online and be entered to win a t-shirt and other prizes.

Land of the lobster

Barrington, Nova Scotia, is officially known as the “Lobster Capital of Canada.” Lobster is caught in Nova Scotia year-round with ships fishing from different areas around the province throughout the year. Areas 33 and 34, where Barrington is located, are home to the longest and best lobster fishing season, which runs from the end of November to May 31st.

Just like the Good Cheer Trail, Nova Scotia also has a Lobster Trail.

While lobster is celebrated in all its forms, the lobster industry in Nova Scotia is complicated.  Recent disputes between the Mi’kmaq and other Nova Scotia fishers overfishing treaties and rights motivated many Canadian and international chefs to boycott Nova Scotia lobster for a time in 2020 in support of the Mi’kmaq people. At the end of the year, the Mi’kmaq First Nations bought 50% of Clearwater, North America's largest shellfish producer.

A donair by any other name

While seafood is extremely fresh and popular in Nova Scotia, the official food of Halifax, its capital, is the donair. A donair is a kebab made with beef mixed with spices, cooked on a spit, and shaved into a Lebanese pita. It is then topped with tomatoes, onions, and a sweet donair sauce made of condensed milk, garlic powder, and vinegar.

While it’s similar to the Turkish döner, Greek gyro, and other variations on shaved meat from a spit served in pita, this version is unique to the city due to its sauce, which was invented and perfected by two Greek brothers. Many recommend it to be best enjoyed after a few drinks, and endless variations exist. The meat, veggies, and sauce can even be found as a pizza topping, on poutine, in a sub or calzone, in egg rolls, and more.

A wee bit of Scotland

In the late 1700s and early 1800s many Scottish immigrants came to Nova Scotia and many still speak the Scottish Gaelic language in the area. It’s taught in some schools and there is also a Gaelic College/Colaisde na Gàidhlig that promotes and preserves the traditional Gaelic culture.

Scottish family names like MacDonald are common in Nova Scotia and even some Scottish foods are still popular in the province. One of those is oatcakes which can be found all over Nova Scotia but are more in abundance in Cape Breton. Made in various shapes and thickness, plain, dipped in chocolate or sandwiched with peanut butter, oatcakes are essentially a cookie made of oats, butter or shortening, flour, sugar, salt, and water.

“The Graveyard of the Atlantic”

Located 97 miles off of the coast of Nova Scotia, Sable Island National Park Reserve is 26 miles long but only 0.9 miles wide at its biggest point. Despite its distance from Halifax, it’s technically part of the city, but visiting the island is easier said than done.

Over the years from the 1500s when the first Europeans were believed to have visited the island up until 1999, there have been over 350 shipwrecks on and around the island, leading to its nickname “the Graveyard of the Atlantic.” The island is often shrouded in fog, located in the middle of a main shipping route and near prime fishing areas, and is surrounded by strong currents. Combine that with navigational error and it’s a recipe for danger.

Four Parks Canada staff live on the island year-round with the number increasing in the summer months with research projects and tourism. The island and surrounding waters are also home to a colony of an estimated 400,000 grey seals, but the most famous inhabitants of the island are the Sable Island wild horses. It is assumed that many of them ended up on the island from shipwrecks (while others were likely left behind by people who lived on the island). There are more than 500 horses that live on the island and have adapted to living a harsh life, drinking from the few ponds on the island or learning to dig in the sand to find water.

The most common way to visit the island is by small plane however, it isn’t cheap and is weather dependent so be prepared for potentially getting stuck there a few days.

The highest tides in the world

Nova Scotia is home to the highest tides in the world. In the Bay of Fundy, the tide can reach as tall as 53 feet as 160 billion tons of water flow in and out of the bay every 12 hours. Because the tides are so extreme, when the water rises it actually goes back up rivers, almost changing their directions and causing tidal bores—huge waves and currents caused by the two directions of water flowing together and mixing.

The tidal bores going up the Shubenacadie River are some of the only tidal bores in the world that you can ride, almost like whitewater rafting. There are multiple tidal bore rafting companies along the river that take guests out on Zodiacs to enjoy this natural phenomenon. Just be warned you will definitely get soaked and probably a bit muddy.

The Bay of Fundy is also a popular feeding ground and nursery for whales in the summer months and whale watching tours here have almost guaranteed sightings of species like fin whales, humpback whales, minke Whales, North Atlantic right whales, and more.

Nova Scotia has more than 8,000 miles of coastline with hundreds of gorgeous beaches to enjoy. The province is a popular destination for surfing, in particular during the winter months when the waves are at their biggest and best.

How I wish I was in Sherbrooke now

The TikTok sea shanty trend may have faded away by now, but these traditional folk songs have always been popular in Nova Scotia. Originating on merchant sailing vessels as songs that helped the sailors keep time with work like pulling lines, today the tradition has been kept alive by the locals.

Any night in downtown Halifax (pandemic times aside), you can find a pub with live music where you’ll catch the whole bar singing along to a commonly known sea shanty or two. A favorite is Barrett's Privateers, a modern sea shanty written in the 1970s.

Join Scott's Cheap Flights for amazing deals up to 90% off to Canada and around the world.

Thank you! Your submission has been received!
Oops! Something went wrong while submitting the form.
Last Updated
August 3, 2021 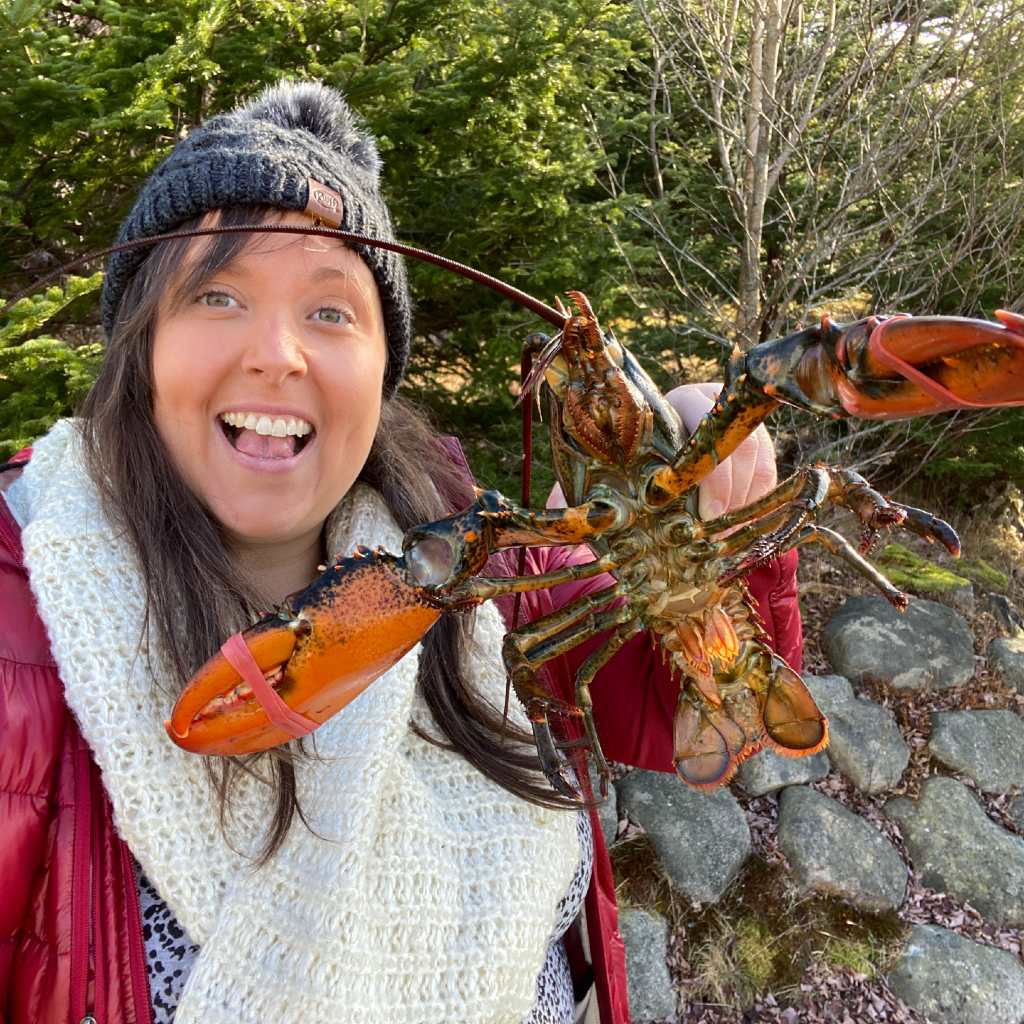 Cailin has been an award-winning travel video blogger and content creator for the past 12 years. At the beginning of 2020, she began creating a new site NovaScotiaExplorer.com to highlight her home province. Cailin has always had a passion for her home and was even a tour guide for a number of years in Halifax. Follow her for creative stories and travels around Nova Scotia and the world.