Namibia: The African Nation Home to the Oldest Desert in the World 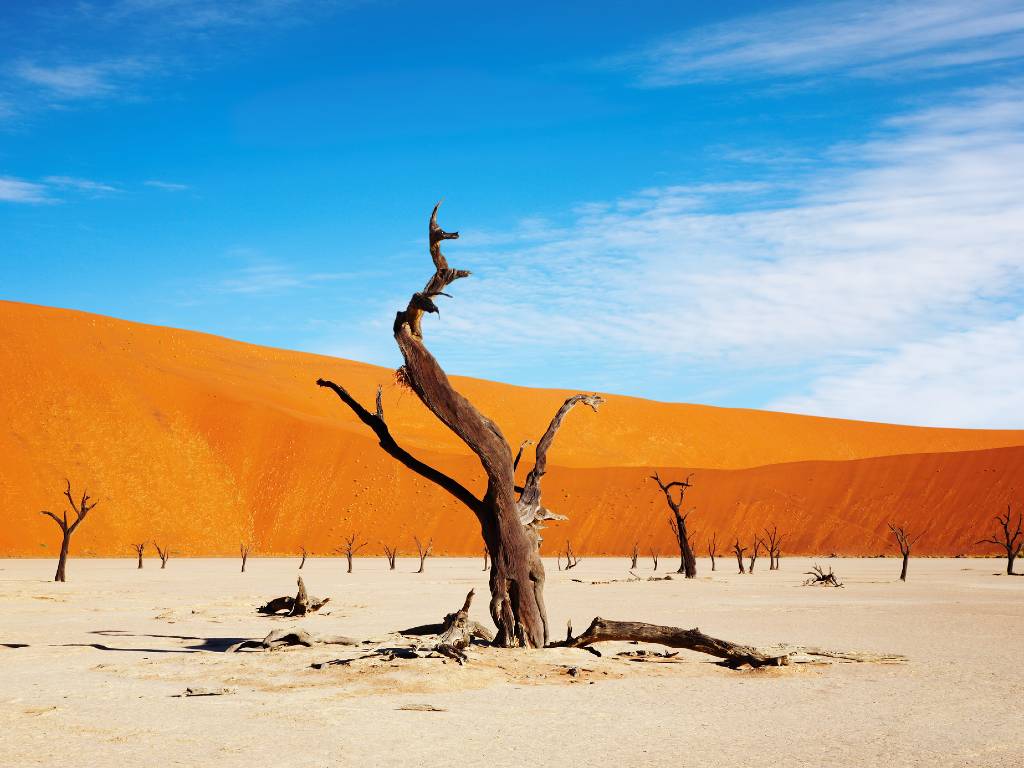 Space. Swathes and stacks of enchanting space. Namibia reigns as the second-least densely populated country in the world after Mongolia. It’s twice the size of the US state of California with about 5% of the population—that places roughly seven people to every square mile if you do the math.

While there’s evidence of people in Namibia as far back as 25,000 BC, the name Namib originates from the Nàmá people who settled there in the first century BC. Namib translates to “vast place,” and the desert that spans 81,000 square miles and covers a large swath of the country certainly fits that description.

The shifting sands of this harsh desert habitat provide a good reason why so much of Namibia remains uninhabited and why the people, animals, and other creatures that have thrived here are all the more remarkable.

The odd inhabitants of the oldest desert

Namibia is home to the world's most ancient sands. The Namib Desert has existed for roughly 50- to 80-million years utterly devoid of surface water, yet life has found a way to settle into these parched powders.

The desert-adapted wildlife found here is like nothing else on earth. There are free-roaming wild horses, fog-sipping beetles, snakes that bury themselves up to their eyeballs in sand (watch your step!), and lions that prowl the beaches and snack on seals. Impressively, Namibia is also home to the largest unfenced population of black rhinos in Africa.

The dress that’s a form of protest

In 1884, Germany established German West South Africa as a protectorate and in the early 1900s committed what is considered the "first genocide of the 20th century.” The German colonizers killed 65,000 Herero and Nama tribespeople (more than 50% of the population of those tribes).

The Namibian president recently turned down the German government's offer of €10 million for reparations, so it may seem odd that many Herero women continue to wear elegant Victorian-era dresses inspired by German garb—until you realize it's an act of protest.

Herero society has made the now-iconic dress distinctively their own with the addition of a horn-like headscarf known as otjikaiva, symbolizing cattle, a status symbol. By subverting the fashion of the Germans who committed atrocities against them, the Herero women show their resilience and honor their heritage.

Pay for it all in South African currency

Namibia was an annexure of South Africa (called South West Africa) from 1915 until 1990. In 2020, Namibia celebrated 30 years of independence, but you can still use the South African Rand (with a one-to-one exchange rate).

Shipwrecks splatter the treacherous shores of the Skeleton Coast (if that's your thing, there’s even a shipwreck-inspired hotel) and eerie dilapidated ghost towns stand testament to the harsh realities that fortune-seeking settlers faced trying to forge a life in the desert.

While the Skeleton Coast was named for the whale bones that once littered its shores, those bones have been replaced by the rusting hulls of the many boats that couldn’t contend with the area’s rough seas and heavy fog.

Now deserted, the town of Kolmanskop was once a glamorous outpost for fortune-seekers. Established in 1908 after the discovery of diamonds nearby, it was abandoned just 48 years later when even richer diamond deposits were found farther to the south. It now stands vacant—except when buses roll in for the morning tour.

Although interesting with a guide, it's best explored at dawn when golden light sparkles off the sand, much of which has begun to reclaim the old buildings. You may even be lucky enough to catch sight of one of Africa's rarest predators, too.

Toto's hit song Africa is playing in the Namib Desert right now and should do so for the rest of time, according to multimedia artist Max Siedentopf. He set up six speakers and an MP3 player that plays only that song (want to find it? The locator map should give you a chuckle). Since it’s all solar-powered, it’ll certainly never run out of juice under the hot desert sun.

Down south, intrepid hikers will also notice an old scooter lying in the sunken ravines of the Fish River Canyon. In 1968, the Cape Town Vespa Club visited the biggest canyon in the Southern Hemisphere intent on setting down the first tire tracks. One Vespa got left behind and since it rarely rains in the desert, after 50 years, it remains there, undisturbed.

Although not native to Namibia, oysters flourish in the cold ocean currents. Affectionately dubbed 'Namoysters', they are affordably available in coastal towns, such as Walvis Bay, Swakopmund, and Luderitz.

Indigenous offerings include marathon chickens (lean, flavorful chickens so-named because they are hard to catch) and mopane worms, which are caterpillars best dried, fried, and snacked on like crisps.

Traditionally harvested by the Bushmen people, the Devil's Claw herb comes with many acclaimed health benefits and has been sipped for centuries; however, distilled into an alcoholic liqueur, it’s quite bitter. Don't get tricked into downing a shot.

Of Namibia’s 12 major ethnic groups, there are several indigenous tribes, including the Himba, one of the last desert-dwelling and semi-nomadic groups living in Africa.

Traditionally, the women do not wash with soap and water. Looking to more organic bathing rituals, they instead coat their skin and hair with ochre, ash, and animal fat, lending their skin a reddish hue. They also use Namibian myrrh extracted from the resin of the Commiphora wildii tree.

Such practices are centuries-old, but today the naturally-harvested oil features in skincare products like the Mbiri Skincare range.

A mystery in the sand

Fairy circles. That's what Namibians have named the unexplained crop circle-like rings of sand that remain bare in the grasslands across the country. The circles can be as big as 80 feet across.

No one knows why they exist, but one theory suggests termites are responsible for gnawing away circles in the sand. Perhaps it's something more otherworldly? To date, there remains no universally accepted theory.

Answers in the stars

Thanks to Namibia's lack of population and light pollution, the NamibRand Nature Reserve is one of just 18 International Dark Sky Reserves in the world, and the only one in Africa.

From open-air sleepouts to luxury lodges, the reserve offers a bed for every accommodation budget, so everyone can learn how to spot the Southern Cross and use it to identify true south.

Art rocks in Namibia. Twyfelfontein or /Ui-//aes has one of the largest concentrations of petroglyphs in Africa, which are estimated to be 2,000 to 6,000 years old. Commonly known as rock engravings, these etchings document the stories of the San, the country's first hunter-gatherer inhabitants.

There are over 5,000 individual figures at the UNESCO World Heritage Site, but the most striking have to be the Dancing Kudu and the Lion Man, so named as the figures portray half-human, half-animal imagery related to shamanism. Then there are the depictions of penguins and flamingos—neither of which reside in the immediate vicinity, begging the question as to how the original rock artists came in contact with them.

Farther north, small stone men roam creating another open-air gallery. Collectively called The Lone Men Of Kaokoland, the sculptures consist of rocks held together by metal wiring and shaped into various positions: sitting, standing, and even strolling across the desert carrying a bindle like an old-timey traveler. Left by a Namibian version of Banksy, their creator remains a mystery.

Once known as the Caprivi Strip, the Zambezi Region is a sharp contrast to the desert nation and home to four gorgeous river systems. This thin, 280-mile-long strip of lush land stretches like a panhandle on the north side of Namibia, across the top of Botswana to Zambia and Zimbabwe. Elephant highway and tiger fishing mecca, it’s also where you'll most likely find fisherman poling along in traditional dugout canoes.

But perhaps more curious is how Namibia came to claim this verdant channel. The short version: the Germans negotiated the land from Britain because it ended at the Zambezi River and they thought that from there they could navigate to the sea. There was just one big problem: Between the Caprivi Strip and the sea, they’d need to get by the 355-foot drop of Victoria Falls.

Namibia’s epic landscapes have been the setting for several big-budget blockbusters. A Far Off Place, Flight of the Phoenix, 2001: A Space Odyssey, and most recently the frenetic Mad Max: Fury Road were all filmed in Namibia. You could even map out your own Mad Max meander.

Thank you! Your submission has been received!
Oops! Something went wrong while submitting the form.
Last Updated
March 5, 2021 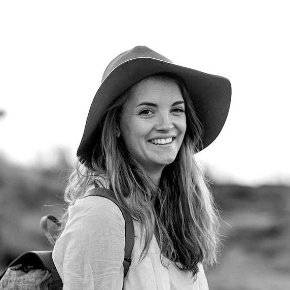 Melanie is a South African photojournalist with a soft spot for responsible travel and conscious design. She has visited almost every corner of Namibia, spanning ten trips. From driving 4X4s across the Namib Desert with family to following flamingoes to Walvis Bay and catching feisty tigerfish in the Zambezi River, she’ll keep going back for those oysters and endless horizons.