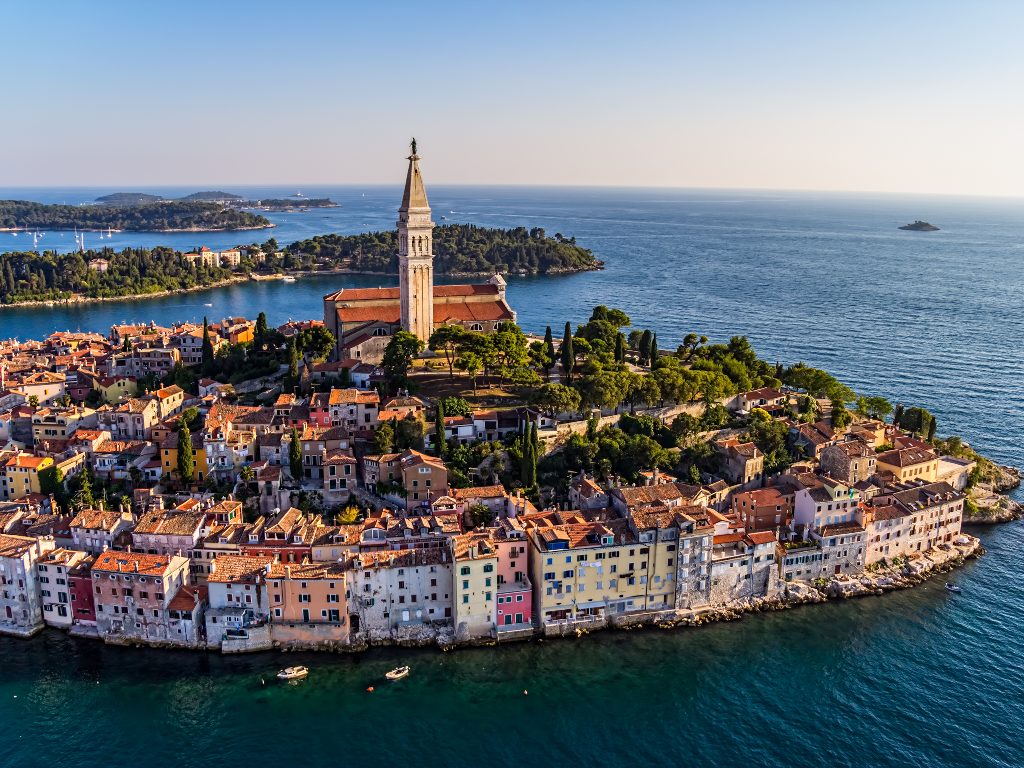 Take a boat from Venice across the Adriatic Sea and you'll reach Istria. The Romans called it Terra Magica, a name that aptly describes this heart-shaped peninsula and its magical landscape of rolling hills covered in vineyards and olive groves, and outlined by a coastline indented with rocky bays and inlets.

With a total area of 1,220 square miles, Istria is the biggest peninsula of the Adriatic and one of Croatia's four regions. A narrow strip in the north is part of Slovenia, while its northernmost tip lies in Italy. Its position at a geographical crossroads has defined its social and cultural history.

The most populous city in Istria is Pula, located at Istria’s southern tip, while Pazin serves as its administrative center. Rovinj, located on the western coast, and the hilltop town of Motovun in central Istria, are among the best-known tourist hotspots.

The landscape and climate are Mediterranean and its hilltop villages are reminiscent of its Venetian past. 2021 marks 30 years of Croatia's independence from Yugoslavia, and 8 years as a member of the European Union.

One region, many rulers

Over the centuries, Istria fell under the rule of many different civilizations, empires, regimes, and countries. Istria's first inhabitants were the Histri, an ancient people that gave this peninsula its name.

From the 10th century BCE, Istria was taken over by the Romans, followed by the Byzantines, Venetians, Habsburgs, and Napoleon. In 1814, it came under the rule of the Austro-Hungarian empire until its downfall at the end of WWI. Istria then became part of Italy until after WWII, when it was ceded to Yugoslavia. With the breakup of Yugoslavia in 1991 and Croatia's independence, Istria became one of Croatia's four regions.

The continual redrawing of borders means that generations of a family born in the same home were actually born in different countries. Someone’s grandparent may have been born during the Austro-Hungarian Empire, their parent in Italy, aunt or uncle in Yugoslavia, while the current generation was born in Croatia.

Istria's architectural heritage, historical monuments, traditional cuisine, and language are testaments of this rich and varied history. Pula’s extremely well-preserved 1st-century BCE amphitheater is a legacy of the Romans, and many examples of Austrian architecture remain in this port city. The Euphrasian Basilica in Poreč is Istria's only UNESCO World Heritage Site and an outstanding example of Byzantine architecture. Meanwhile, Italian and Austro-Hungarian culinary influences are evident in Istrian cuisine.

With neat rows of vineyards painting Istria’s landscape from north to south, it's no secret this is a wine-making region. And yet, Istria is probably the best-kept secret of wine lovers. Though Istria has been producing wine since the 6th century BCE (making it one of the oldest wine regions in Europe) the wines are still relatively undiscovered outside the continent.

One particularity of Istria is its four different colors of soil: black, white, gray, and red. Each influences the acidity levels, flavor, and nuances of each wine in a different way.

The most dominant grape varietal is white malvazija (malvasia), which creates a wine described as zesty, with notes of citrus fruit and a taste of bitter almond that lingers on the palate. Another home-grown variety is the red grape teran, which becomes a ruby red, full-bodied dry red wine with hints of forest fruit. Imported varietals growing here include muscat, merlot, pinot, and cabernet sauvignon.

Wineries are often family-run businesses and most offer guided tastings by professional sommeliers in bucolic natural settings. Some of the producers to look out for include Kozlović, Kabola, Cattunar, Clai, and Coronica.

Because of its unique history, Istria has a strong regional identity that sets it apart. The majority of its population is Croatian-speaking, with Italian- and Slovenian-speaking minorities. The distinctive Istrian dialect is peppered with Italian and German words, and accents vary from one town to the next.

One word you're bound to hear in Istria is “pomalo.” This can be translated as “slowly” or “easy does it,” and epitomizes the way of life here, which is to be savored slowly.

It's all about quality and not quantity. Working in olive groves are often several generations of the same family. These family-run operations can't compete with the big producers in Spain, but a laser-sharp focus on producing the highest quality extra virgin olive oils has earned Istrian producers many international awards.

Like wine tourism, oleotourism has caught on here. Brist and Chiavalon welcome visitors to their family groves where they can learn all about the production process and sample their exceptional olive oils.

Croatian uses the Latin script, so most visitors can easily read words in this Slavic language. But a much older alphabet was in use here from the 12th to the early 19th century. The Glagolitic alphabet dates to the 9th century, and is the oldest known Slavic alphabet.

Inscriptions written in Glagolitic can be spotted on stone monuments in several places across Istria. The four-mile-long Glagolitic Alley, running from the town of Roč to Hum in central Istria, has been lined with a series of 11 monumental stones. Each is a testament to the alphabet's history and development, while showcasing examples of Glagolitic inscriptions. The last one is visible above the town gate of Hum, which is billed as the smallest town in the world with just 30 inhabitants.

Along with olives and grapes, another gastronomic delicacy growing in the fertile soil of Istria is the white truffle. While black truffles are available year-round, the white truffle is highly prized (and very expensive!) because it grows for only a few months a year.

The Guinness Book of World Records previously recorded the world's largest white truffle as one that was unearthed in Istria in 1999, weighing 2.88 pounds, with a retail value of $5,000! (The record has since been broken.)

Specially trained dogs are used to sniff out these tubers, a type of mushroom that grows about ten inches underground. From mid-September to early January, visitors can join a white truffle hunt through the dense forests of central Istria.

Istria enjoys a mostly sun-drenched Mediterranean climate, but a cold wind that blows in the Adriatic region called bura, can be a force to be reckoned with. This strong wind comes in from the east, pushing clouds out of the way and bringing a noticeable nip in the air.

The bura is mostly welcome when it arrives. Its cold air is considered to be healthy compared to the other dominant wind called jugo, which brings warm air and often rain.

But at times throughout the year, the bura likes to show its full force and what it's truly capable of. In these cases, window shutters must be tightly shut and flower pots firmly secured on window ledges. The strong bura regularly closes highways and cancels ferry services until it dies down and moves on.

Peek inside Istria's many churches and chapels and you may be in for a surprise. The walls of medieval churches often shelter colorful frescoes dating from between the 11th and 16th centuries. During the Middle Ages, a church was not considered complete until its interiors were adorned with these vibrant wall paintings depicting biblical scenes and stories.

The tiny churches of St. Mary in Beram and St. Rocco in the hilltop village of Draguć boast some of the most stunning examples of 16th-century frescoes, with their walls and ceilings completely covered in colorful paintings.

These churches are often locked, but the key is entrusted to someone living in the town or village. Just ask a local and you'll be guided to the right person.

The lively sounds of the accordion accompany any celebration in Istria, be it a wedding, birth, or anniversary. It's often played in duos and accompanied by the singing of songs in Istrian dialect and Italian.

A style of singing unique to Istria is recognized by UNESCO as an example of intangible cultural heritage. Istarska ljestvica is a musical scale characterized by two-part singing: two singers sing simultaneously with an octave separating them. Instruments can also take the place of the second voice. Other traditional instruments include the bagpipes (the Istrian mih), and a woodwind instrument called sopele.

Standing the test of time

Keep an eye out for small cylinder-shaped shelters made entirely of stone perched in fields in central and southern Istria. Called kažun, these structures with low, open doorways were once used by farmers as shelters during rainstorms when out working their land.

These stone shelters have been around since Roman times and their walls were built with the dry stone technique which uses no mortar—making it all the more impressive that so many are still standing.

Time for a break

Food is a big part of life in Istria, a region known for its many gastronomic delights. The best place to sample local dishes is at a konoba, a traditional tavern. These are often family-run and set in rustic stone houses with cozy, intimate interiors and a relaxed atmosphere.

On the menu are typical Istrian dishes like maneštra, a hearty soup of vegetables and beans, handmade pastas called fuži and njoki (gnocchi), and kupus (sauerkraut). These are washed down with local white malvazija or red teran wines, rounded off with a shot of rakija (brandy) to complete a perfect meal.

On the path of history

Istria's many walking and bicycle trails are a draw for hikers, cyclists, and lovers of slow travel. A popular trail is the Parenzana, named after the narrow-gauge railway built during the Austro-Hungarian Empire in 1902. The train that once chugged along this route linked the port city of Trieste to the Istrian coastal town of Poreč, carrying not only passengers but also cargoes of wine, salt, olive oil, fruit, and coal.

The railway was dismantled in 1935 during Italian rule and abandoned for decades until it was resurrected into a 76-mile-long cycling and walking trail in 2006. The scenic route traces the train's erstwhile path while passing through three countries: from Trieste in Italy, it runs along coastal Slovenia, completing its trajectory on Istria's western coast.

Thank you! Your submission has been received!
Oops! Something went wrong while submitting the form.
Last Updated
June 15, 2021 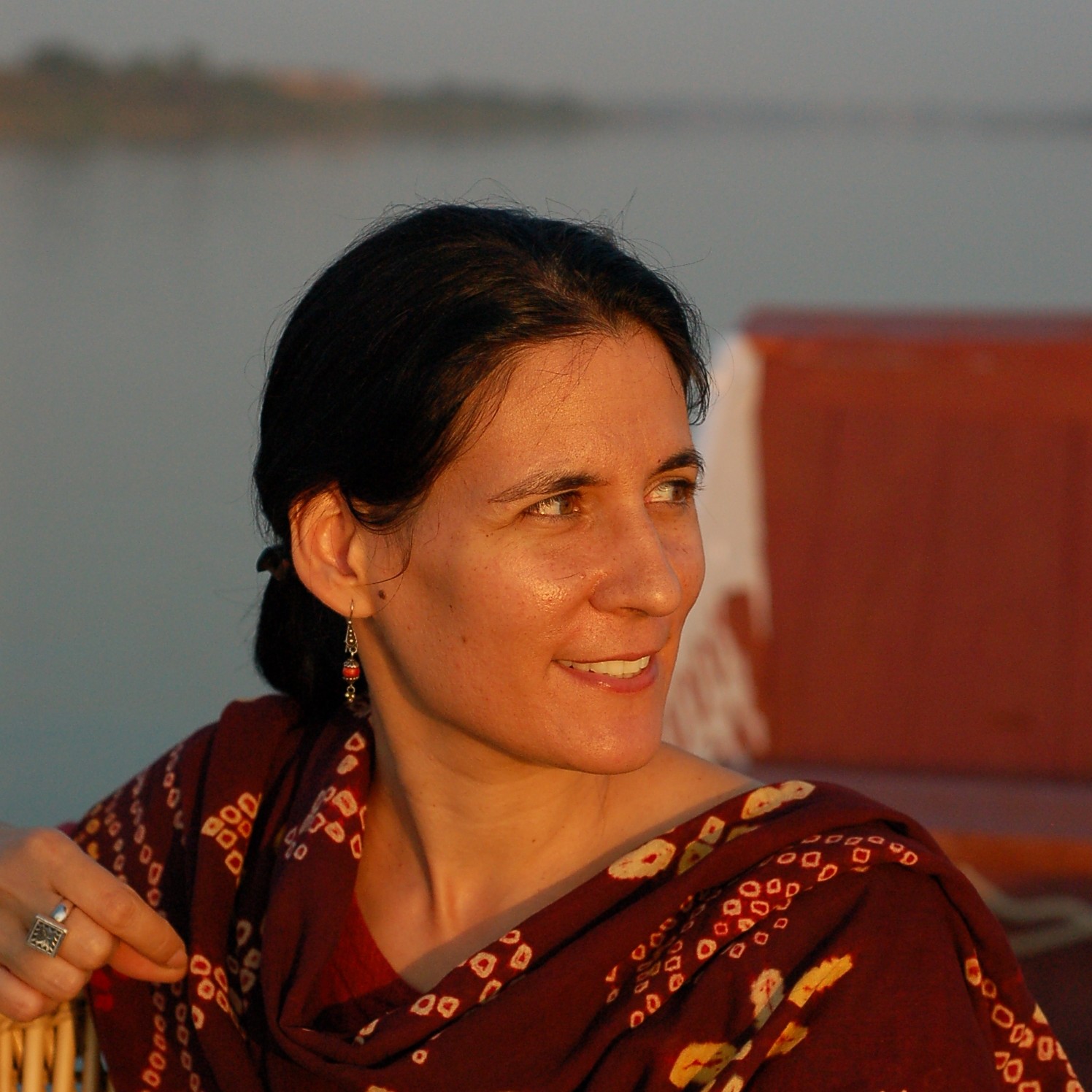 Isabel writes about travel, hotels, food, arts and culture, and green living. Her words and images have been published in inflight magazines and online at Lonely Planet, CNN Travel, Fodor's, Time Out, and Euronews. A serial nomad, she has lived on three continents and visited close to 50 countries. Home is currently a hilltop village in Istria, Croatia.