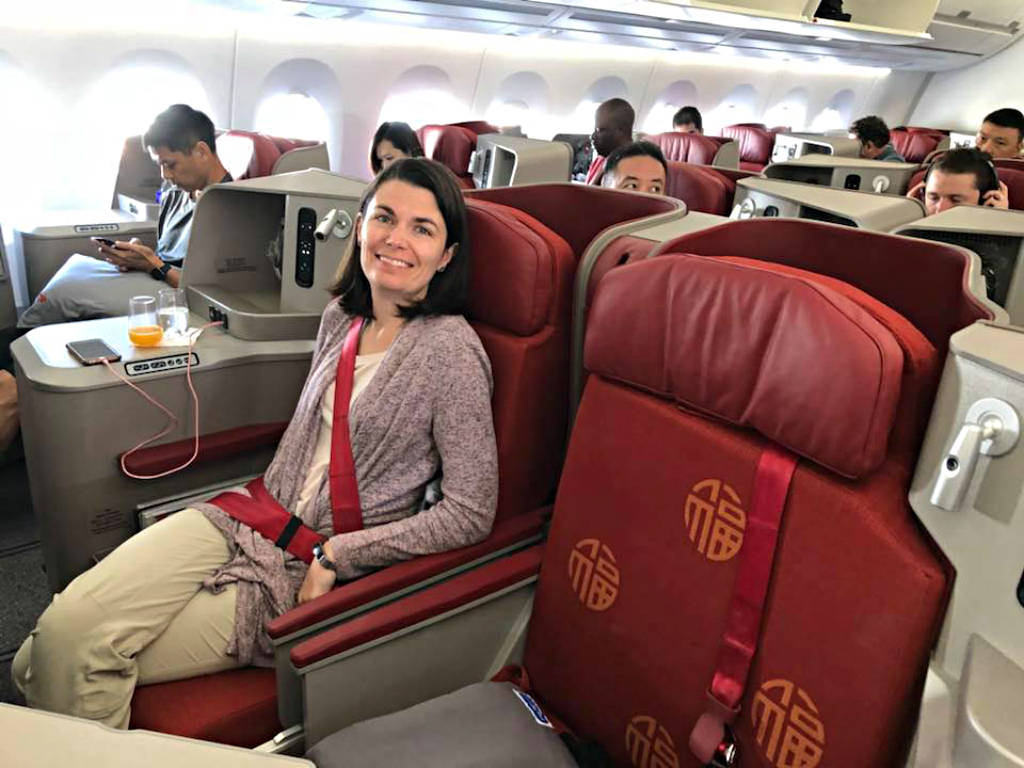 The words “cheap” and “business class” rarely go together, but if you’ve got dreams of lie-flat beds and champagne in the sky, there is hope. It is possible to find affordable business class airfare; you just need a little bit of luck on your side (or a lot of points and miles) and the ability to act fast when you find a spectacular deal.

First, how much do business class flights typically cost?

As with all flights, that's going to depend on a number of factors including the route, the dates, and when you buy your ticket. But in general, typical international business class flights can range from $3,500 to $5,000+ roundtrip.

Again, this greatly depends on a number of factors including whether it's a Mistake Fare (when the airline prices the flight much lower than it meant to) or if it's just a discounted fare. If it's a Mistake Fare, you could snag an international business class flight for as low as $300.

Generally, a good deal on an international business class flight is anything under around $2,700. Scott's Cheap Flights now sends business class deals (along with first class and premium economy) to our Elite members. For our deals we look for prices in the $500s to Mexico and the Caribbean, around $1,200 to Latin America, $1,700 to Europe, and $2,200 to Asia.

Mistake Fares are the holy grail of cheap flights, and they happen when an airline accidentally prices a flight much lower than intended—as much as 90% off usual prices. When that happens with a business class fare, it could become as cheap or even cheaper than a typical economy fare.

There’s no secret to finding Mistake Fares; you just have to get lucky, or you need to be running dozens of flight searches every day, like our team of Flight Experts does. Mistake Fares in business class are pretty rare. In 2020, we found about a dozen, mostly domestic and to the Caribbean and Latin America, along with two to Europe and one to West Africa.

Some of the business class mistake fares we’ve previously sent members include:

The key in snagging a mistake fare: act fast. Most Mistake Fares don’t last more than a day, and some disappear within hours.

>> Here are three things you need to know about Mistake Fares.

3. Use points and miles to buy a business class ticket.

As far as cash output, the “cheapest” way to snag a business class seat is often by purchasing it with credit card points or airline miles. The amount of points you’ll need to spend varies (just as with a cash price, point redemptions can fluctuate often) and there may not be award availability on every flight, but you may be able to score a business class seat for as low as 25,000 points.

There are a ton of resources available (such as The Points Guy) to help you get started earning points, and many cards offer signup bonuses worth 60,000 or more points when you spend a certain amount in the few few months.

4. Book an economy ticket and upgrade with points.

If you don’t have enough points to purchase a business class seat at booking, you can purchase a main economy seat and, if there is award availability on the flight, use your points to upgrade.

A few caveats: first, make sure there is award availability before you book the ticket you plan to upgrade, and second, make sure you book a fare class that is eligible for upgrades. Some, like basic economy, are not eligible for any upgrades, even those paid with points or cash.

5. Book an economy ticket and upgrade with cash.

Often times, as it gets closer to the departure date, if there are several unsold business class seats on a flight, the airline might offer an upgrade for purchase at a reduced rate. You may get an email in advance or you might see the option when you check in online.

If neither happens, you can always ask at the check-in counter or at the gate. Sometimes you can snag a business class seat at a very low upgrade price at the last minute.

6. Book an economy ticket and bid on an upgrade.

Some airlines, including Norwegian Air, Iberia, and Icelandair allow passengers in certain fare classes to bid on an upgrade to a higher class. Typically, if you are eligible the airline will send you an email, but you can also check your airline’s policies and use your confirmation code to see if you’re eligible and place your bid.

On the bidding page, the airline will typically offer a suggested price that’s more likely to be accepted (and usually there is a minimum bid) and include details on when you’ll find out if your bid was accepted.

In order to place your bid, you’ll need to input your credit card info. If your bid is accepted you will be charged immediately. The bid is a new, additional amount (in addition to the amount you’ve previously paid) that you’re willing to pay for the upgrade, and typically you bid separately on the outbound and return flights.

Airlines do occasionally put their business class seats on sale, however, while the price might be a significant discount off the regular price, it’s highly unlikely that the prices they offer would ever qualify as “cheap.”

For example, if a business class seat from Los Angeles to Paris typically goes for around $3,000, the sale price might be around $2,000. While it's not what most people would call cheap, that’s a big savings over the usual cost.

Join Scott's Cheap Flights Elite and find out when prices for business class seats drop—sometimes by up to 90%. Join nearly 2 million members and get cheap flight alerts sent right to your inbox.

Flight Booking
How to Book a Long Layover and Get More Travel in One Trip
By
Scott Keyes
Jan 22, 2019

Flight Booking
How to Book an Open-Jaw Flight Deal
By
Scott Keyes
Aug 19, 2019