How to Find Cheap Flights to Hawaii 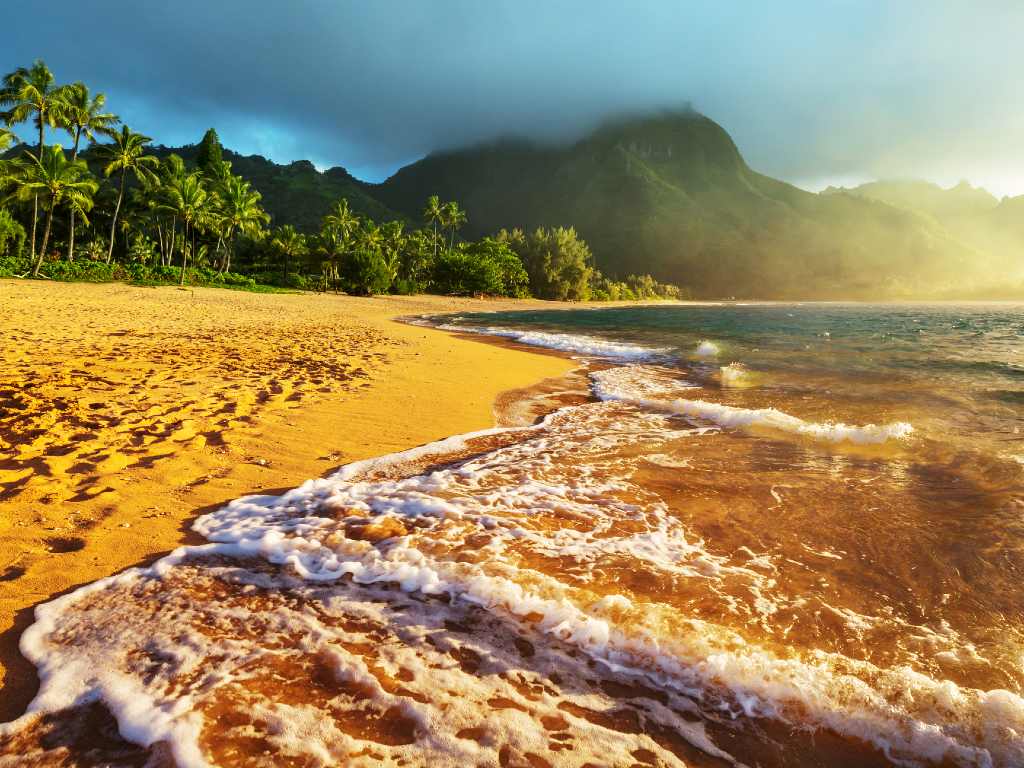 No matter where you’re traveling from, there’s something especially magical about a Hawaiian getaway. The world seems to agree; 9.4 million visitors flocked to the tropical archipelago in 2017 alone, enticed by miles upon miles of picture-perfect beaches, adrenaline-fueled outdoor adventures, top-notch resorts and restaurants, and rich local culture.

At Scott’s Cheap Flights, we frequently find our members roundtrip flights under $200 to the islands, so we're often asked for advice on booking travel to the 50th state. That’s why we put together this guide, detailing everything you need to know about finding cheap flights to the Hawaiian islands. From the best time to buy to what airline to fly and which island to fly through, we’ve got all your Hawaiian cheap flights needs covered.

How much does it cost to fly to Hawaii?

The cost of a flight to Hawaii varies according to dozens of factors, from points of origin and planned travel dates to flash sales and other unexpected events. We compiled the below to give you a general overview of average ticket prices as well as deal prices for roundtrip flights to Hawaii, based on our extensive flight research.

Where should I go in Hawaii?

While all beautiful, each of Hawaii’s islands offers something unique that might attract different travelers in different ways. You’ll want to factor in all your needs, including budget, schedules, and personal interests, before deciding where to land.

What are the best islands to visit in Hawaii?

Each of Hawaii’s five most populated islands offers its own particular charms.

With nearly 5.7 million recorded visitors in 2017, Oahu is by far Hawaii’s largest tourist destination. Honolulu, the state capital and chief air travel hub, is teeming with big city draws like nightlife, restaurants, shopping, and cultural attractions including top-tier museums and historical monuments like Pearl Harbor. Waikiki is packed with beachgoers from all over the world, while the North Shore, with its many sprawling resorts and surf-friendly shores at Waimea Bay and Sunset Beach, is more relaxed.

The Big Island also attracts its fair share of vacationers with black sand beaches, crashing waves, dense tropical jungles, and towering active volcanoes. Kona and Hilo are smaller than Honolulu but both are well-stocked with restaurants, shops, nightlife, and other amenities. Cultural attractions like museums and historical sites can also be found throughout the island, as well as tourist-friendly farms and busy farmers’ markets.

A favorite among outdoor enthusiasts, Maui is famous for its serene beaches and lush, diverse landscape. Kaanapali and Wailea are prime surfing, swimming, and snorkeling locales and there’s plenty of hiking paths and winding roads to explore, including the famed Road to Hana, and Haleakala National Park, home to the world’s largest dormant volcano.

Kauai and Lanai are quieter and more remote than their neighbors, the perfect getaways for nature lovers in search of off-the-grid fun in a gorgeous setting. Rainforests, green gardens, sweeping canyons, picturesque beaches, and hiking trails culminating in epic views dominate these laid-back islands.

>> Read our travel guide to Maui

What are the major airports in Hawaii?

Hawaii encompasses just 10,931 square miles and comes in as the 43rd largest state in area, about the same size as Massachusetts. But for a relatively small landmass, the archipelago is home to a significant number of high-traffic airports.

What is the cheapest island to fly into in Hawaii?

In general, most deals fly into Honolulu International, which, according to an official FAA passenger boarding data report, was the 28th busiest US airport in 2017 with upwards of 9.7 million passengers. Deals to the Big Island mostly fly into Kona, host to more than 1.7 million passengers in 2017, followed by Hilo, with nearly 665,000 passengers that same year.

Our experience shows that Honolulu sees the most frequent deals, followed by Kona and Hilo. But, Southwest has made flights to Maui and Kauai much more frequent since launching direct routes from California in 2019.

When should I go to Hawaii?

When is the best time to visit Hawaii?

This wholly depends on your own needs, interests, and schedule constraints (you may want to ask in our Travel Community for personalized advice), but in general:

Is there a high and low season in Hawaii?

December (particularly around the holidays) is considered high season in Hawaii, when winter break crowds hit their peak and costs surge. November sees the least amount of tourists, in general, followed by May, September, and October. June, July, and August are also very busy months, as it’s peak summer travel time, especially for families.

Weather-wise, winter (December through February) brings relatively cooler temperatures (around 78° F at sea level), some overcast skies, and intermittent rain showers. During the spring months (March through May), temperatures rise though rain is a bit more frequent early on, then it turns dry and sunny by May. Summer is dry and hot, averaging 85° F at sea level, with clear skies and bright sunshine, followed by dry, warm air and slightly cooler temperatures in autumn.

What are the major festivals, activities, and holidays in Hawaii?

Surfing is one of Hawaii’s most popular activities, and the prime season for catching waves runs between November and March each year. Consisting of the Hawaiian Pro, Vans World Cup of Surfing, and Billabong Pipe Masters, the Van's Triple Crown is one of the world’s top surfing competitions and takes place on Oahu’s North Shore during November and December.

Whale watching, another extremely popular tourist draw, is at its best between the months of December and April, with peak season falling from February to the first few weeks of March. Prime stargazing, including frequent meteor showers, happens over the summer.

January welcomes the Ka Molokai Makahiki Festival, a statewide cultural event with festivities scheduled throughout the month. Once known as Aloha Week, the Amazing Aloha Festivals are now a two month affair spanning over 300 cultural events across all the islands beginning in September. Dubbed the “hula olympics,” the Merrie Monarch Festival takes over Hilo every April with dance performances and competitions. The Big Island’s 10-day Kona Coffee Cultural Festival (November) and the massive, three-weekend-long Hawaii Food & Wine Festival in Maui (October), cater to foodie crowds.

On June 11th, the state celebrates King Kamehameha Day, a public holiday paying tribute to Hawaii’s founding monarch, Kamehameha the Great. Chinese New Year (February) is also a popular holiday, with many events occurring in Honolulu’s vibrant Chinatown. And, US national holidays like Independence Day (July 4th) are recognized, as are most Christian traditions like Christmas and Easter.

What’s the cheapest month to fly to Hawaii?

As with many places around the world, Hawaii is cheapest to fly to in January and February. April and September through November are also typically cheaper months to fly to Hawaii, while the peak months of June and December (particularly around the holidays) see the highest prices.

What’s the best time to book flights to Hawaii?

We recommend booking your flights two to six months before anticipated travel if your dates are somewhat flexible, but that doesn’t mean to book anytime within that window; wait for a great price and book when you find a deal. If your dates are set in stone or you’re traveling in peak season, give yourself even more time to find a deal.

Last-minute deals are rare. Generally, once you get to about three weeks from your trip, the price will rise considerably.

How should I get to Hawaii?

We’ve separated this section into major commercial airlines and low-cost budget airlines. Budget airlines have less amenities and there are fewer to choose from, but they do offer more competitive pricing. Some full-service airlines have begun to offer basic economy tickets at a discounted cost to compete with these low fares, but you might end up paying extra for things like checked and/or carry-on luggage, seat selection, and onboard food and drink.

No matter which route you pick, be sure to weigh all your options before purchasing to determine the best value for your individual schedule and needs.

What major airlines have direct flight to Hawaii?

From the mainland US, some of the full-service carriers that have nonstop flights to Hawaii are: Air Canada, Alaska Airlines, American Airlines, Delta Air Lines, Hawaiian Airlines, United Airlines, and WestJet.

What are the best cities for layovers in Hawaii?

If your final destination is Maui, Kauai, the Big Island, or any of the other smaller islands, Honolulu (HNL) is an optimal layover location. Honolulu’s airport serves as Hawaii’s main hub and offers regular short flights to many of the other islands at a relatively low cost.

It’s also possible to fly long-haul into Kona from both Tokyo Haneda and Narita. Similarly, many long-haul itineraries from Australia, New Zealand, or Asia on Hawaiian Airlines may allow passengers to connect directly to the smaller islands at reasonable prices.

If you’re coming from the East Coast of the US or from Europe, booking the cheapest ticket you can find to a West Coast hub like Los Angeles, San Francisco, Seattle, or Portland, Oregon is a good option, as each of those airports offer direct flights across the ocean to Hawaii on smaller airlines for less money. It may be cheaper to book these as two separate roundtrips (one roundtrip from your home airport to LAX or SFO and then another roundtrip from SFO to Hawaii, for example) rather than book everything together.

What are the Covid restrictions for traveling to Hawaii?

Domestic travelers must show proof or vaccination or proof of a negative test no older than 72 hours before departure in order to bypass quarantine. Travelers without either will have to quarantine at their expense for 10 days. Beginning March 26, 2022, there will be no COVID-related requirements for arriving domestic passengers. The indoor mask mandate will remain in place statewide.

Join Scott's Cheap Flights and save up to 90% on airfare. Get airfare alerts delivered right to your inbox and never miss a great deal to Hawaii.

Thank you! Your submission has been received!
Oops! Something went wrong while submitting the form.
Last Updated
December 14, 2021