Cheap Flights to Bali | From $440 Roundtrip 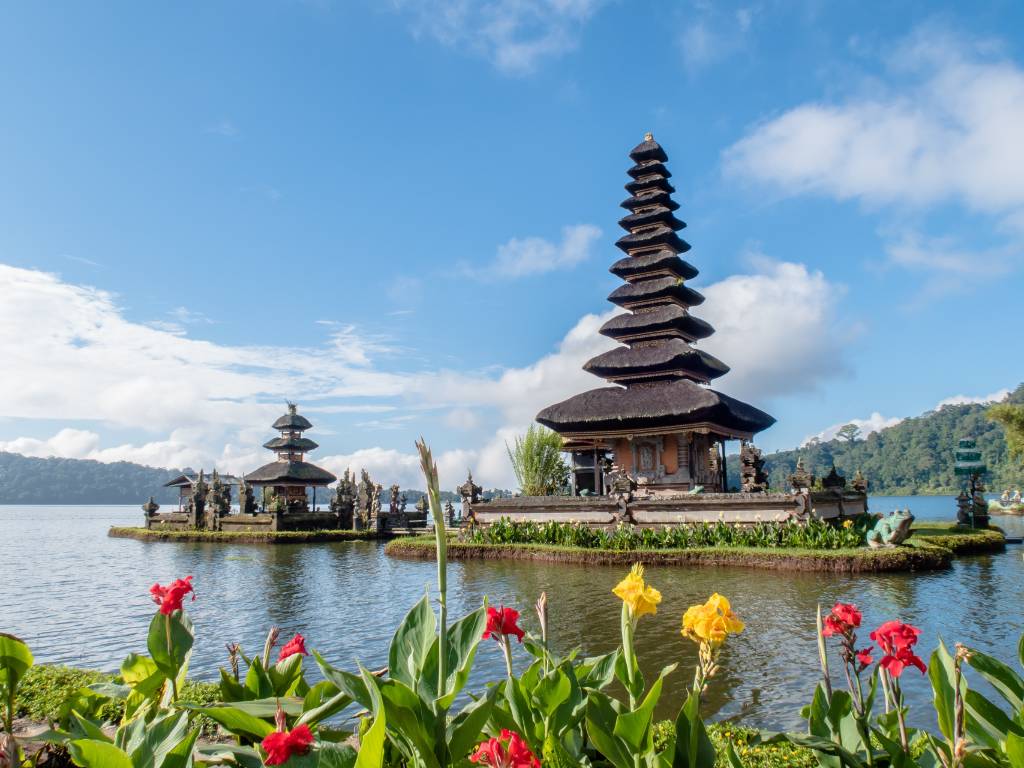 Bali has long been a favorite vacation destination for a number of reasons. There are ornate temples to see, lush rainforests to explore, and plenty of local dishes to taste. The balmy tropical climate inspires lazy days on gorgeous beaches, with a variety of water sports available to break up the day. What’s more, Indonesia (like much of Southeast Asia) is relatively inexpensive for many travelers, making luxury experiences well within reach.

Where is Bali, Indonesia?

Bali is perhaps the most popular destination within Indonesia, the Southeast Asian archipelago with more than 17,000 islands. Bali itself is concentrated primarily on one of those islands, though a few islands around the island of Bali are also included in the province of Bali.

Canggu sits on the southern coast of Bali and is known for its excellent beaches. The atmosphere in Canggu tends to be relaxed, combining beach vibes with numerous yoga studios. Surfing is a popular pastime, whether you’re just learning or more experienced. For a little nightlife excitement, look no further than another popular beach town nearby—Kuta.

Denpasar is the Balinese capital city and largest in the province. It’s the gateway for nearly all Bali-bound visitors (the international airport is located nearby). Denpasar isn’t just about funneling travelers elsewhere in Bali, however. There are fabulous beaches in Denpasar, including a much-loved surfing beach called Serangan Island. There are also historic temples and busy marketplaces to explore. For a more in-depth look at Balinese history, don’t miss a stop at the Bali Museum. The museum’s collection includes some ancient artifacts and artwork, plus a temple complex of its own.’

Ubud is among the most popular tourist destinations in Bali. This inland town has no sandy beaches to draw travelers, but its vibrant arts and culture scene more than makes up for that. Ubud is an excellent place to see performances of traditional Balinese dances and learn more about traditional art. There are a number of beautiful temples to see, too, as Ubud remains an important spiritual center. To bring the flavor of Ubud home with you, take a cooking class to learn how to make some local dishes.

In some ways, finding cheap tickets to Bali involves the same methods you might use to find cheap flights anywhere. Because Bali is so far from North America, however, not all of those tips and tricks will work. Here are a few of our favorite ways of finding cheap flights to Bali.

Try to be flexible with your travel dates.

When you’re looking for airfare, keeping your travel dates flexible gives you a higher chance of finding an airfare bargain. If you’re only looking at specific dates, you could miss a cheap fare a day or two on either side of those dates. Check the cost of tickets over a span of several days (or, better yet, up to a month).

One of the easiest ways to stay on top of the ever-changing cost of airline tickets without spending all day hitting the “refresh” button is by setting up an airfare price alert. You’ll be notified via email when the price on a particular route goes up or down, and can even track the cost of tickets over a few months so you’ll be confident that you’re getting a good deal. Keep in mind that if your travel dates are flexible, though, you’ll need to set up multiple fare alerts.

This is one of our favorite travel hacks. The idea is that if you can find a great deal on airfare into the general region you want to visit, you may find an equally great deal on a budget carrier from that airport to the place you actually want to end up. In the case of Bali, that means first hunting for low fares from your home airport into major hubs in Southeast Asia—think Bangkok or Singapore. The other half of the equation is finding a cheap ticket on a relatively short-hop flight to Bali on a regional airline. If you can find both of those, you may save yourself a packet of money.

There are some caveats to be aware of when using this trick, so read up before you start hitting the “buy” button. Here’s our short explanation of the Greek Islands Trick, a detailed how-to about how to find cheap international flights, and a rundown on the budget airlines in Asia.

Even if you live near a major international airport, it doesn’t hurt to check the fares from other airports that are reasonably nearby. Milwaukee residents, for instance, should look at the cost of flights to Bali from Chicago, while Portlanders should check out the fares to Bali from Seattle.

It may even be worth flying to that other city. For example, if you find a cheap flight from San Francisco or LA to Bali, you can then find a separate cheap flight from your hometown to that international departure city.

The timeframe for snagging the best deals on international tickets is, as you’d expect, longer than the one for domestic fares. With international flights, we recommend booking your flight 2-8 months before your trip. Remember that if your travel dates aren’t flexible or you’re traveling during the high season, you may need to book even further ahead.

While many tickets on long-haul international flights include one checked bag in the ticket price, there are plenty that do not. Cheaper fares (like “basic” economy tickets) sometimes charge extra for things like checked bags and seat selection, even if the flight is an international one, so traveling with only a carry-on suitcase can save you money. Plus, if you’re using the Greek Islands Trick we discussed earlier, you’re even more likely to have to pay extra for a checked bag on a regional budget airline.

Bali’s best weather is its dry season, for obvious reasons, but that also means that airfare is going to be at its peak. If you don’t mind the potential for rain, consider traveling at the edges of Bali’s wet season (for instance, October-November or March-April). And if the certainty of rain doesn’t even bother you, you could score super-cheap fares from December-February.

Use the best flight search sites.

Contrary to how it might appear on the surface, not all OTAs are created equally. There are several that we use regularly when hunting down the deals we send to members, and we think the stand-outs on that list are Google Flights and Momondo. With Google Flights, you’re able to look at fares both to and from multiple airports, while Momondo lets you quickly verify that you’re getting the absolute best deal on a ticket.

Let us do the fare searches for you. We’ll send you the best deals via email every single day, which allows you to keep an eye on the cost of flights to Bali and then be ready to book your ticket when the perfect deal lands in your inbox.

How to Get to Bali

Main US Departure Points to Bali

Join Scott's Cheap Flights and get deals like this delivered right to your inbox.

When are the cheapest flights to Bali?

To find the cheapest airline tickets to Bali, we recommend planning a trip during Bali’s low season (also its wet season), from November–March. You’re more apt to find cheap flights if you’re able to book your tickets between 2-8 months before your trip.

Why are flights to Bali so expensive?

There are several reasons why tickets to Bali tend to be on the expensive side. First, Bali is on the other side of the world from North America—it’s a long trip. Second, there are no direct flights from the US to Bali. Bali’s airport isn’t a major regional hub, so every trip from the US requires at least one and sometimes as many as three or four layovers. And finally, the list of airlines serving this route isn’t very long, which means less competition and incentive to lower prices.

Can I travel to Bali right now?

All travelers coming from the US must have a negative COVID-19 test within three days of their flight, or a letter from their doctor saying they’ve recovered from COVID-19 within the 90 days before their trip. In addition, there is currently a mandatory 7-day quarantine period in Jakarta for even fully-vaccinated US visitors.

How long is the flight to Bali?

As noted, flights to Bali from the US are often expensive. Once you arrive, however, visiting Bali can be quite budget-friendly. The price range for 3-star hotels is $30-60, and $5-7 will buy you a great meal. Bali’s fine dining options may even be less than $50 per person. Beer is about $2-4 per bottle.