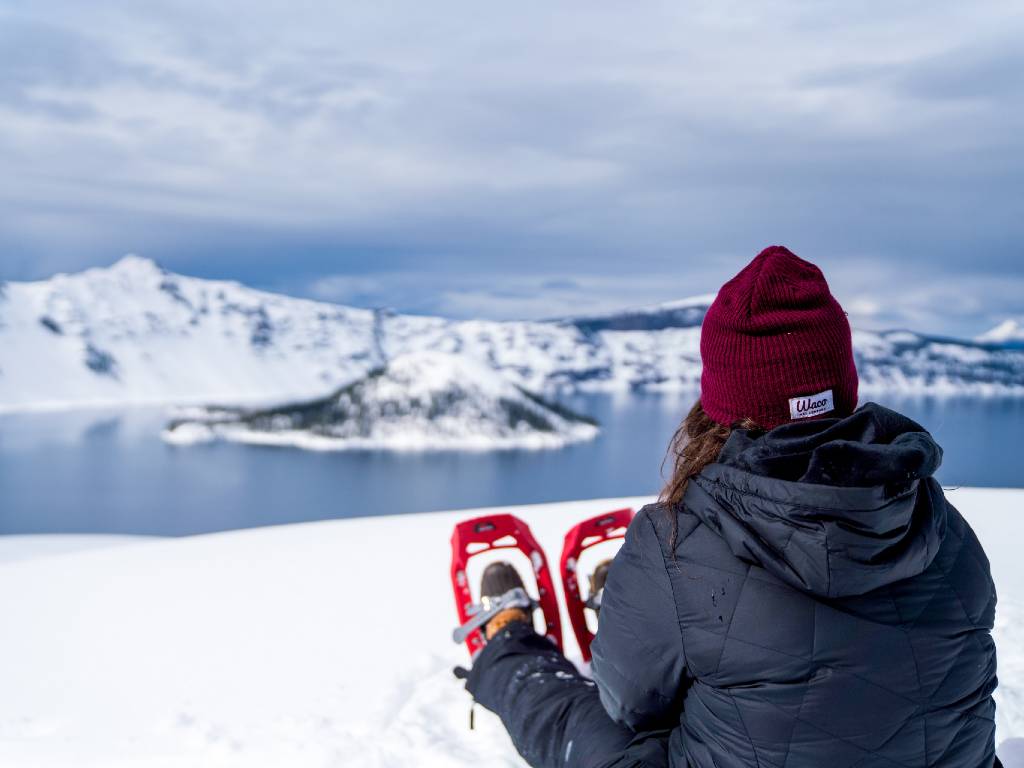 Wanderlust doesn’t take the winter off, which means travelers don’t, either.

Winter travel in the United States has a different vibe than summer travel, of course, but it’s not as limited as one might expect. Yes, there are plenty of places where the focus is entirely on playing in the snow and ice—but there are also plenty of options that don’t require extra layers of wool.

We hope you’ll find something below to inspire your next winter trip in the US, no matter what kind of winter experience you prefer.

Note: The places in this list are all in different stages of reopening and have varying levels of Covid spread. Some may be better suited for a future trip rather than right now. Be sure to research local status and restrictions before traveling.

Many travelers think “off season” and “winter” are synonymous, but anyone who lives for ski season knows the opposite can often be true.

Colorado is so full of top-notch ski destinations that it’s hard to choose just one, but picturesque Vail gets our vote. Vail Ski Resort is one of the largest in the country, with more than 5,300 snowy acres for skiing and snowboarding. There’s something for every skill level, including lessons for first-timers.You can fly directly into Vail or take a two hour car or bus ride from Denver.

Stowe Mountain Resort in northern Vermont got its start in the early 20th century as the birthplace of the National Ski Patrol in the United States. Today, it’s a haven for downhill and cross-country skiing, snowboarding, snowshoeing, ice climbing, winter mountain biking, and even winter zip lining. From Portland or Albany, it’s about three hours to Stowe by car.

Crater Lake is Oregon’s only National Park and a popular summer destination—but winter in the park is truly magical. There’s an average annual snowfall of more than 40 feet, making it one of the snowiest places in the country, and perfect for cross-country skiing and snowshoeing. There are free guided snowshoe walks led by park rangers, too.

Best for local drinks that’ll warm you up

Bourbon lovers don’t need to wait until the winter to tour Kentucky’s many distilleries, but sampling the goods on a tour of the Kentucky Bourbon Trail will certainly warm you from the inside out when the weather is cold (yes, it does get cold in Kentucky, with the average high in Louisville in January hovering around 40°F).

To satisfy a sweet tooth, consider visiting New York City during Valrhona’s annual Hot Chocolate Festival, during which you can taste all the takes on a camping classic from gourmet chocolate shops all over the city.

Best for viewing the Northern Lights

Mother Nature is notorious for putting on a show, and few are as other-worldly and impressive as the Northern Lights.

It’s hard to beat Alaska’s Denali National Park for the most spectacular aurora borealis shows in the world, let alone the United States. A combination of nearly 24-hour dark skies in winter and the park’s lack of development (and therefore lack of light pollution) mean the Northern Lights can be visible all day starting in the autumn.

In the lower 48, the best spots to see the Northern Lights are all at or near the Canadian border, like in northern Minnesota, Michigan’s Upper Peninsula, and northern Idaho, Montana, and North Dakota. Idaho’s Panhandle National Forest is just under 50 miles from the border (and about two hours from the airport in Spokane, WA), and the sparsely populated area means very little light pollution.

When your palate drives your travel plans, winter may not seem like an ideal time to venture out. But good food is good food regardless of the weather (and with fewer fellow travelers, it’s easier to snag reservations or avoid lines at the most popular spots).

Charleston, South Carolina, is a renowned foodie hotspot, and that status isn’t restricted to any one season. Southern cuisine takes center stage in the Lowcountry, with fresh seafood and local produce featured on menus all over town. Check out what’s fresh at the city’s farmers markets, open-year round thanks to the mild climate.

Winter weather in Oregon’s biggest city isn’t about snow—it’s about rain. Portland’s notoriously wet winters might make its food cart scene less appealing to some diners, but there are tents erected near most food cart pods for hardy souls (including locals) who won’t let the damp keep them from deliciousness. If you’d rather not bundle up just to eat dinner, however, the indoor dining options in Portland are equally plentiful and span cuisines from Thai to Russian.

>> Read our travel guide to Portland.

Best for avoiding the cold

Winter isn’t everyone’s cup of tea. The good news is that there are so many places in the country that are warm year-round, you don’t have to grin and bear the chill.

California’s Death Valley National Park (two hours from Las Vegas) holds the record for the hottest air temperatures ever recorded on earth (130°F), but that’s in the summer. During the winter, when the average high is more in the mid-60s to low 70s, Death Valley is the perfect place to escape the cold.

Winter in the Florida Keys hardly feels like it, with average low temperatures in the 65-67°F range and an average water temperature of 69-72°F, so it’s routinely warm enough to enjoy swimming and break out your summer wardrobe. Keep in mind that this is the start of peak tourist season, though, so you’ll want to book well in advance. Flights to Key West can be pricey; flying into Miami and then making the three-hour drive is often cheaper.

Best for being near (but not in) snow

Sometimes the best thing about snow is when it’s outside the window—where you can look at it from the comfort of a cozy room with a cup of cocoa and a good book.

Aspen, located three hours from Denver or two hours from Grand Junction, is an excellent place to ski, yes, but you don’t have to play in the snow to enjoy a Colorado mountain town that looks a bit like a real-life snow globe scene. Bundle up for a sleigh ride through the powder, check out the free Aspen Art Museum, or experience the town’s top-notch après-ski scene (which you don’t have to ski to enjoy).

Getting to Granite Hot Springs might be chilly, but you’ll forget all about it once you immerse yourself in the steamy water. Roughly 35 miles south of Jackson Hole, Wyoming, the outdoor pool is fed by a natural thermal spring in the Bridger-Teton National Forest, and it’s surrounded by beautiful snowy scenery during the winter months. Road access in winter is limited to snowmobiles, skiers, and dog sleds, but you can take a snowmobile tour to get there.

Traveling with the kids gives everyone permission to experience the unique joy of youth all over again, and that can be especially true when exploring a winter wonderland.

Childhood snow forts get a serious upgrade at the four Ice Castle locations around the United States (they’re in Colorado, New Hampshire, Utah, and Wisconsin). Each structure is created anew every winter and each one is a little different—but you can expect grand rooms and tunnels made entirely of snow and ice, including an ice slide. Night visits are especially magical, as the castles twinkle with thousands of colorful lights.

Yellowstone National Park makes for an epic family trip any time of year, but during the winter months it can be a special kind of adventure. Many roads are closed to traffic, but you can still see the sights on a guided snowcoach tour—including Old Faithful, the famous geyser. There’s even a program in West Yellowstone for kids to try all sorts of winter activities, including snowshoeing, cross-country skiing, and even dog-sledding.

When the black diamond runs don’t offer enough excitement, it might be time to try your hand at some other winter sports.

While the Iditarod is probably the most famous dog sledding event, Alaska isn’t the only place you can experience dog sledding for yourself. Some tour companies do the driving while you enjoy the ride, but for the more adventurous traveler there are hands-on options. You can do everything from learning to “mush” a team of dogs to caring for a whole team to taking multi-day dog sledding camping trips in places like Maine, Montana, Minnesota, Wyoming, Colorado, and (yes) Alaska.

Maybe you’ll never compete in the Olympic Games, but that doesn’t mean you can’t get a glimpse of what it might be like. A few former sites of the Winter Olympics are now tourist attractions, including bobsled tracks at Lake Placid (from the 1980 Olympics) and Park City (from the 2002 Olympics).

Sometimes the best thing to do when it’s cold outside is to stay inside, which is especially easy in cities that have an abundance of indoor must-see attractions.

For the sheer number of world-class museums that also happen to be free, it’s hard to beat Washington DC. The impressive Smithsonian museums are within a stone’s throw of one another, too, so you’ll be out of the cold in no time. Besides the Smithsonian collections, you can tour Ford’s Theatre or delve into intrigue at the International Spy Museum.

New York City is a culture-lover’s paradise. The locations included on 5th Avenue’s “Museum Mile” are the kinds of museums people travel great distances to see (the Metropolitan Museum of Art and the Guggenheim among them), and the popular American Museum of Natural History is a subway ride away. If theater is more your style, of course, there are always plenty of Broadway and off-Broadway productions to choose from.

Previous deals we’ve found to cities with lots to do indoors:

Snag amazing deals like these when you join Scott's Cheap Flights. Try it free for 14 days.

Thank you! Your submission has been received!
Oops! Something went wrong while submitting the form.
Last Updated
December 16, 2020