Amsterdam: The Northern European City With 300+ Miles of Bike Paths 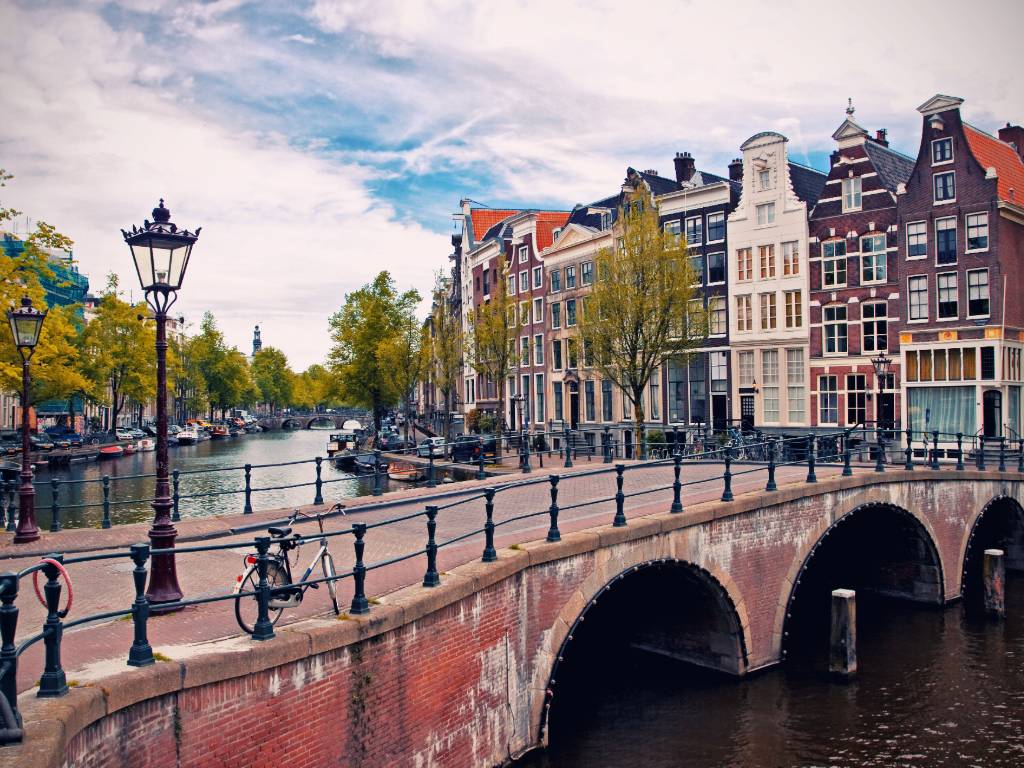 Bikes, canals, coffeeshops, tulips, the Red Light District... the list of Amsterdam icons is well known and draws an estimated 20 million tourists to the city each year. That’s about 20 visitors for every resident, making it understandable why Amsterdam is at the center of many conversations about overtourism.

But there is more to Amsterdam than these classic stereotypes, and despite the city’s popularity, even within the center of Amsterdam there are unique hotels, quiet canals, and revived landmarks and neighborhoods to explore away from the crowds.

No matter the weather or the number of tourists, there's one thing that will never change about Amsterdam and that's the popularity of cycling—some estimates even say there are more bikes in Amsterdam than residents!

It’s not just because this flat city is perfectly set up for easy cycling and has 300+ miles of bike paths. It’s also because legislation has been in place since the 1970s to prioritize cyclists over other road users, which came about in direct response to the increase in road traffic accidents as roads became busier and more dangerous.

Cycling is still one of the quickest and easiest ways to get across the city, but it's good to know a few things about cycling in Amsterdam first. Keep right on bike paths, don’t go too fast, and don't panic when you hear a bell ring behind you, as it's normally someone telling you they're going to overtake you.

A bed for every traveler

Amsterdam's hotel rooms are notorious for being expensive and small, but thanks to the growing interest in more sustainable travel, there is increasing demand for more eco-friendly and unusual accommodation alternatives beyond the usual tiny white box.

SWEETS hotel converted many of the long-unused old bridge houses across the city into luxury hotel suites, often in very central and unique locations, like in the middle of a mini man-made island on the River Amstel. For a more budget-friendly option, there's the possibility of a night in prison. Not at the expense of Amsterdam's authorities, but rather in Lloyd Hotel, a converted one-time prison that is a revered Dutch architectural monument and the world's first 1- to 5-star hotel, meaning there really is something for everyone.

And if those options are too urban, head west to The Unbound, where guests sleep in luxury wooden cabins under an open sky, feeling like they're lost in the countryside while still 20 minutes from the center of Amsterdam.

Boating off the beaten path

It's no secret that much of the Netherlands is built on land reclaimed from the sea. Indeed, parts of Amsterdam are 22 feet below sea level. So, how does the city not become flooded? Because of the very canals and waterways the city is famous for. They aren't there for aesthetic purposes only. They’re essential to Amsterdam’s survival because they contain and guide water away from the city’s urban sprawl and help prevent it from returning to the swamp it once was. However, the fact remains that the canals—which collectively stretch about 31 miles around the city—are a great way to see this picture-perfect city.

Skip the big tour boats, though, for something more unique. Plastic Whale boats tour the city's canals collecting plastic waste that gathers in the water while giving guests a private tour of Amsterdam's most famous waterways. Rederij Lampedusa explores the city’s canals and history on a boat that brought refugees to Europe's shores.

Alternatively, there are tours offering dinner, drinks, pancakes, and even a place to smoke weed aboard the Smoke Boat. Other ways to see Amsterdam from the water for those who like to be more active include kayaking, stand-up paddleboarding, or even "cycling" around on a pedalo.

Sex work is legal in the Netherlands, and in Amsterdam it is concentrated in the Red Light District, where workers offer their services from storefront windows often illuminated with a red light. But among the titillation of the area, it’s often forgotten that De Wallen, the medieval city center where the Red Light District is located, is Amsterdam's oldest neighborhood and rich in history and culture.

It's home to Oude Kerk, Amsterdam's oldest church, and Amsterdam's Chinatown, where you can find the city's best Asian food restaurants and one of the largest Buddhist temples in Europe. There’s also the Nieuwmarkt, one of the city's oldest markets, and close by is the Allard Pierson museum, which documents over 10,000 years of history as compiled by the archaeological department of the University of Amsterdam.

If finding out more about sex work in the Red Light District is still of interest, the most ethical way to do so is by taking a tour with PIC (Prostitute Information Center), an organization that supports sex workers.

There are two kinds of coffee shops in Amsterdam. Both serve coffee, but one also has a cannabis menu. Some come to Amsterdam just for the latter, but it's untrue that cannabis is a legal drug in the Netherlands. Rather, the official policy is to tolerate retail and recreational use under strict circumstances, including coffeeshops.

Love it or hate it, Amsterdam has a number of great coffeeshops that are safe and even quite sophisticated places for smokers. And whether you partake or not, you can learn more about the city’s history with the drug at the Cannabis Museum on Damstraat.

The other kind of coffee shop is another reason to visit Amsterdam, thanks to an increase in the number of independent coffee roasters, specialty coffee houses, and cozy cafes.

Amsterdam was arguably the world's most important port at the time that colonialism made coffee the global import it is now. Today, the vast majority of the indie and micro roasters are doing so with sustainability and fair trade in mind. Amsterdam roasters that are popular with local coffee (and cake) enthusiasts include Bocca on Oude Kerkstraat, Rum Baba Bakery and Roastery in Amsterdam Oost, and LOT61 in locations all over the city.

A secret (and sustainable) foodie's paradise

Not many choose Amsterdam for its food, and indeed the Dutch aren't exactly known for their haute cuisine. However, these are two unfortunate misconceptions because not only is Amsterdam a foodie's paradise, but traditional Dutch food, while admittedly stodgy and filling, has some real treats to be discovered.

There’s the heavily-spiced and thick-crusted Dutch apple pie, the heart- and stomach-warming stamppot and hutspot winter favorites (mashed vegetables and potatoes, served with warm gravy and sometimes sausage or other meat), and the unofficial national dish, rijsttafel, which is actually an Indonesian buffet-style feast of various curried dishes with pickles and rice.

Amsterdam currently has 21 Michelin-starred restaurants and myriad other award-winning, innovative restaurants and eateries. Sticking with the Dutch tradition of cooking seasonally, Amsterdam is a heaven for fans of sustainable cooking. There's farm-to-table favorite De Kas (which has its own greenhouse you can wander around), zero-emissions restaurant The Greanery, and InStock, which serves chef's menus using food that would otherwise go to waste.

The fast growth of Amsterdam in the late 21st century forced developments to expand into the long-neglected North (Noord), which until relatively recently was little more than a collection of scattered villages and purpose-built business headquarters and industrial buildings leading to the city's port in the west.

But Amsterdammers and visitors alike are now waking up to the appeal of Amsterdam Noord that offers quick access to the center of town thanks to free ferry boats from Centraal Station. It's also an easy journey to the picturesque windmill-filled Waterland areas farther north which are perfect for long walks or bike rides.

It’s in Amsterdam North that you'll find hotspots like urban beach club Pllek and NDSM Wharf, a converted warehouse used for street art, flea markets, festivals, and more. There are other cultural centers in the form of the new A'DAM LOOKOUT and the EYE Film Museum, which has some of the best views of the city.

The Dutch colonial empire comprised overseas territories in the Caribbean, Africa, and Asia, where for more than 250 years it exploited the labor of enslaved people.

As with many other European nations, the Netherlands has a complicated relationship with this part of its history and while discussions about colonialism, slavery, and racism are being had more openly and constructively, there is still much work to be done, not least because this period in Dutch history is still called (and celebrated as) the nation's Golden Age.

One way a more comprehensive history of Amsterdam can be understood is on a Black Heritage Tour which shares stories of Black Amsterdammers over the last 400+ years. Likewise, the Tropenmuseum, an ethnographic museum about the Dutch empire, has excellent interactive exhibits that are family-friendly. It’s located in a stunning 19th-century building in Amsterdam East, another often ignored multicultural neighborhood in Amsterdam that is home to the recently revamped Oosterpark city park and a vibrant daily street market on Dappermarkt.

The Dutch love of gezelligheid—an untranslatable term that encompasses a sense of "cozy togetherness"—means that much of the city's attractions are designed and managed with the whole family in mind.

Originating from when the Dutch word “gezel” was used to mean friend or companion, at its heart gezelligheid is about being with others, and a few days in Amsterdam will reveal how important it is to do gezellig things like having a drink with friends on a bar's terrace, a family picnic in a park, or dinner with a loved one.

In Amsterdam, to encourage as much gezelligheid as possible for all, accessibility is good on public transport, museums often have kids' guides and activities, and there are countless public parks with splash pools, flower gardens, space for BBQs and picnics, and numerous playgrounds.

Thank you! Your submission has been received!
Oops! Something went wrong while submitting the form.
Last Updated
March 23, 2022 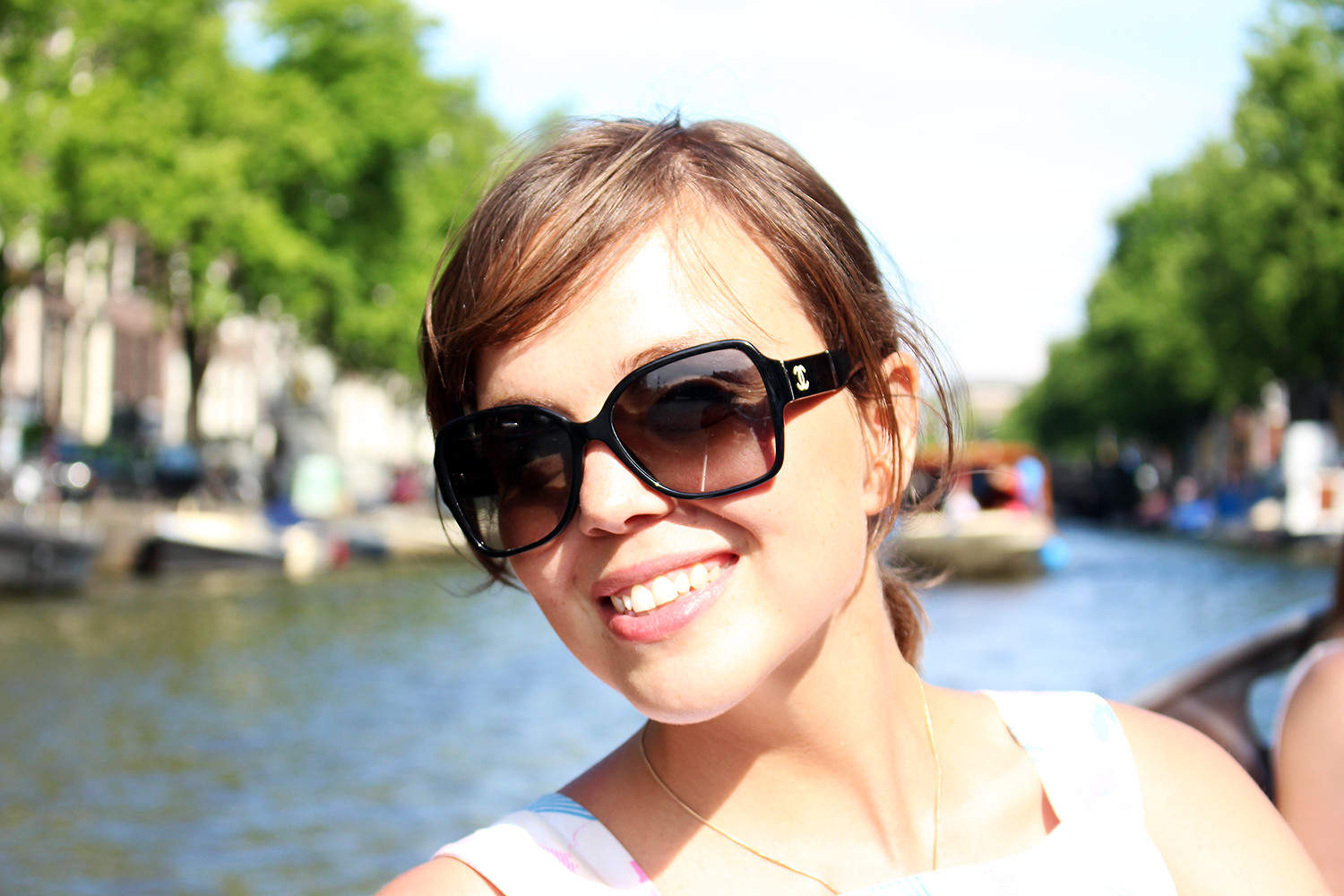 Frankie (she/her) is a freelance travel writer and author of contemporary fiction. Originally from London, Frankie came to Amsterdam for six months in 2013 and never left after falling in love with bikes, bitterballen, and borrels!