Everything to Know About Air France First Class La Première 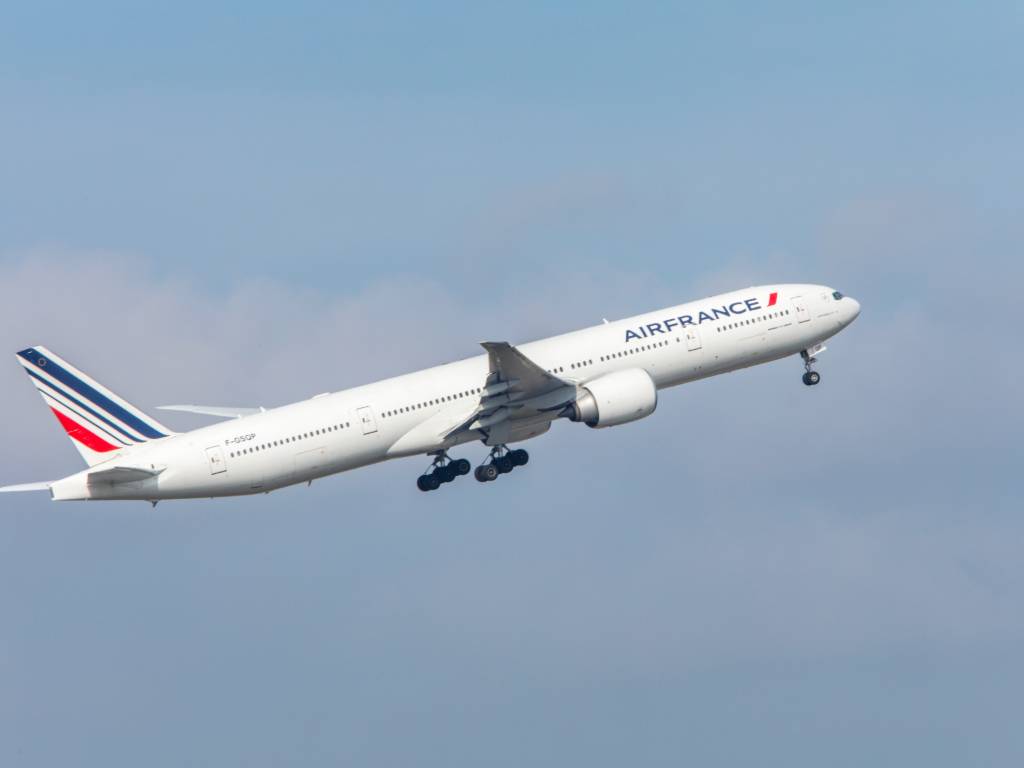 Available on the Boeing 777-300 in only a handful of nonstop markets, La Premiere is a refreshing antidote to some of the overbuilt “suite” seats on some other carriers, harkening back to the clean simplicity of an earlier era of luxury travel. Immaculate and exhaustively considered, La Première is one of the top tier first class cabins across the industry.

What to know about Air France La Première first class

La Première is denoted by Air France with a splash of bright red, but the ultra-private cabin of just four seats is decorated in soothing neutral colors. Specially-trained flight crews provide charming, unobtrusive service, from making up comfortable seats into luxury hotel-class beds, and serving meals designed by France’s top (often Michelin-starred) chefs. Little touches like bespoke Limoges porcelain and a crystal glass of still water set bedside at turndown set La Première in a class of its own.

La Première is also noted for its exclusivity. Mileage redemption is only available for elite members of Air France/KLM’s Flying Blue program and award space is not released to any partner carrier programs.

Some of the best deals we've previously found on Air France

With the La Première first class only available on select planes and routes, we haven't seen any fares yet dip into what we'd consider worthy of a Scott's Cheap Flights deal (but we're looking for them!). However, we have found several great deals on Air France business class.

In select cities, Air France La Première passengers can book transfers to the airport at New York JFK, Paris, and five other French airports—included in their ticket price—by calling the dedicated La Première number they receive at the time of booking.

La Première passengers benefit from dedicated check-in spaces, and are directed to a specific area at CDG Airport for check-in. From there, they’re fast-tracked through security and immigration formalities, then escorted to the lounge or to their aircraft. Longer distances include transfers in luxury cars across the airport ramp.

La Première passengers are entitled to check three bags up to 70 pounds / 32 kilos each. Flying Blue Gold, Silver, or Platinum members and SkyTeam Elite Plus members can check an additional bag. La Première passengers can carry on two bags plus a personal item, the combined weight of which should be less than 40 pounds / 18 kilos.

The Air France first class experience in the air

The La Première product is identical onboard every flight that offers it. It’s only available onboard the 777-300 series aircraft, and the cabin is always just four suites.

The suite is custom-designed for Air France and won’t be found on any other airline. While many carriers have elected to fully enclose their suites with permanent walls or half walls, Air France has chosen to keep their suites open, although passenger desiring privacy can raise electronically-operated solid partitions, or completely enclose their suite with a floor-to-ceiling curtain reminiscent of earlier days of long-distance overnight air travel.

The seat has an integral coat closet just behind, and an ottoman situated opposite the seat which becomes part of the flat bed, or is cozy enough for another passenger to join the suite to dine. The window blinds are electronic, controlled with a seat side switch, and there’s a range of lighting options, from full light to just the glow of the seat-side lamp at turndown. Passengers will also find a cozy cashmere through on their ottoman.

When it’s time to sleep, the seat becomes a fully flat bed, which flight attendants will outfit with a mattress pad, pillow, and duvet from the French luxury hotel brand Sofitel.

Pajama sets, socks, and slippers are also offered to passengers during boarding.

Breakfasts feature fresh-baked croissants and brioche, eggs made to order, often a pancake or waffle option, and fresh fruit.

Non-alcoholic beverages include Illy espresso or cappuccino served with a box of Michel Cluizel chocolates, or a selection of Fauchon teas.

Alcohol is included in the price of the ticket.

The liquor list is slightly upgraded over the Business Class cabin, with upgrades to the cognac and Armagnac selections.

What’s the difference between first class and business class on Air France?

How much does it cost for a first class ticket on Air France?

Fares are generally commensurate with distance. One of the shorter segments with La Première available is New York JFK to Paris, where one-way fares are rarely lower than $9,000. Air France sometimes offers significant discounts for roundtrip travel, sometimes from just over $4,000 each way. Fares are sometimes more competitive in markets beyond Paris.

How to upgrade to first class of Air France for free

Air France sometimes upgrades passengers to premium cabins for operational reasons; however, bearing in mind that the sky-high fares commanded by the La Première cabin are because of its exclusivity and seclusion, the airline also takes pains to maintain that atmosphere. It’s generally understood that complimentary upgrades into the La Première cabin are extraordinary.

How much does it cost to upgrade to first class on Air France?

Air France does sell last minute upgrades to La Première, both during online check-in and at airport ticket counters. On a recent flight from New York JFK to Paris, the upgrade was offered at the ticket counter from a Premium Economy ticket for just over $2,500. It’s worth noting that some benefits of traveling La Première (like airport transfers) require the La Première seat be confirmed more than 24 hours prior to departure.

How many miles to upgrade to Air France first class?

Air France tightly controls mileage redemptions in La Première. Upgrades in advance are only available from non-discounted paid (not upgraded or mileage redemptive) Business Class fares for passengers who are also Gold or Platinum members of the Flying Blue program (not SkyTeam partner programs). A recent mileage upgrade offer for a flight from New York JFK to Paris was for 255,000 Flying Blue miles (it’s worth noting the number of miles needed for a full mileage redemption one-way from the US to Paris at the time was 240,000 miles).

La Première on Air France is one of the most exclusive international first class products on the market, because of the restrictions on mileage redemptions. The experience is designed around the best of French luxury products and experiences, with a distinctive style and atmosphere that makes it unmatched among the world’s airlines.

At a time when demand for international first class is waning and many airlines struggle to differentiate their first class cabins from the ever popular and dynamic business class cabins, Air France continues to invest in keeping the La Première a pleasantly rarefied one.

What does Air France first class include?

Do you get lounge access with Air France first class?

Is food served in first class on Air France?

Yes. Multicourse fine dining from Michelin-starred French chefs is included onboard every flight in La Premiere.

How many checked bags do you get in Air France first class?

La Premiere passengers are entitled to check three bags up to 70 pounds / 32 kilos each. Flying Blue Gold, Silver, or Platinum members and SkyTeam Elite Plus members can check an additional bag.

What are the best seats in Air France first class?