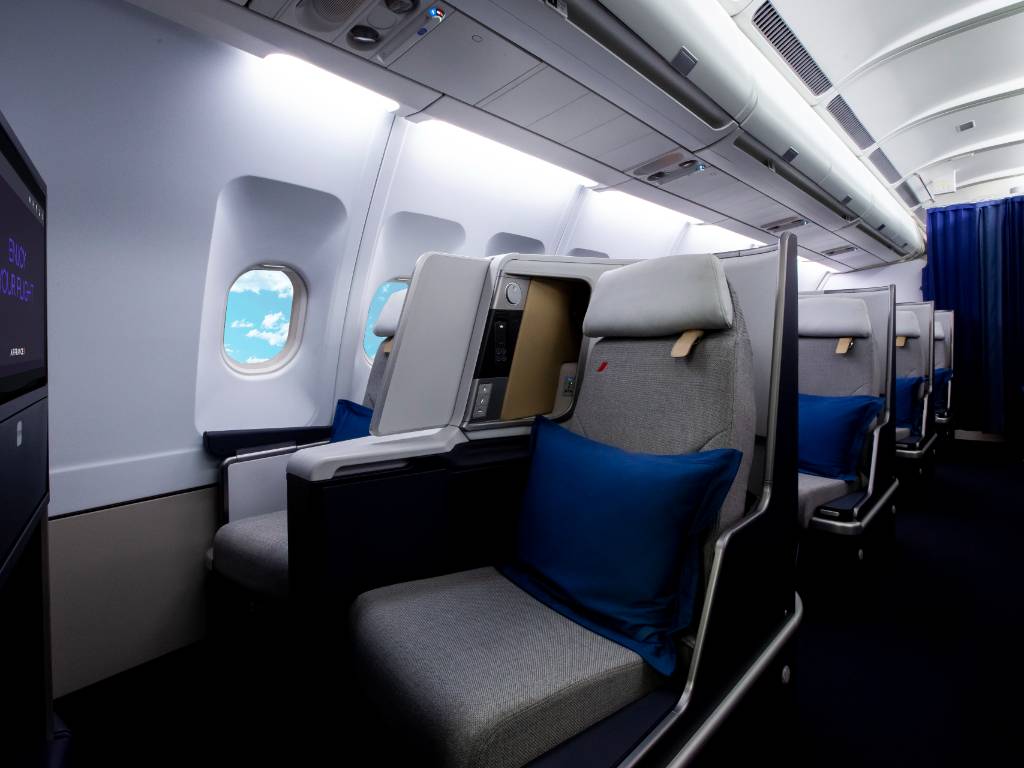 Air France has long been known for a charming, utterly French premium cabin product—which isn’t surprising, considering most “flag carriers” often take the opportunity to highlight their home country’s cultural traditions and products. It doesn’t hurt that France itself has already long been celebrated in western civilization for cuisine, wine, and fashion, and all of the elements make their way onboard the company’s intercontinental flights.

What to know about Air France business class

Air France offers Business Class on virtually all flights. The exceptions are French domestic flights that do not arrive or depart from Paris Charles de Gaulle Airport (CDG).

On domestic flights ex-CDG, as well as intra-Europe and flights between the United States and the Caribbean operated by single-aisle aircraft, Business Class is a “Euro Business” product with seating similar to Economy Class.

On intercontinental flights operated by widebody or dual-aisle aircraft, Business Class is an industry-competitive lie-flat seat.

A quirk: Air France cabins tend to run warm, and most Air France aircraft are not equipped with individual air vents.

The Air France business class experience at the airport

At New York JFK and Montreal airports, Business Class passengers on designated late evening departures can take advantage of “Night Service,” being served their meal (from the same menu as onboard the flight) in the lounge prior to departure, if they wish to sleep the entire flight. Passengers who elect to dine in the lounge can still have the regular meal onboard if they’re still hungry.

Air France operates its own lounges at many North American cities, while at some cities Air France and KLM operate a combined lounge. At cities without an AF/KLM operated lounge, Business Class passengers can use a Delta SkyClub, SkyTeam-operated lounge, or a designated airport or third-party lounge.

Air France Business Class passengers connecting to or from their Air France gateway on a SkyTeam flight are also entitled to use SkyTeam-operated and SkyTeam member lounges (such as Delta SkyClubs) throughout their journey.

Air France, like its SkyTeam partners, has standardized premium passenger services around SkyPriority. Elite members of member carriers frequent flier programs, plus Air France Business and Premium Economy passengers can use SkyPriority lanes at check-in, security at many airports, boarding gates, and at some customs inspection lines (mostly in Paris).

An agent is typically stationed at SkyPriority check-in areas to verify qualification.

The carryon allowance is standard for all classes higher than economy—a bag and personal item up to 40 pounds (18 kilos) combined weight.

The Air France business class experience in the air

Air France Business Class seating varies slightly depending upon the type of aircraft and the route. All intercontinental flights on dual-aisle aircraft have lie-flat seats.

Air France’s Business Class benefits are standardized around SkyTeam’s SkyPriority concept, with designated priority lines at check-in, security, and boarding. Business Class passengers not pre-boarding with their group number can board at their leisure using designated SkyPriority lanes at the departure gate.

Business Class passengers on intercontinental flights are offered a multi-course meal designed by a rotating cadre of top chefs.

Starters can typically include a premium protein such as foie gras, lobster or shrimp, often with a marinated vegetable salad and mixed seasonal salad with olive oil and vinaigrette dressing. Hot bread rolls are also offered with French butter (a concession to international tastes—bread isn’t traditionally served with butter at mealtimes in France).

A daily selection of cheeses (typically one hard, one soft, and one “wild card”) will also be found on the tray. As in France, this is meant to be eaten after the main course.

Main dishes are offered separately after the appetizer plate is cleared. Menus typically have three to four choices of main dish (unless a special meal to accommodate dietary needs has been pre-ordered). The main dish options almost always include at least a meat dish, a seafood dish, and a vegetarian dish. Sometimes two meats or two seafood dishes are on offer depending on the length of the flight and destination.

Desserts are often a selection of small sweets, offered with coffee, tea, and cordials. Most long haul flights have a self-service bar set up in one of the galleys, with snacks and beverages (and often individual servings of Haagen-Dazs ice cream) available. On some flights, hot snacks can be requested from the crew.

On most long-haul flights, a light meal or breakfast is served prior to arrival. For hot breakfasts, a choice of hot entrée is sometimes offered. Light snack trays for arrivals outside breakfast hours often do not offer a choice.

Passengers who prefer to skip a full breakfast and sleep in can request coffee and a pastry up to 30 minutes prior to arrival.

Alcohol is complimentary in the Business Class cabin.

The wine list (which includes champagne in all classes of service) understandably focuses on French wines, and there will often be a choice between two reds and two whites.

La Premiere, Air France’s first class, is only sold on select routes, on flights operated by the Boeing 777-300 aircraft.

The best description of the difference is perhaps the difference between a four-star and five-star hotel—Business Class is a comfortable premium experience, while La Premiere is bespoke luxury.

How much does it cost for a business class ticket on Air France?

A business class ticket on intercontinental long-haul routes can range between twice as much to several times the price of an economy class ticket on the same flight. A Transatlantic flight can range from $3,600 to over $6,000 roundtrip. At Scott's Cheap Flights, we find deals in the range for $1,700-$3,100.

How to upgrade to business class of Air France for free

While impossible to predict in advance, Air France sometimes upgrades passengers to a higher class of service for operational reasons. There is no published methodology for this, but like most airlines, Air France tends to show preference for elite members of Flying Blue, the airline’s frequent flier program.

How much does it cost to upgrade to business class on Air France?

Passengers booked in a lower class of service can rebook all or a portion of their itinerary in business class for the difference in fare prior to check-in, so passengers interested in flying Business Class should continue to monitor Business Class fares even after booking.

Air France will sometimes offer upgrades to Business Class during the online check-in process, but amounts vary. Passengers who choose to upgrade can choose to pay the full amount in either miles or cash, or a combination.

How many miles to upgrade to Air France business class?

The amount of miles to upgrade is not specified in advance. A recent check of upgrade space on a New York – Paris nonstop found upgrades available for 30,000 Flying Blue miles for a one-way upgrade.

Air France’s Business Class product is competitive with other airlines flying across the Atlantic—onboard aircraft configured with all aisle-access seating in the business cabin. The airline’s onboard service is distinctively French, and francophiles may prefer Air France solely for that reason.

For passengers connecting via Paris, the Air France lounges at CDG Airport are an additional draw, with a fine selection of hot and cold dishes, a full bar, and convenient shower suites.

Long-haul Business Class flights on Air France are also a quick way to earn elite status the Flying Blue program, which does not have a set spending requirement, counting only the length of flight and class of service in calculating points toward elite tiers.

Read more about flying in business class or on Air France

What does Air France business class include?

Do you get lounge access with Air France business class?

Yes. Whether an Air France, SkyTeam, or third party lounge, Air France Business Class passengers have access to lounges throughout their journey.

On intercontinental flights operated by dual-aisle aircraft, all Business Class seats on Air France are lie-flat.

Is food served in business class on Air France?

Food is served on all international flights on Air France Business Class, with the exception of some very short “tag” segments operated on dual-aisle aircraft.

How many checked bags do you get in Air France business class?

Business Class passengers are entitled to check in two bags, free of charge, up to 70 pounds (32 kilos) each. Flying Blue members with Silver or higher status can check an additional piece at the same weight.

What are the best seats in Air France business class?

On most Air France aircraft, there are few if any undesirable seats in Business Class—it’s mostly dictated by personal preference. Travelers can use SeatGuru to view the seat map for their flight and view feedback on each seat from previous fliers.