Get alerts for cheap tickets to the world's best destinations.

Get free alerts for cheap tickets

Score cheap tickets to destinations in the US and around the world.

At Scott’s Cheap Flights we do exactly what our name says. We help you find and book incredibly cheap airline tickets—on airlines you love (no bargain-basement airlines here) to places you want to go.

Those are real deals we’ve sent our members in the last year and they aren’t last-minute flights. Some of them are as far as 11 months out, so you can plan ahead.

We use a combination of sophisticated technology and human Flight Experts who spend all day, every day comparing flight prices. When prices drop—whether it’s for a few hours or a few days—we’re the first to know, and we alert you immediately so you can snag  those cheap tickets before they’re gone.

It’s simple. When you sign up, tell us which airports you’re able to fly from, and we’ll show you all the cheap tickets available from those airports at any given time. We even email the best deals directly to your inbox so you never miss a chance to score the deal of a lifetime.

When you find a deal you want, you book it directly with the airline.

How does Scott’s Cheap Flights work?

Follow the airports you want to see deals from. We’ll even recommend airports that often have great deals to your favorite destinations.

Our team of Flight Experts is constantly monitoring deals. As soon as one pops up from one of your airports, they’ll send the details straight to your inbox.

With price details, booking links, and estimates on how long deals might last, all that’s left for you is to book the deal, pack a bag, and put up a pithy OOO message. 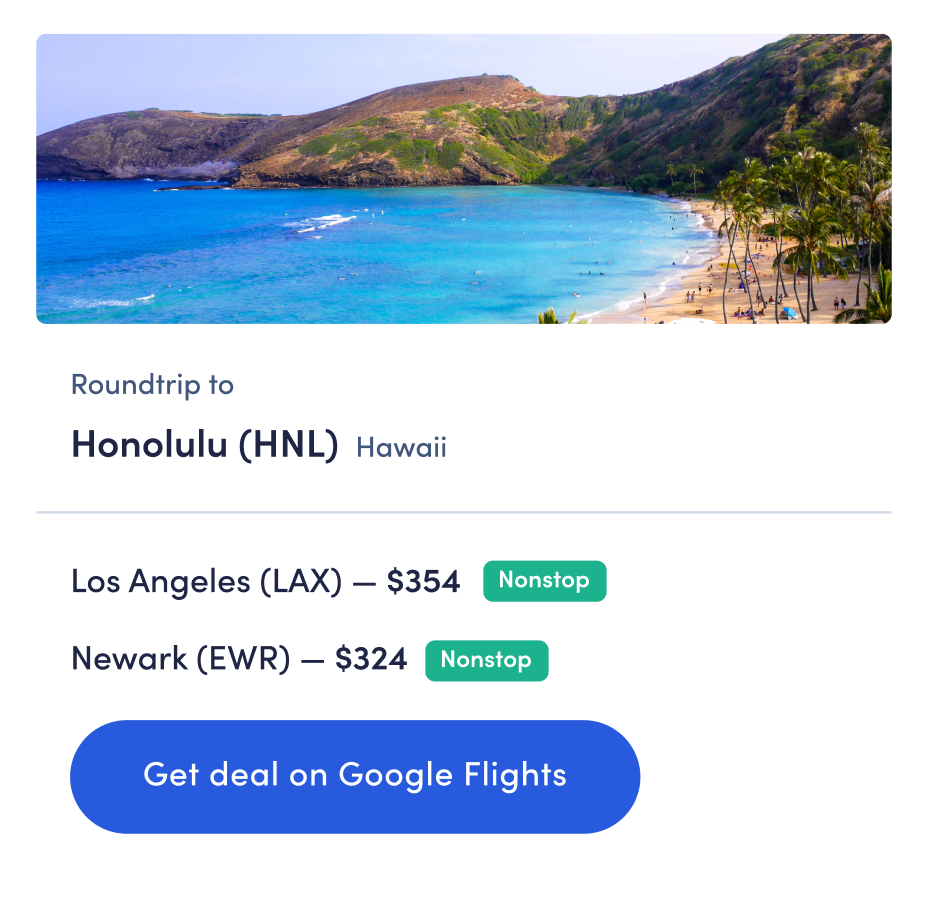 We do the hard
work for you

Every deal has passed the Bestie Test and been pre-vetted by Scott or one of our Flight Experts to ensure it's an amazing deal.

Most deals are for non-stop or single-stop flights with short layovers.

We don’t believe in sacrificing comfort for cost, so we only share deals from the best airlines.

How to find cheap tickets

While there are dozens of search sites for finding cheap tickets, Google Flights is our favorite because it offers the most tools and features to help you quickly search for flights and find the cheapest tickets.

If you’re more comfortable with one of the other search sites, use the one you prefer. Or if you prefer to book with a site where you can earn booking rewards, start with Google Flights to see all your options and then move over to the other site once you’ve chosen your flight and are ready to book.

No matter where you do your searching, the same best practices for finding cheap tickets apply.

Below check out our guides to finding cheap tickets with your OTA or flight search engine of choice.

Past deals our members have loved

Traveling like a cheap ticket expert means you’ll never overpay for flights again, whether you’re booking a deal the team at Scott’s Cheap Flights found, or hunting for cheap tickets on your own.

And if you don’t have the time or don’t want to spend hours searching for flights everyday,  let us do the work for you. We might even find you some deals to places you’ve never considered.

How about the Republic of Georgia for $500 roundtrip? St. Lucia for $250 roundtrip? Or Big Bend National Park for $180 roundtrip?

Whatever it may be, don’t let the next great deal pass you by. Sign up now.

Our Flight Experts search for flights to thousands of popular and off-the-beaten-path destinations around the world. Here are some stats about cheap tickets we’ve found to popular destinations.

Cheap tickets to Hawaii: We send our members alerts about cheap tickets to the Hawaiian islands of Maui, Hawaii (Big Island), Oahu, and Kauai. The cheapest flight we’ve ever found to Honolulu on Oahu was $138 roundtrip, and we frequently find deals under $200 roundtrip from the West Coast.

Cheap tickets to Atlanta: The cheapest ticket to Atlanta we have alerted our members to was $75. The average fare we have found to ATL is $146 roundtrip.

Cheap tickets to Puerto Rico: We frequently find amazingly cheap flights to San Juan (SJU) under $200 roundtrip. The lowest fare we’ve ever found was $23 roundtrip from Boston, while the average is $158 roundtrip.

Cheap tickets to Jamaica: The average cheap ticket price found by Scott’s Cheap Flights for a trip to Jamaica is in the $200s. The lowest priced fare we’ve found was $120 roundtrip.

Cheap tickets to Maldives: Cheap tickets to the Maldives are even more rare as these flights can typically cost $1,200 or more roundtrip, but we still find amazing deals. The lowest fare we’ve previously found was $571 roundtrip.

Cheap tickets to Japan: We search for and find cheap flights to several spots in Japan, including Tokyo (NRT and HND), Osaka (ITM), and Sapporo (CTS). The cheapest ticket we’ve ever found to Japan was $202 roundtrip to Tokyo.

Cheap tickets on Delta: Delta Air Lines is another of the major US carriers and we find many deals on Delta and its partners. Delta serves more than 300 destinations in 50 countries, and its main hub is Atlanta. In 2021, we found more than 900 deals available on Delta.

Cheap tickets on Southwest: Southwest is known as a low-cost carrier, as that’s how it got its start, but today it offers service comparable to American, United, and Delta, but often with lower total travel costs since Southwest offers two free checked bags and their open-seating policy means no seat selection fees. Because Southwest has a smaller route network than the other major carriers, we found fewer cheap tickets on Southwest, but in 2021 we still found 200+ deals for our members on Southwest.

Elite deals our members have loved

You deserve a vacation.